National Day is an opportunity to draw lessons and values from founding fathers, says Minister of Culture and Sports 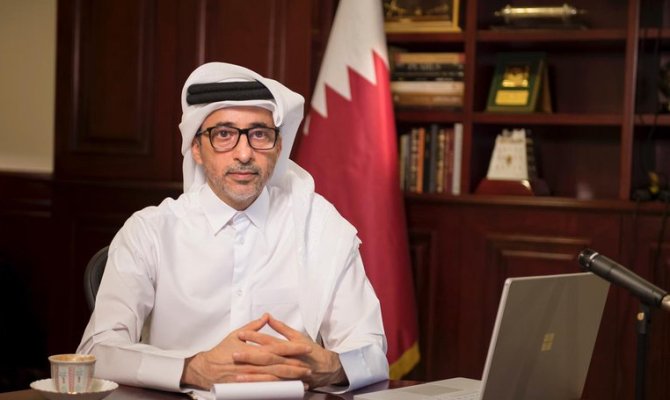 Doha, 17 December 2020 - HE the Minister of Culture and Sports Salah bin Ghanem bin Nasser al-Ali affirmed that celebrating the country’s National Day on December 18 each year “helps us renew our deep connection with the homeland and to draw the lessons and values of the founding fathers, led by the Founder Sheikh Jassim bin Mohamed bin Thani.”
In a statement to Qatar News Agency, al-Ali said that the National Day’s slogan this year “We praise you, the Lord of the Throne” expresses our adherence to the values of the ancestors, as Qataris have fought through the stages of their history several challenges and faced difficulties since Damsa Battle and other battles of Al-Hazm, Khannur and Al Wajbah, and also the Covid-19 pandemic and other challenges.
This national occasion is an opportunity to promote the original values on which the Qataris were raised and believed in, he said, adding that thanks to these values, they succeeded in achieving progress for our country and our society and with determination and work they proved their worthiness.
On this occasion, HE the Minister of Culture and Sports congratulated His Highness the Amir Sheikh Tamim bin Hamad al-Thani.
HE the minister referred to the words of the Founder Sheikh Jassim bin Mohamed bin Thani which express the conscience and thought of every Qatari in facing challenges, noting the leadership’s wise vision in dealing with various crises. On the most important efforts made by the Ministry of Culture and Sports to confront Covid-19 pandemic, he said that Qatar did so good in confronting the pandemic thanks to the efforts of the health sector and all state entities in the private and public sector and thanks to the awareness of its people and their concern for the safety of society.
The ministry has worked to meet the challenges of the crisis by providing its internal and external administrative services completely electronically, as it did before the pandemic, HE said, adding that the Ministry has also increased the frequency of cultural, youth and sports events and initiatives.
He noted the increase in community interaction and participation by all segments, especially young people, for whom the ministry was keen to enhance the culture of volunteering for them through programs specially prepared to serve all members of society, especially some groups such as the elderly, workers and people with special needs, as well as those in the front ranks in health sector.
HE the Minister of Culture and Sports affirmed that the State of Qatar is proceeding resolutely towards achieving its goals in all fields, internally and externally, thanks to the vision of its wise leadership.
The Qatari community was able to make achievements in development, construction and renaissance projects in various fields, he said, pointing out that he most important achievement is building self-capabilities within the Qatari community such as self-reliance and finding alternatives to achieve self-sufficiency. This was translated by all the achievements in economic fields, he added.
Sport achievements at the level of building and preparing modern stadiums show the extent of Qatar’s success in this aspect, a success that will go beyond the technical dimension, HE the minister said, referring to Qatar World Cup 2020 that will be an opportunity to demonstrate the Qatari values of belief in cultural diversity and rapprochement between peoples.