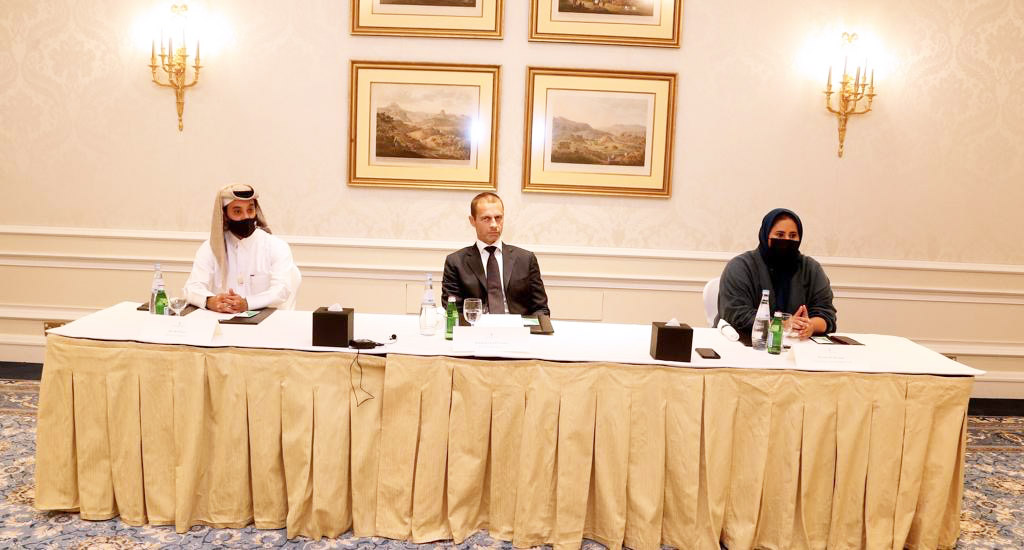 Doha, 18 December 2020 - "Qatar is impressively ready and looks set to host the World Cup like tomorrow," remarked UEFA President Alexsander Ceferin, who is in Doha for the opening of the fourth World Cup 2022 Al Rayyan Stadium which will be inaugurated with the Amir Cup 2020 final set to be played at 7pm on the Qatar National Day.
On Thursday, Ceferin in an interaction with journalists said he was quite impressed with Qatar’s preparations for FIFA World Cup 2022.
A former Football Association of Slovenia president and vice-president FIFA, Ceferin said, “I’ve seen quite a lot of it as FIFA vice-president as it was presented to us at the FIFA Council. But now when you come here, you are even more impressed.
“The interest is actually quite brilliant as much as I saw it now, I’m here since Monday. Except of a few exceptions in the stadiums that are getting ready, I think Qatar is ready to host the World Cup tomorrow. I think it’s really impressive how it looks and I am looking forward to come to the World Cup in Qatar.”
On the Qatar national team being in mix for European qualifying for the 2022 World Cup, Ceferin welcomed the move. “I think it’s a very good idea. Our federations were very positive about it. I think it is good for the Qatar national team to compete with the best and with all our respect, Europeans are the best!
“Qatar have a tough group, it will be interesting to play Portugal for example. It’s also a message to the world that football is one. Europe is open, we have players from all around the world, we have a global product. The UEFA Champions League is watched by 70% of people from outside of Europe. It would be a great experience for Qatar and a great message to the world that sport is about friendships,” he said.
Asked if he sees teams from this region playing in the UEFA Champions League someday, he opined, “Everything is possible in European football. It’s the biggest competition in the world of sports. Promotion of the brand outside Europe is also important bit we will need a very competitive team to compete in the UEFA Champions League.”
About the issue of racism in football, Ceferin said there was no place for racism in football. “Football is reflection of society and football fans are a reflection of the society. I know and I am sure that 99.9 of football fans are not racist but there’s a small number of people who use football matches to show their idiotic ideology. We have to fight them and we are fighting them but we need help from the governments.
“We need education of small children to understand what is racism and what is every discrimination. We have to get rid of those people who use football to express their ideologies. It's a fight that may last for years but we will win.”
On the impact of the coronavirus pandemic on European football, Ceferin said it was substantial but was sure of things bouncing back. “Only the postponement of Euro 2020 has cost more than 100mn euros. European football's losses due to the coronavirus pandemic you could count in billions but from the other point of view, we’d be the first ones to come back.
“The moment we will have spectators back at the stadiums and the moment we can have a normal match, we will be back. And I am not afraid for European football. We are still in good shape. We had quite serious reserves of funds so we are fine if this does not continue for a few years which I think is a pessimistic view. I am sure 2021 will not be as bad as 2020,” he concluded.