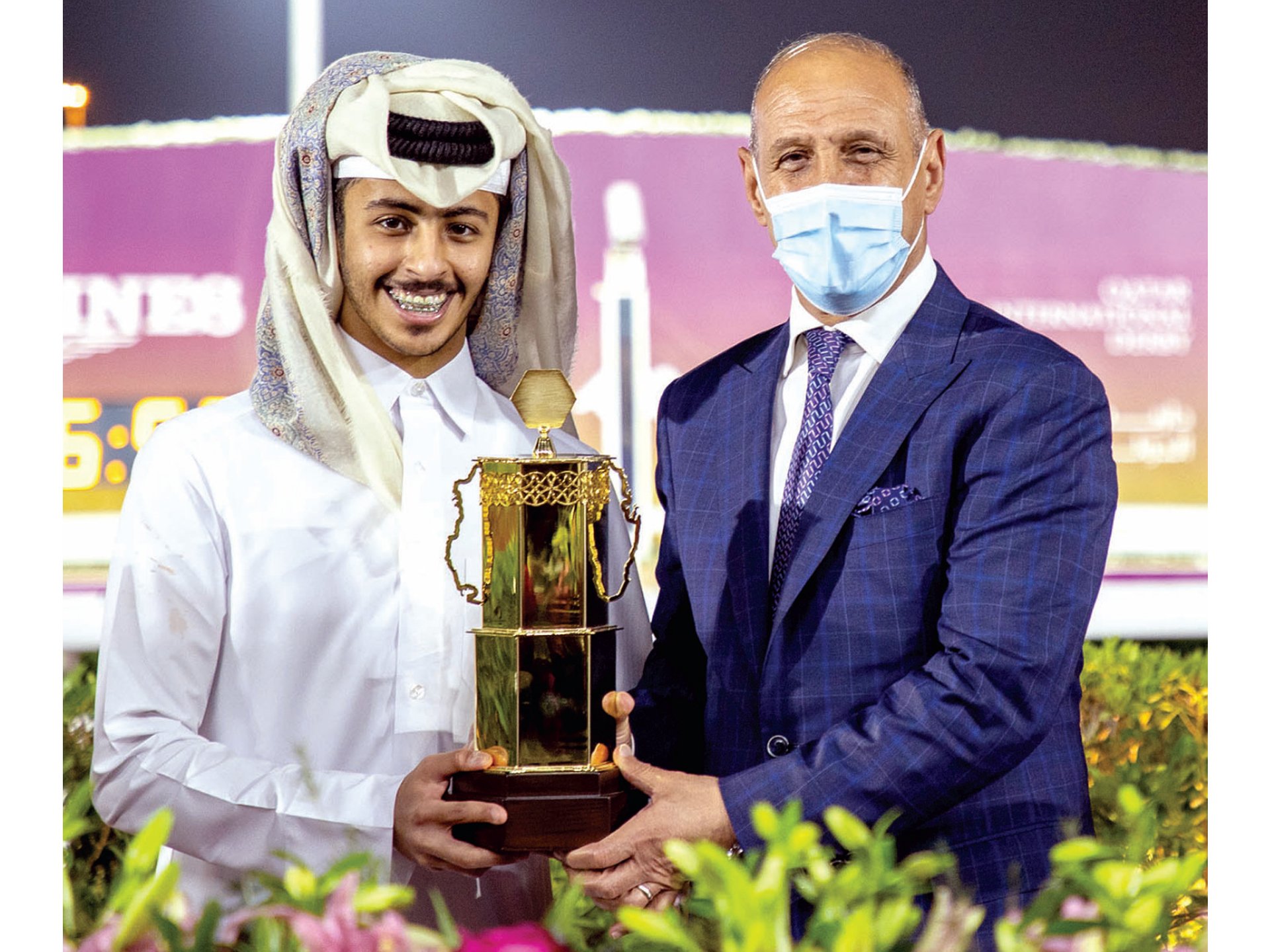 Doha, 20 December 2020 - Faleh Suwayed Al Ajami’s Glitter Queen (Night Of Thunder x Ile Flottante) brushed aside a forgettable Guineas outing from a month ago to race to a smashing victory in the Qatar Oaks (F) (QA Gr 3) (Far Bend) (3yo TB) at Al Rayyan Park turf on Saturday. Hamad Ahmed Al Malki Al Jehani trained filly had finished 10th over a mile in the Gr 3 Guineas after a promising third in the Oaks Trial earlier in November.

Saturday’s step up in distance to 2000m, however, did not seem daunting as Ronan Thomas raced his fourth winner of the day to consolidate his top spot in the jockeys’ standings. Thomas had his mount stay on the rails midfield early on before dropping back in the order briefly. However, coming off the bend, Glitter Queen upped the pace and surged forward to win by two and three quarters lengths in front of Hassan Ali Alabdulmalik’s She's Our Queen (Toronado x Dyna Bowl), ridden by Faleh Bughanaim for Deborah Amanda Clare Mountain. Gassim Mohammad Ghazali trained Forced (Lethal Force x Danehill Revival) was ridden to third by Marco Casamento in the colours of Meshaal Bin Ali Al Attiyah.

Sheail Bin Khalifa Al Kuwari’s Soldierpoy (Sepoy x Lamps Of Heaven) had shown promise with two Class 2 wins in his first two starts in Qatar, the last one being a month ago over seven furlongs. On Saturday, the bay horse landed the Al Rayyan Stakes (Far Bend) (2yo Thoroughbreds) to complete a hat-trick at Al Rayyan Park. With French star jockey Julien Auge astride, the Mohammed Hussain Afroz saddled gelding started the packed 16-strong C&D run from Gate 2, and tracked the leaders early on. Coming off the bend, Auge gave his mount the go-ahead and Soldierpoy responded, surging forward and building a healthy lead, eventually winning by four and a half lengths. Abdulhadi Mana Al Hajri’s Jimmy Sparks (Zoffany x Gale Song), ridden by Ivan Rossi for Stefano Ibido, was second ahead of Injaaz Stud’s POM MALPIC (Pomellato x Havanna Lady), helmed by Tomas Lukasek for Ali Yousuf Al Kubaisi.

Al Shaqab Racing’s Al Efreeta (Dahess x Dormadora) was trainer Alban Elie Marie De Mieulle’s fourth winner on Saturday as the bay filly landed the  Qatar Oaks (F) (Far Bend) (4yo PA Fillies) comfortably. The win was third for jockey Ronan Thomas who had also guided the filly to a victory on her mile-long Qatar debut in a maiden a week ago. A step up in distance to 2000m did not upset the 4yo’s credentials around Al Rayyan Park as she surged forward to grab the lead and then held on to beat Tomas Lukasek ridden Challenge De Ghazali, owned by H.H. Sheikh Mohammed Bin Khalifa Al Thani, by two lengths at the post.

Umm Qarn’s Al Khisah (Toast Of New York x Bint Al Sahra) stayed unbeaten racing to her second consecutive C&D victory on Saturday. Having landed the Oaks Trial last month under Ronan Thomas, the Alban Elie Marie De Mieulle trained filly partnered with the jockey once again and the result was once again the same in the  Qatar Oaks (F) (Far Bend) (3yo Local TB Fillies). The bay filly was unstoppable out of Gate 1 as she build a considerable advantage to win by five and a quarter lengths in front of Injaaz Stud’s Thamina, ridden by Jason Watson for Mohammed Hussain Afroz. The win was third on the day for De Mieulle.

Sheail Bin Khalifa Al Kuwari’s Unbutton(Cable Bay x Undress) led a one-two for trainer Gassim Mohammad Ghazali in the Sawda Natheel Stakes (Fillies & Mares) (Class 2) (Far Bend). In the six-furlong sprint on Saturday, the British recruit had Marco Casamento for company on her Qatar debut and despite a wider start than most, Unbutton claimed the lead making good use of a weight advantage to win by a length in front of Luchador, ridden by Alberto Sanna in the colors of Khalifa bin Sheail al-Kuwari.

Al Shahania Stud’s Alf Lyla (Mared Al Sahra x Ultafa Al Maury) went one better than her debut outing last month to land her first win. On Saturday, in the Local Purebred Arabian Plate (3 Year Old Fillies) (Far Bend), Julian Colin Smart’s ward had stepped up in distance lining up in Gate 1 for the miler under Tomas Lukasek. The bay filly stayed on and surged forward to build a comfortable gap on the home straight, winning by two and a half lengths in front of Alexander Reznikov ridden AJS Beirut.

Umm Qarn’s Muqla (Tabarak x Sarahmina) went one better than her last two C&D outings to shed her maiden status in fine fashion on Saturday. Helmed by Ronan Thomas on all three runs in Qatar so far, the Alban Elie Marie De Mieulle saddled 3yo had narrowly missed out on victories but that changed this time round. In the Purebred Arabian Plate (3-Year-Old Fillies) (Far Bend), Muqla kept her line coming out of Gate 1 and went past the post one and a quarter length ahead of stablemate Yaqhar, ridden by Soufiane Saadi.

Al Shaqab Racing’s Mkayns (Dahess x Kado De Ghazal) and jockey Ali Khalid Al Mosallam combined well for their second straight outing together landing a C&D victory on Saturday. After shedding her maiden status earlier this month, the Alban Elie Marie De Mieulle trained 4yo lined up for another six-furlong sprint, this time the Purebred Arabian Handicap (Far Bend) (75 & below). The filly, despite a weight disadvantage, had little trouble making an impressive down the middle of the track to win by one and a half lengths. The win was the apprentice jockey’s tenth this season.

Jassem Mohammed Al Badi’s Qatar Gold (Atlantic Air x Thurayya) was not quite at his best last time round a month ago. However, a step down in distance and a switch of surfaces did the trick for the Gassim Mohammad Ghazali trained colt as the 4yo landed the Local Thoroughbred Maiden Plate (Far Bend) in dominant fashion on Saturday. In the seven-furlong run on turf, Marco Casamento was astride the bay colt and the duo, despite the widest start in a 16 strong field were unstoppable finishing a massive ten lengths ahead of the competition.