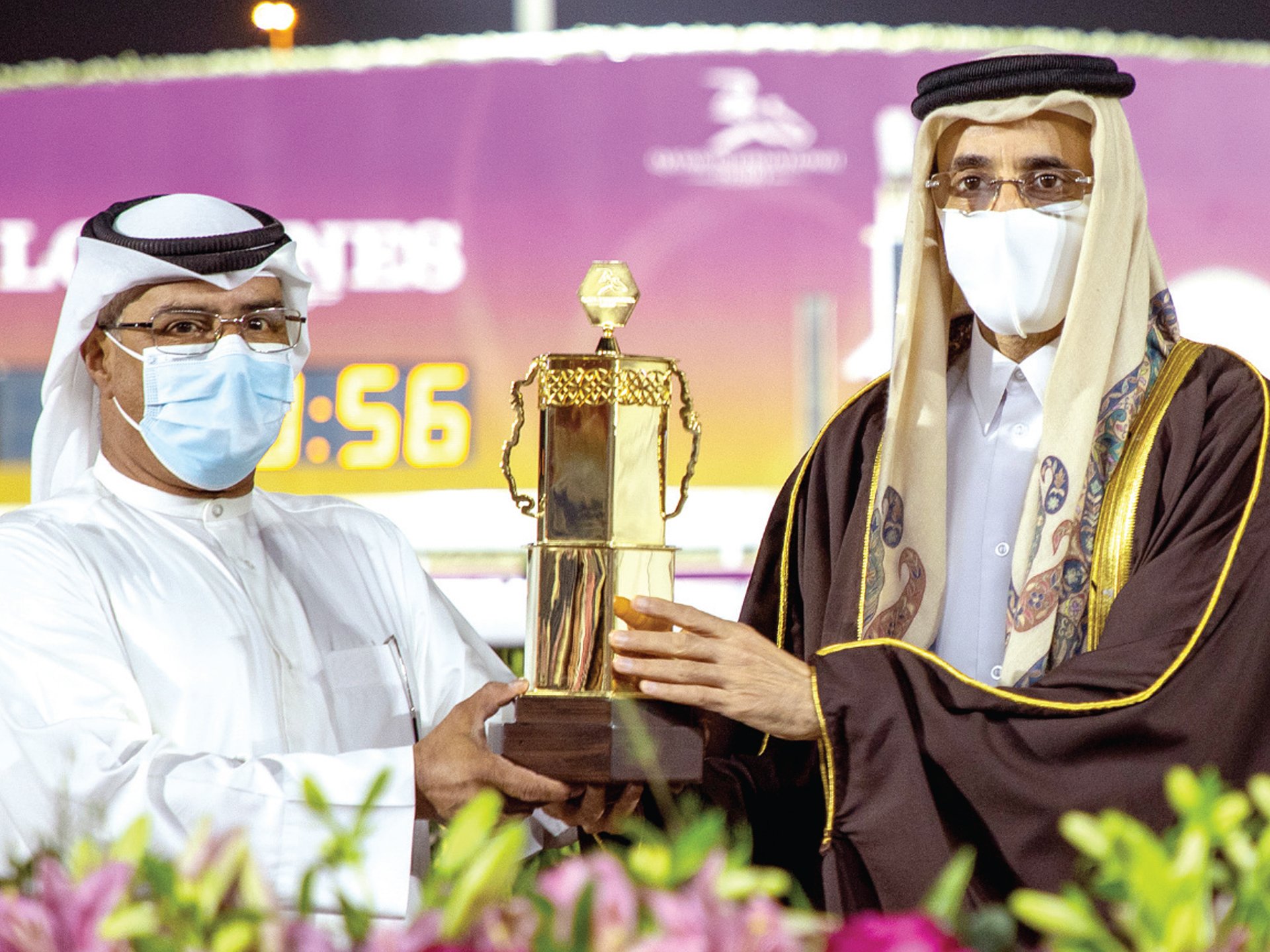 Doha, 21 December 2020 - Injaaz Stud’s Hellenistique showed an amazing turn of foot at the business end to land the Qatar Derby (QA Group 1) on his Al Rayyan Park debut, even as Khalifa bin Sheail al-Kuwari’s Lady Princess won the Qatar Derby Arabians feature, in the presence of the Minister of Culture and Sports HE Salah bin Ghanem bin Nasser al-Ali.

Earlier in the evening, Umm Qarn colts Antar and Equinoxe bagged the derbies for three-year-old Arabians and local Thoroughbreds respectively.

In the US$500,000 finale, Marco Casamento and his partner Hellenistique, saddled by Zuhair Mohsen, went past the entire 14-strong field in the final 400m after a slow start to win the 2,000m turf feature. Julien Auge, who was earlier astride Lady Princess, guided King Pacha to second handing Mohsen a one-two in the feature.

“It was only the first time that he (Hellenistique) ran this track, but I feel he improved quite a bit having trained with me over the course of the last month (since the move from France). My rider (Casamento) did exactly what was expected of him, and the horse responded well too. I am really happy,” said Mohsen after the win.

After landing the Al Rayyan Stakes on Saturday’s Oaks Day, Auge was astride the winner in the Arabian feature on the Derby Day. A year ago, the General filly had missed out on winning the Derby for three-year-olds, but yesterday a timely nudge from the jockey meant that Lady Princess was pulling away from the field in the final furlong. The Thomas Fourcy ward won by almost three lengths as Alban de Mieulle missed out on a hat-trick after Umm Qarn’s Jabalah finished second under Soufiane Saadi.

“I would like to gift this win to His Highness The Amir Sheikh Tamim Bin Hamad Al Thani for Qatar National Day,” an ecstatic al-Kuwari said after the win yesterday. “This was a big race with some high quality horses, and I am so happy,” al-Kuwari added. Trainer De Mieulle and his wards continued making waves at the Qatar International Derby Festival yesterday, after saddling four winners on the Oaks Day on Saturday.

First up for the Frenchman and Umm Qarn colours was the Atlantic Air colt Equinoxe who followed up his dominant victory in the local Thoroughbred Guineas in November with another scintillating win in the Qatar Derby for local Thoroughbreds yesterday. In the process, the Ronan Thomas-ridden colt led a one-two for the trainer and the connections as Dream Boy was ridden to a nice second under Saadi.

“I know that Equinoxe had won well last time and so I knew he can do it. But I am very pleased with Dream Boy. He came back very well. I was very disappointed with him last time. When he started, he beat Equinoxe easily, but after that he was not the same. We just couldn’t find the button for him. But today he has come back well,” De Mieulle said.

The owner-trainer-jockey trio returned to the winner’s circle half-an-hour later as Thomas guided Antar to his second straight victory in Qatar, this time landing the Qatar Derby (Group 3 PA) over a mile.

Thomas whipped the Al Mamun Monlau colt into action a furlong out, and the bay horse got to its business taking the lead and held on for a half-a-length victory. Auge-ridden French raider Hm Jalfane, trained by Thomas Fourcy, ran out of real estate and had to settle for second.

A fantastic ride by Alberto Sanna saw Al Jeryan Stud’s Hajaj win for only the third time in Qatar as the six-year-old ward of Hadi Nasser al-Ramzani bagged the seven-furlong Thoroughbred Handicap run for horses rated 75-95. The owners had another win yesterday as Harry Hotspur won a Thoroughbred maiden.

Half an hour after Hajaj’s victory, Sanna was astride yet another winner, this time Majed Seifeddine’s ward Wilyan. Having impressed in a six-furlong maiden sprint more than a month ago, Saeed bin Mubarak al-Jafali al-Naimi’s colt successfully stepped up in distance to a mile in the Local Purebred Arabian Plate for three-year-olds.

Mohamed Hussain-trained Dukhan overcame a wide start and traffic to land the local Thoroughbred Handicap event for horses rated 80 and below in a cozy finish yesterday. Ridden by Luca Maniezzi in the colours of Dhafi Rashid al-Marri yet again, the four-year-old colt and the rider have now combined for two wins this season.

It was Injaaz Stud’s Rodina that opened the day with a Local Purebred Arabian Handicap win under Saleh Salem al-Marri.