Jassim Al Kuwari’s double in dressage to top round 3 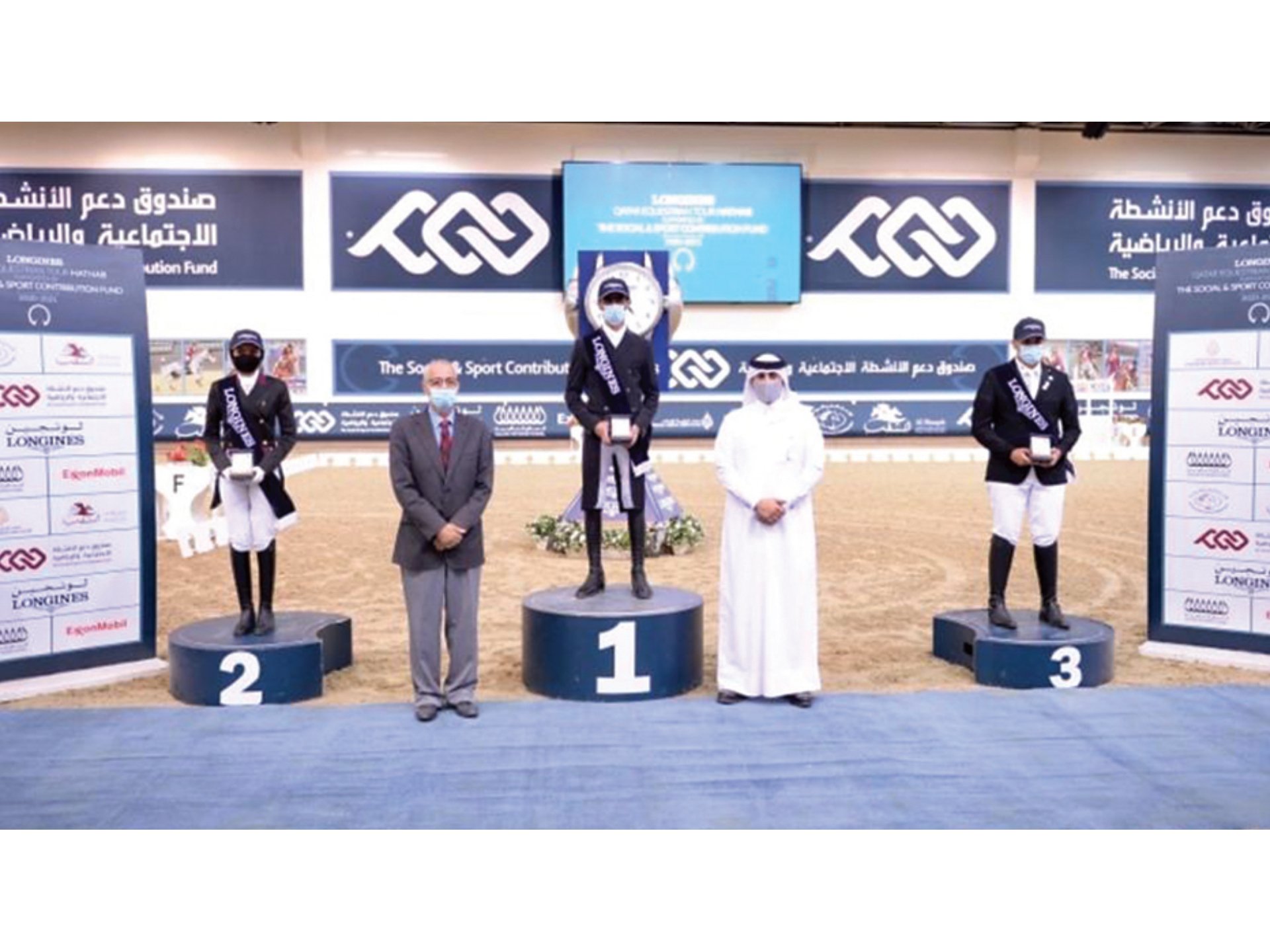 Doha, 27 December 2020 - Jassim Al Jaham Al Kuwari excelled to top in both Level 1 and Level 2 events of the third dressage competition of the fourth edition (2020-21) of Longines Hathab Qatar Equestrian Tour, organised by the Qatar Equestrian Federation in partnership with Al Shaqab, member Qatar Foundation, and supported by the Social and Sport Contribution Fund, which was held QEF’s indoor arena.
Al Kuwari first topped the Prelim (Level 2) Test 2C competition on his mount Sandro girl and later returned to the arena to steal show in the Medium (Level 1) | Test 1C event with Monopoly registering a score of 66.71.
Maryam Ahmed Al Semaitt on Rhythm (65.781) finished as the runner-up, while Saoud Ahmed Al Boinin on Drum Mousse (65.781) was third.
In Level 2, Asmaa Yasser Mohammed riding Quatro Junior (69.250) had to settle for the second spot, and Maryam Ahmed Al Semaitt on Special Edition 19 (66.250) third.
Longines Hathab is being held behind closed door with all precautionary health and safety measures against COVID-19 of the Ministry of Public Health.
Ali Al Rumaihi, Event Director of Longines Hathab, praised the performing levels of the riders in the dressage competition, which has attracted large participation.
He said, “While participation is open to all riders in dressage and riders are also allowed to take part in both showjumping and dressage, they must have a specific horse for each competition.”
He added: “Dressage includes the basics of equestrian education for young riders and there is a great development in the level of the championship year on year. Now, it is enjoying a large participation due to the nature of the competition.
“The Qatar Equestrian and Modern Pentathlon Federation is working hard to encourage the culture of the dressage riding by organising many tours, increasing the prize-money and providing the technical staff capable of training the riders.”
He also informed that trainer Michel Jerimes is working continuously to help riders prepare well with help of her long experience.
He revealed that one of the most important championships that will be held this year for dressage will be for the HH The Amir’s Sword in February 2021.
Meanwhile, Jassim Al Jaham Al Kuwari expressed delight on winning the two dressage events on Saturday. “It was tough since there was large participation and the competition was challenging,” he said.
“Dressage (an Olympic event) has been attracting a lot of young riders and the number has been increasing in each round of Longines Hathab,” he added.
He also explained that great attention is being given to the dressage competition which will definitely have a great impact on the development of Qatari riders and help in preparing them well for international events.
Results
Dressage | Medium (Level 1) | Test 1C | Prize-Money: QR15,000
1. Rider: Jassim Al Jaham Al Kuwari; Horse: Monopoly; Score: 66.71; Prize:QR4,950
2. Maryam Ahmed Al Semaitt; Rythm; 65.781; QR3,975
3. Saoud Ahmed Al Boinin; Drum Mousse; 65.781; QR2,700
Dressage | Prelim (Level 2) | Test 2C | Prize-Money: QR10,000
1. Jassim Al Jaham Al Kuwari; Sandro Girl; 69.750; QR2,500
2. Asmaa Yasser Mohammed; Quatro Junior; 69.250; QR2,000; 3. Maryam Ahmed Al Semaitt; Special Edition 19; 66.250; QR1,500.