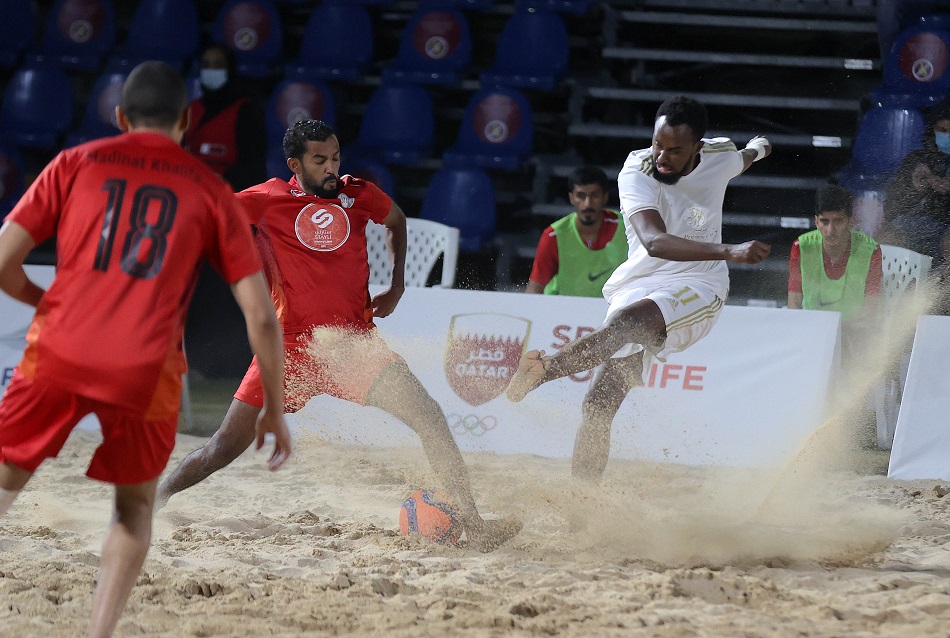 Doha, 29 December 2020 - After ten days of exhilarating action at the maiden QOC Beach Games, the men's beach football finalists emerged on Tuesday with Al Shahaniyah and Team Doha heading for the showdown on Saturday.

Al Shahaniyah ended Al Ennabi's fine run at the legacy tournament with a 3-1 victory in the first match of the day while Team Doha defeated Madinat Khalifa 4-2 in the other encounter.

Playing against a determined Al Ennabi side, Al Shahaniyah ensured their defence formation was highly effective in curtailing the rampaging attacks of the Al Ennabi lads who were the highest scoring side at the tournament having netted a total of 11 goals in their first two matches.

Al Ennabi had walloped Al Wukair 7-0 in their first match before trouncing Madinat Khalifa 4-1 to set up the last-four clash against Al Shahaniyah.

Unlike their previous encounters, however, the situation was different in the semis for the Al Ennabi team as it was Al Shahaniyah who powered to a 2-0 lead before the former got one back.

Just as Al Ennabi were attempting to stage a comeback in the second half, Al Shahaniyah pounced on an error from their opponents' defence to extend their lead with two minutes left in the game.

As much as Al Ennabi tried to close the deficit, a resolute Al Shahaniyah wall of defence was too much for them to penetrate with the goalkeeper standing like the rock of Gibraltar between the sticks - thwarting every goal attempt.

Meanwhile, in the second semis clash, Team Doha got the better of Madinat Khalifa with a 4-2 defeat to set up the final clash against Al Shahaniyah.

The Madinat Khalifa team were left to rue their several missed chances as the game would have ended differently were they more clinical in front of goal.

Sporting action continues on Wednesday in the men's event with the beach volleyball's semi-finals involving Al Adaam and Lusail, and Al Nojoom versus Zekreet on the card.

However, in beach handball, Al Fohoud will be up against Al Soqour while Al Nomour faces Al Khafji in the quarter-finals. The other two matches will be between Al Hazm versus Al Ruwais and Al Nosour against Al Said.

Over 500 male and female athletes are participating in the maiden QOC Beach Games, a legacy event of the 2019 ANOC World Beach Games Doha, which is being held over two weeks until January 2, 2021.