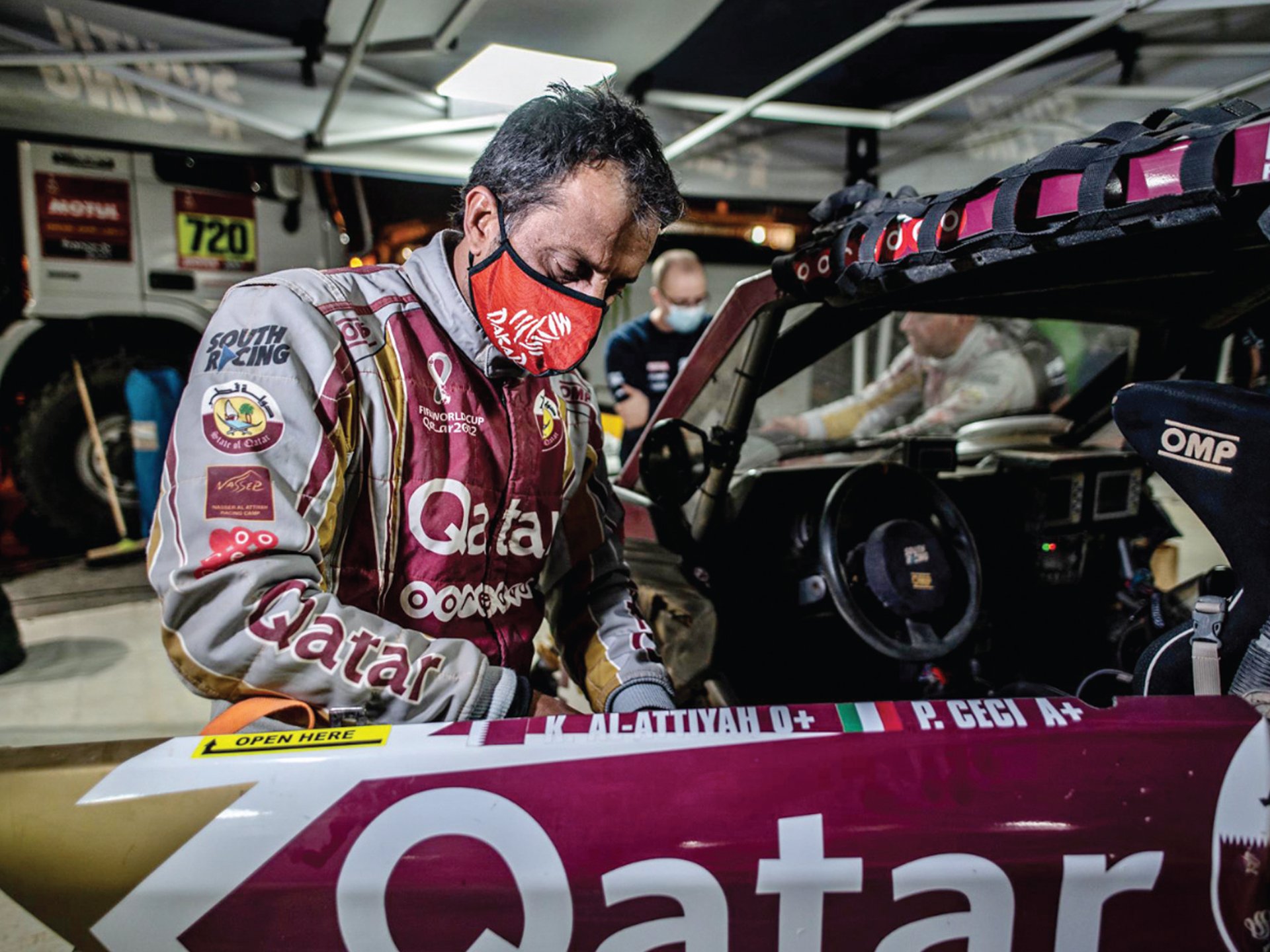 A further 26 vehicles have withdrawn from the race but remain eligible to continue the adventure under Dakar Experience rules without appearing in the general standings.

As different scenarios unfold, the titles at stake are still up for grabs in the five categories, but the current leaders have taken at least a few steps forward: car driver Stephane Peterhansel and Nasser Al Attiyah, biker Toby Price, quad rider Nicolas Cavigliasso, lightweight vehicle driver Aron Domzała and truck driver Dmitry Sotnikov have the advantage going into the second week.

The 23 vehicles in the Dakar Classic category overcame the challenges of the first week. Marc Douton and his Sunhill buggy lead the regularity race.

The men on the final podium of the 2020 Dakar lined up for the start of this year’s edition in Jeddah with the confidence that comes from being one of the big favourites.

Fast-forward one week and the protagonists are still the same, but the roles have changed. Struggling to adapt to what he calls “the new roadbook philosophy”, Carlos Sainz has made a series of navigation errors that have pushed him down to third place in the general standings, 40′39″ behind Stéphane Peterhansel.

The collector of Dakar records is well aware that victory is far from guaranteed on the rest day, not least because he is just 5′53″ ahead of a rival as fast and aggressive as Nasser Al Attiyah. The Qatari has been as unerring as ‘Peter’ throughout the opening week, claiming four victories (including the prologue) and ratcheting up the pressure on the overall leader. He has a knack for pushing his rivals until they crack.

Whatever the weather is like on the road to Neom and then Jeddah, expect the heat to rise in the competition stage after stage.

X-Raid and Toyota could only look on helplessly as Jakub Przygonski sank to fourth overall at 1 h 11 (although he remains in contention for a podium spot), Orlando Terranova threw in the towel in stage 5 due to an electrical problem, rising star Henk Lategan tumbled out of the Dakar after two stellar performances in a row, Yazeed Al Rajhi broke his gearbox and his heart in stage 3, and Bernhard ten Brinke also crashed out of the race.

Bahrain Raid Extreme is still banking on Nani Roma (fifth at 1 h 37) to catch up with the leading trio, but Sébastien Loeb is out of the running after making several blunders and breaking a wishbone, which meant an unscheduled night in the desert for the French driver and sent him plummeting to 45th place overall, 11 h 34 behind his old stablemate at Peugeot. Mathieu Serradori has a similar tale to tell after slipping down to 50th place despite a string of provisional podium finishes, while his equally ambitious teammate Yasir Seaidan languishes in 38th place. Not everyone can go the distance.

A dozen riders are still in with a shot as the race heads into its decisive second week. A mere quarter of an hour separates the top 10 halfway through the rally.

Defending champion Ricky Brabec is thirteenth overall, but only 19 minutes down on the leader, which makes the Honda rider still a force to be reckoned with in the final week. Brabec made a series of navigation errors in the first few stages after claiming the prologue, but the American has remained in contact with the leading group without pushing his Honda too hard or burning through the six rear tyres allocated to each elite biker for the entire race.

The 2016 and 2019 champion, Toby Price, is in control of the general standings. The KTM rider stayed as cool as a cucumber throughout a series of specials in which navigation turned up the heat on the competitors.

Honda has placed two riders, Kevin Benavides and “Nacho Cornejo”, right behind the Australian and in perfect position to pounce on any mistake the leader may make at 2′16″ and 2′57″ back, respectively.

The Argentinian put in a heroic performance in stage 5 from Riyadh to Al Qaisumah, soldiering on to victory despite crashing and hurting his nose and an ankle after cresting a dune. Meanwhile, the Chilean has found his rhythm after a cautious start to the rally and is now racking up one top placing after another.