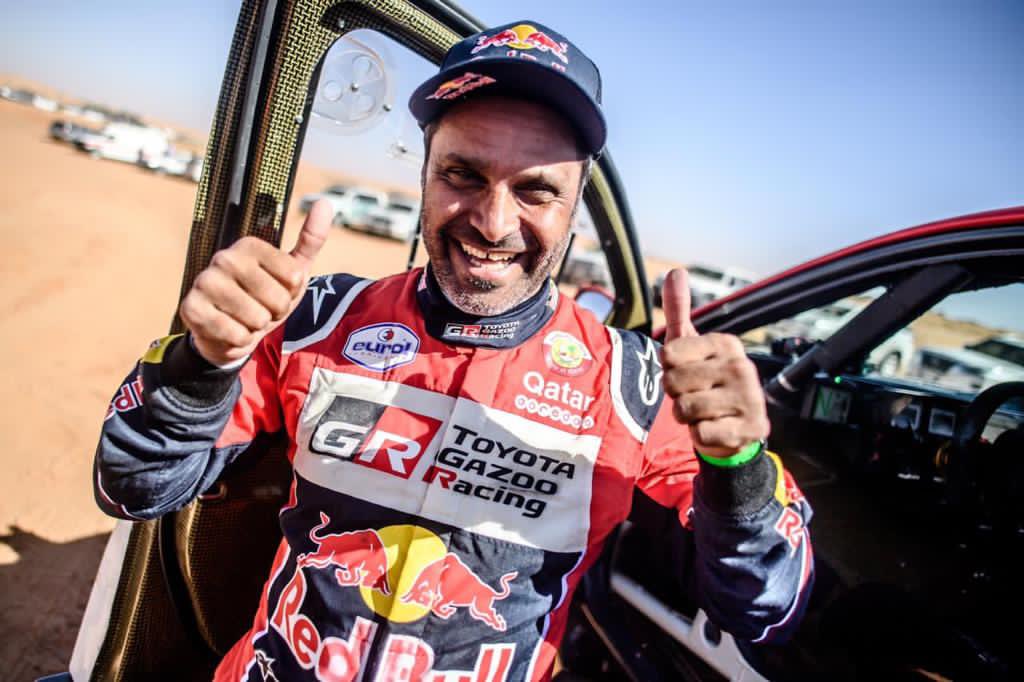 Riyadh, 13 January 2021 - Frenchman Stephane Peterhansel won Stage 9 (Neom-to-Neom) of the Dakar Rally on Tuesday while increasing the lead on Qatar’s Nasser Al Attiyah.
The ‘Mr. Consistent’ and 13-time Dakar winner Peterhansel had been leading the overall rankings since Stage 2, but he had yet to win a stage in the 2021 Dakar edition. He managed that as he beat Attiyah to the line by 12 minutes.
Contrastingly, it took three tire punctures to slow Attiyah. Disappointed yet not disheartened, the three-time champion Attiyah said, “Still, everything is possible”, with three stages to go.
“The navigation was no problem, but we had three flat tires, three punctures and we didn’t have any spare wheels, so we decided to just to get to the finish and Stephane passed us,” explained Attiyah.
“It was not easy for us today. But what can we do? We can’t change anything with the tires. That’s life, I’m not disappointed. What can I do? I have done my best and I’m here at the finishing line. Still, everything is possible,” he stressed.
Spaniard Carlos Sainz ended a distant third overall with a deficit of 1 hour, 2 minutes, and 25 seconds. He finished 12th in Stage 9 and lost 22 minutes, 30 seconds.
Peterhansel and his co-driver Edouard Boulanger (both FRA) not only took the stage win on leg nine, around the city of Neom, but the MINI JCW Buggy crew also managed to extend the lead.
They are now ahead of second-placed Attiyah by almost 18 minutes.
Sainz and Lucas Cruz (both ESP) finished twelfth in the MINI JCW Buggy after suffering technical issues. Vladimir Vasilyev (RUS) and Dmitry Tsyro (UKR) ended the stage in 15th place in the MINI JCW Rally.
In what was a scenic rally by the Red Sea, Peterhansel and Boulanger seemed unbeatable. Although they had to open the route again over the course of the stage, the opposition was unable to catch them. Unlike many other competitors, they returned puncture-free on a stage that was again very stony in places.
“That was a real Dakar stage: difficult navigation, challenging dunes – not only a question of speed, but also strategy. We knew it was going to be a long day, which is why we did not go flat-out, but rather tried to manage the tyres. In the end, we were able to overtake Carlos and Nasser,” said Peterhansel.
Sainz said: “This leg was even tougher for me than it was for the others. We had problems with the brakes. We tried to repair them, but had no brake fluid. So we could only finish the stage with a clear loss of time.”
Toby Price crashes out,
air lifted
In the bike category, Toby Price crashed hard 150 kilometers into Stage 9 and had to be airlifted to a local hospital.
The crash and retirement comes one day after his dramatic finish to Stage 8, which saw him limp home in second with a severely gashed tire that was held together by duct tape and zip lines.
The second-place finish on Monday put Price on course early. He was gaining on leader Nacho Cornejo and running third at the most recent check point before his crash.
Ricky Brabec and Sam Sunderland both stopped to render assistance. Brabec gave up 22 minutes with the charitable act. Sunderland lost 16 minutes.
Price was conscious as he was airlifted to the Tabuk hospital for x-rays of an injured left arm and shoulder, according to officials.
Brabec was originally credited with ninth in the stage, but after the lost time was credited, he climbed to second behind Kevin Benavides.
Florimo finished third, with Sunderland elevated to fourth after his time was also corrected.
Dakar Rally 2021 is now at is business end with three legs remaining. On Wednesday, the action will move to Al Ula. The 342-kilometre stage will mostly take place on sandy routes.
Overall standings after SS9
Car: 1. S. Peterhansel (FRA) / E. Boulanger (FRA) – MINI JCW Buggy – 34h 26m 16s; 2. N. Al Attiyah (QAT) / M. Baumel (FRA) – Toyota – 34h 44m 06s; 3. C. Sainz /ESP) / L. Cruz (ESP) - MINI JCW Buggy – 35h 28m 41s; 4. J. Przygonski (POL) / T. Gottschalk (GER) – Toyota – 36h 42m 46s; 5. N. Roma (ESP) / A. Winocq (FRA) – Prodrive BRX Hunter – 37h 08m 54s.
Bike: 1. Kevin Benavides 04:49:15s (Monster Energy Honda Team 2021); 2. Ricky Brabec 04:50:33s (Monster Energy Honda Team 2021); 3. Jose Ignacio Cornejo Florimo 04:50:49s (Monster Energy Honda Team 2021).