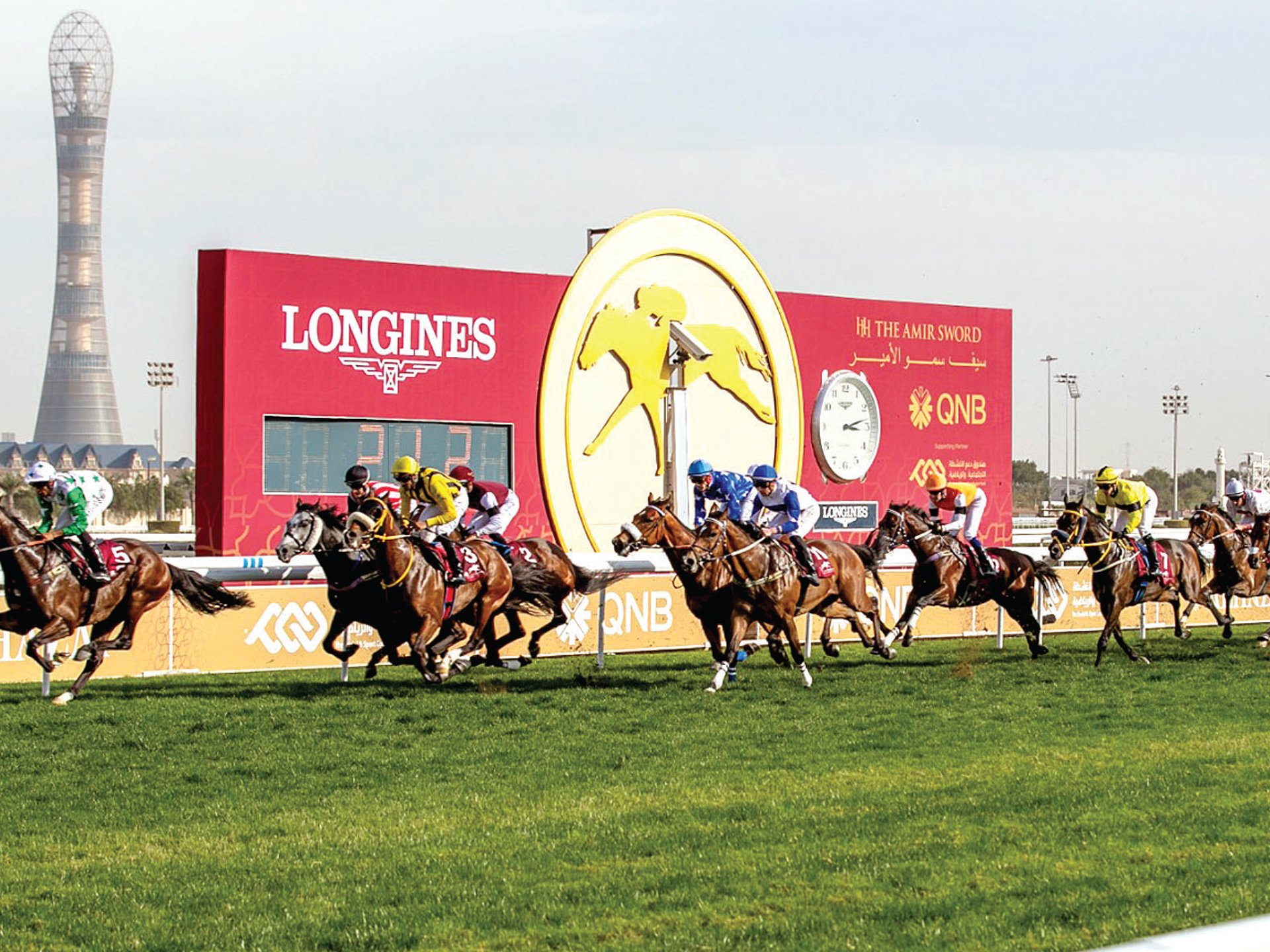 Doha, 26 January 2021 - Quality abounds among a massive 306-horse entry for the six international races at the biggest event on the Qatari racing calendar, the US$4.34 million (£3.26 million) HH The Amir Sword Festival which will be held at Al Rayyan Racecourse from Thursday (February 18) to Saturday (Feb 20).
The Festival’s two centrepieces are a pair of US$1 million races, the 58-entry HH The Amir Trophy (Presented by Longines), for thoroughbreds, and the 48-entry HH The Amir Sword (Sponsored by Al Hazm) for purebred Arabians. Both will be run over a mile and a half (2400m) on Saturday, February 20th.
The Group 1 winners Aspetar and Lord Glitters, together with Berkshire Rocco, beaten just a neck when runner-up in the Group 1 St Leger last September, spearhead an eight-strong British entry for HH The Amir Trophy, while another top level scorer, Intellogent, features among five French-trained hopefuls alongside Royal Julius, runner-up in this race two years ago.
Two of the very best purebred Arabians in the world, Ebraz and Tayf, trained in Qatar by Julian Smart and Alban de Mieulle respectively, are set to renew their heated rivalry in HH The Amir Sword.
Both are sons of the legendary stallion, Amer, and Ebraz has landed the last two renewals of this prestigious event, getting the better of Tayf on both occasions. But Tayf gained revenge in October when beating Ebraz into third place in the Group 1 Qatar Arabian World Cup at ParisLongchamp.
This mouth-watering contest is likely to be much more than a two-horse race as there are a number of other top class entries, most notably Lady Princess, trained on the Atlantic coast of France by Thomas Fourcy. She boasts a fantastic record of six victories and two second places from eight career starts and last month scored a decisive victory in the Group 2 Qatar Derby.
Saturday, February 20th’s card features three further international races, each worth US$250,000 (£187,870). They are a pair of thoroughbred events - the 38-entry Dukhan Sprint (Sponsored by Breeders’ Cup) over six furlongs (1200m) for three-year-olds and up, and the 45-entry Al Biddah Mile, over one mile (1600m) for three-year-olds only – plus the Qatar International Cup, for four-year-old and older purebred Arabians, also over a mile (1600m), which has attracted 58 entries.
The Dukhan Sprint is set to be a fierce battle between some of the top sprinters from Qatar, Britain and France. The home side is led by X Force, winner of five of his nine starts since arriving in the Gulf 14 months ago, while the seven British entries include the Stewards Cup hero, Summerghand, while the Group 3 winner, Air de Valse, is part of a six-strong French contingent.
Last month’s Al Rayyan Stakes, over seven furlongs of this track, may prove the key to the Al Biddah Mile as the first 12 home, including its runaway Mohammed Afroz-trained winner, Soldierpoy, are all entered. However, Homeryan, trained in France by Francis Graffard, has posted some very strong efforts in his homeland, not least a close second in the Group 3 Prix Thomas Bryon, and could make a successful Doha debut.
Methgal is set to defend his title in the Qatar International Cup where he could have most to fear from the 2019 runner-up, Al Naama, who was a disappointing sixth 12 months ago but has bounced back to form with two recent wins.
The sixth international race, the US$200,000 (£150,376) Irish Thoroughbred Marketing Cup, takes place 24 hours before the other five on Friday February 19th. This one mile (1600m) event for four-year-old and up thoroughbreds is set to be the Festival’s most cosmopolitan event as its 59 entries hail from seven different countries.
The hugely consistent Pazeer, a regular in some of the top Al Rayyan races over the past four years and not out of the first two in his last six starts, would be a popular local winner while the international challenge features three inmates of the County Dublin yard of Irish trainer, Ado McGuinness, most notably the recent Listed scorer, Saltonstall.
In total, the six races have attracted 75 entries from overseas: 29 from Britain, 23 from France, 15 from Oman, three from Ireland, two from Bahrain, and one each from Spain, the Kingdom of Saudi Arabia and the United Arab Emirates.