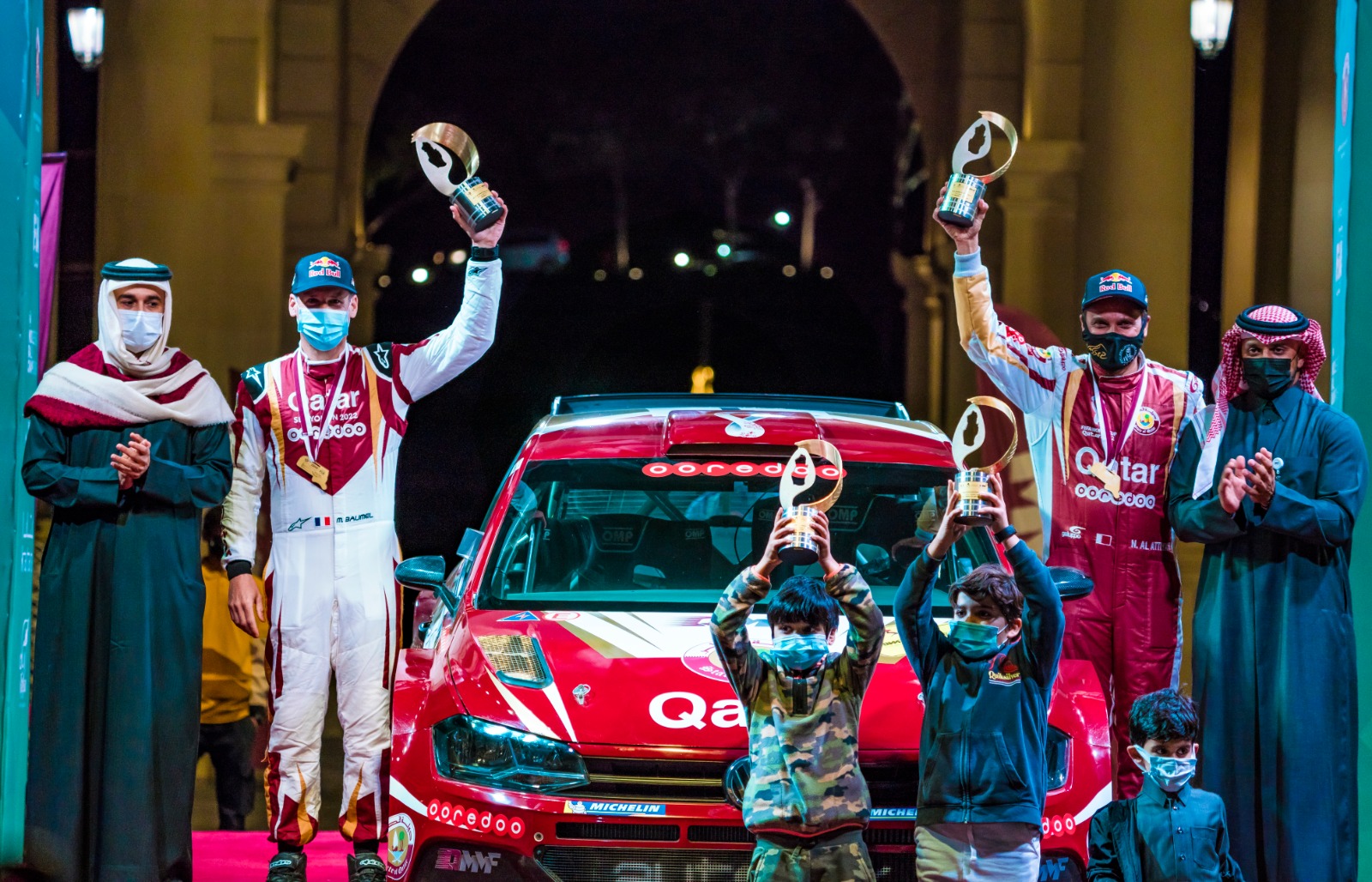 The Qatari and French co-driver Matthieu Baumel managed the pace perfectly over the closing stages and guided their Autotek Motorsport Volkswagen Polo GTi R5 to a winning margin of 1min 48.4sec over Abdulaziz Al-Kuwari and his new Irish co-driver James Fulton.

Baumel earned his 26th regional rally victory on the 41st running of the Qatar event to overhaul both Chris Patterson and Giovanni Bernacchini in the Hall of Fame.

He now has his sights set on Ronan Morgan’s record of 41 successes.

“Today we did a really good job,” said Al Attiyah. “Leg one was a nice fight between me and Kris Meeke. It was (becoming) a nice race but when Kris get out from the race it was an easy day for us today. It was great to have some high level in the Qatar Rally. If you look this year we had seven R5s. It was an amazing race. Thanks to the QMMF. I hope to continue in this level for this championship and this year.”

Al-Kuwari won three of the second’s day’s six special stages in his Tok Sport Škoda Fabia R5 and was pleased with the runner-up spot after infrequent rally appearances in recent seasons. Khalid Al-Suwaidi and his navigator Hugo Maghalães rounded off the podium places to make it a Qatari driver 1-2-3.

Any hope of seeing Al-Attiyah and visiting WRC star Kris Meeke battling for stage wins on the final day fizzled out when the Ulsterman was unable to restart after the team discovered engine damage on his SRT Škoda Fabia R5 that was sustained on stage five.

“Unfortunately no day two for us,” said Meeke. “On the last stage on Saturday, quite close to the finish, there were some waves (bumps) and I was on a similar line to my first pass in the morning. But the car skipped and landed nose on the next dip. This damaged the front bumper and took the water pipe off the radiator. That put an end to our rally.”

Nasser Khalifa Al Atya and Lebanese co-pilot Georges Nader gave the host nation a another driver inside the top four and Kuwait’s Meshari Al-Thefiri began the defence of his MERC 2 title in impressive fashion by winning the showroom category and finishing fifth overall in his Mitsubishi Lancer Evolution X.

FIA T4 cars are permitted in gravel rounds of the series this season and Saudi Arabia’s Saleh Al-Saif showed that the Can-Am Maverick X3 is a competitive package, setting a fifth fastest stage time on the way to a superb sixth place.

Qatar’s Rashid Al-Mohannadi and Oman’s Zakariya Al-Aufi reached the finish in seventh and eighth and Lebanon’s Ahmad Khaled was ninth.

Rally first timer Sheikh Suhaim Al-Thani retired his R5 Škoda before the last stage and missed out on a potential top 10 finish.

Oman’s Zakariya Al-Amri duly rounded off the top 10 and Lebanon’s Henry Kahy clinched maximum points in the MERC 3 category for two-wheel drive vehicles after another measured drive in his Škoda Fabia 1.6 to take 11th place. 11 of the original 17 starters completed the rally.

A furious three-way battle waged for outright success in the Qatar National Rally between Ahmed and Khalid Al-Mohannadi and Ahmed Allouh.

They each won a stage on the morning loop but time delays cost Allouh his chance later on and Khalid Al Mohannadi secured the win by the margin of 8min 32.7sec after problems for his rivals.

Lebanon’s Jad Al-Aawar retired before the end of the morning’s loop.

Action resumes in the FIA Middle East Rally Championship with the Oman International Rally at the end of February.