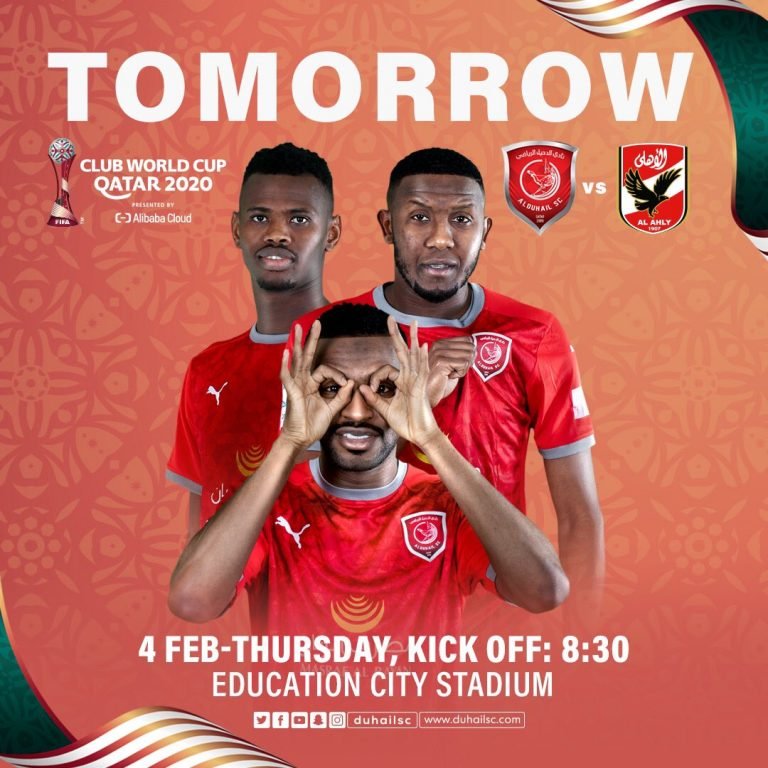 Doha, 3 February 2021 - Reigning QNB Stars League champions Al Duhail face a strong test in the form of African champions Al Ahly of Egypt, as the FIFA Club World Cup Qatar 2020 kicks off on Thursday. The annual competition, which was delayed by two months due to Covid-19 pandemic, will conclude on 11th February.

This is the second time Qatar is hosting the tournament, after 2019. It was scheduled to start on 1st February when Al Duhail were to play Oceania representative Auckland City FC, but the latter withdrew from the competition because of Covid-19 quarantine measures required by authorities in New Zealand. As a result, The Red Knights received a walkover into the second round with a 3-0 verdict.

Al Duhail are making their debut in the competition. Their game against Al Ahly is scheduled to kick off at 20:30 at the Education City Stadium on Thursday, 4th February. The winners will face Bayern Munich in the semifinal.

Al Duhail coach Sabri Lamouchi and a number of players spoke ahead of their match against Al Ahly.

Lamouchi said, “Our preparations are normal. Facing Al Ahly won’t be easy. We consider it as an honour to participate in this wonderful tournament. We’ll have to take advantage of all our opportunities. For that, our ranks must be complete without any injuries. Al Ahly have experience in big tournaments, be it the Champions League or Club World Cup. On our side, we must believe in ourselves and stay focused.”

Al Duhail player Ismail Mohammed said, “The participation in the tournament is an honour for us and we’ll do our best to progress. The team is moving in the right direction even though we didn’t have luck on our side in many matches, but that does not mean we’re found wanting. I hope everyone will be in their best condition, physically, technically and psychologically.”

Al Duhail captain Almoez Ali said, “We’re ready to compete. Certainly, everyone is eager to take the field, especially since we’re facing Egyptian club Al Ahly, who’re champions of Africa. The fact that we’re making our debut in this tournament gives us the motivation to present ourselves in the best way. All participating clubs will be at a high level, so we must also be at the same level. Against Al Ahly, we’ll do our best to win and reach the semifinals.”

Al Duhail’s new striker Michael Olunga said, “Al Duhail are a special team and one of the biggest clubs in Qatar, and it’s wonderful being here. The Club World Cup is a good opportunity for me and my team-mates. It’s a challenge for everyone and we’re ready for it. We know the strengths of Al Ahly, they’re one of the strongest teams in Africa. We’ve to work hard, as the match won’t be easy.”

Al Duhail defender Bassam Al Rawi said, “Participation means a lot to us because we’re representing the State of Qatar and donning the logo of Al Duhail club in a global championship, and we’ve to present a good level and appear in an excellent way. We are fully ready for the tournament and all players are excited since it’s a big opportunity. We must play to our full potential.”