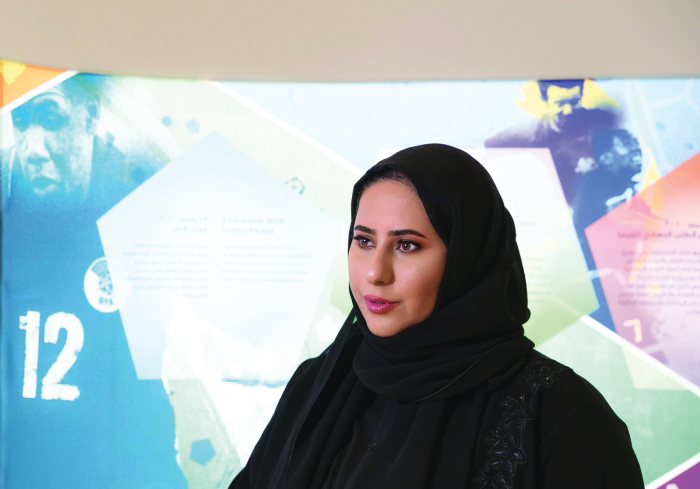 Doha, 10 February 2021 - Supreme Committee Communications Director and Communications Head at the Local Organizing Committee of the ongoing FIFA Club World Cup Qatar 2020, Fatma Al Nuaimi, has termed the organizational success of the tournament so far under various challenges due to the current coronavirus (COVID-19) pandemic as an extremely beneficial experience and an exceptional opportunity to benefit and develop expertise as the World Cup 2022 draws closer and will be held in less than two years from now.
In an exclusive interview with Qatar News Agency (QNA), Al Nuaimi said that the FIFA Club World Cup is a pilot tournament for the State of Qatar and its main objective is to improve the preparations and various operational plans before hosting the first edition of the World Cup in the Middle East and the Arab world, which is what was achieved during this year’s edition that tested two new World Cup stadiums, namely Ahmad Bin Ali and Education City.
Every tournament or event hosted by Doha during the coming period provides us with the opportunity to benefit and develop our expertise in light of getting closer to organizing the World Cup 2022, she said, stressing that they continued to work closely with all partners to achieve success and provide a wonderful and exceptional experience to the fans, players and administrators during the tournament.
Al Nuaimi also confirmed that Qatar has achieved great success in its pivotal role in hosting a series of local, regional and international events during the year 2020 despite the Covid-19 pandemic crisis, thus achieving the leadership position on the global sports map by establishing new standards in maintaining the health and safety of all participants.
Al Nuaimi said that statistics showed impressive achievements after the success of hosting the AFC Champions League competitions for the east and west zones, and specifically the final of the tournament, which was attended by 10,000 fans, followed by the distinguished organization of HH the Amir Cup with the presence of 50 percent of the stadium’s capacity, saying that nearly 900 players and technical teams from 30 teams participated in the AFC Champions League competitions alone, and 76 matches played at a number of World Cup Qatar 2022 stadiums, during which the largest safe space of its kind - known as the “medical bubble” - was set up since the outbreak of the pandemic.
Qatar is preparing – in less than two years – to host the World Cup 2022. It aims to test the readiness of the various stadiums and facilities of the tournament by hosting a number of major sporting events and to enhance the provision of a distinctive experience for fans and visitors to Qatar during the World Cup.
The Director of Communication at the Local Organizing Committee for the Club World Cup stressed that organizing the tournament under the repercussions of coronavirus allowed them to gain more experience, as the organizers took advantage of this new phenomenon for the global community to test their abilities to deal with such situations and emergency matters in the future.
She said that Qatar is the only country that recently hosted continental and global sporting events, with large participation in light of the current crisis, after implementing health procedures and measures in coordination with the Ministry of Health.
Al Nuaimi pointed out that the challenges that have faced the preparations for the World Cup 2022 since the outbreak of the coronavirus crisis led, in one way or another, to a slowdown in the workflow at the beginning of the pandemic, but after taking precautions and health measures in coordination with the Ministry of Public Health and the Workers’ Welfare team in the Supreme Committee, a mechanism was reached that significantly preserved the safety of workers, while ensuring the pace of work within the planned timetable for completion of all projects, thanks to the emergency plans for the World Cup projects that have proven their worth.
She noted the distinctive role that sport can play in mitigating the psychological effects of the outbreak of the Coronavirus, which guarantees the improvement of public health, the preservation of society and its safety, as well as ensuring a bright future for future generations.
Al Nuaimi continued by saying that the impact of sport is great in bringing together people from all over the world and sympathsizing and understanding each other, saying that this matter is the main pillars and main goals for which Qatar sought to organize the World Cup in Qatar, as it aims through the tournament to highlight that Qatar and the Arabs love football, to give visitors an opportunity to explore a new culture, and to correct misconceptions about the Arab region.
She said the Qatar World Cup is getting more and more important day by day in view of the various challenges and the current crisis, as it will be one of the largest global gatherings in the post-coronavirus crisis, and this will undoubtedly be accompanied by challenges, but it will give us at the same an important opportunity to unite the world through a shared passion for football.