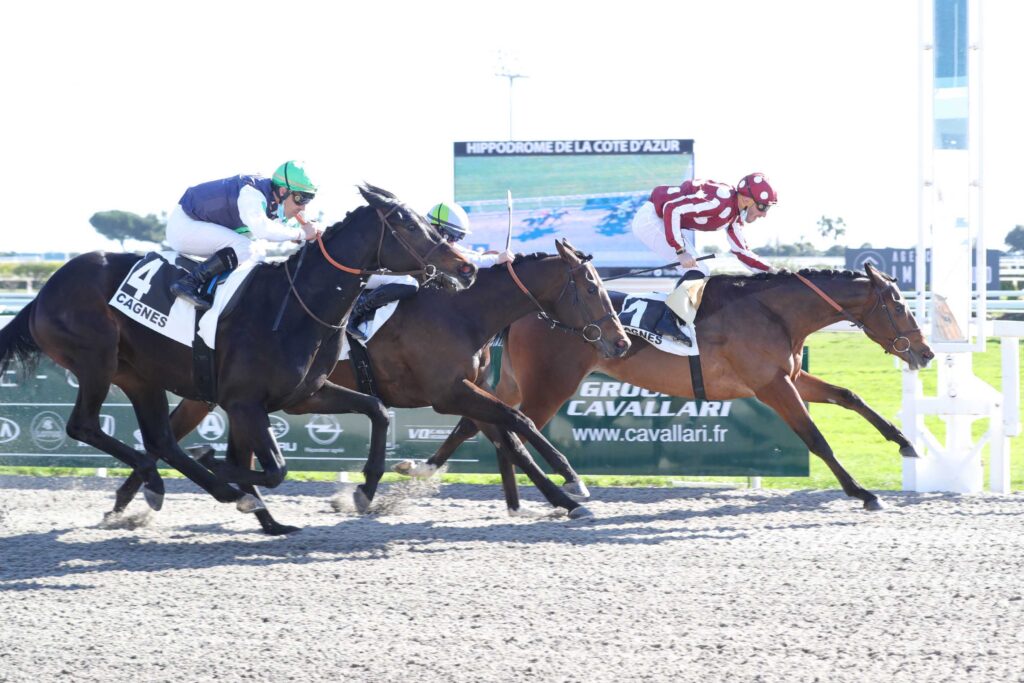 Paris, 16 February 2021 - In the colours of His Highness Sheikh Abdullah bin Khalifa al-Thani, King Shalaa went from pillar to post to lift the Listed Prix Californie, the feature race in the card at Cagnes-sur-Mer on Sunday. Ridden by champion jockey Pierre-Charles Boudot and trained by his breeder Francois Rohaut, the three-year-old colt is now three wins from as many starts and looks to be an exciting prospect for 2021.
King Shalaa debuted with a win in August as a two-year-old, when he stormed home at La Teste. He followed up quickly with another success assuring his quality at Lyon Parilly in September, his last appearance on a racecourse. This was his first attempt at Stakes level, and once again he put up a faultless performance.
Drawn in stall 1 in this mile race on the all-weather track, King Shalaa was quickly taken up to the lead by Boudot and from there he controlled the race throughout. He was tracked by Fort Payne, who sat on his flanks under jockey Thomas Trullier. Unfazed, King Shalaa and Boudot travelled at their pace on the rail and once in the straight, the colt progressively picked up, coming under pressure from Fort Payne with 300m left to run. King Shalaa held him at bay in the closing stages to win by half-a-length, with a fast-finishing Summiter just missing out on second place by a head.
Rohaut said: “This Listed wasn’t originally on the programme as he was supposed to go to Qatar to run in a local Group 3 for three-year-olds over 1,600m next week. But with the current situation being what it is, we preferred not to take the risk. We aimed him to this race as he was fit and ready to run. He was a little fresh in the preliminaries, but the race went very well. He was able to control the race from in front, steady the pace, and accelerate progressively in the straight: everything that we wanted for him today. He is a good horse who will improve with experience and racing. We will see where he goes to. Like all the family, he doesn’t like soft ground hence why we chose this race. We hope that he will make up into a Group horse; for the moment, you can’t fault him. He has beaten everything that he has come up against and he does it well each time. We haven’t decided on the next race as of yet.”
King Shalaa was bred by Rohaut, and is from the first crop by Al Shaqab Racing sire Shalaa, who stands at Haras du Bouquetot in Normandy, France. His dam Baki won two races in Vichy over 2,000m and in Deauville over 2,500m. Besides King Shalaa, she is also the dam of Waltham, winner of three races including the Prix Maurice Caillault (L).