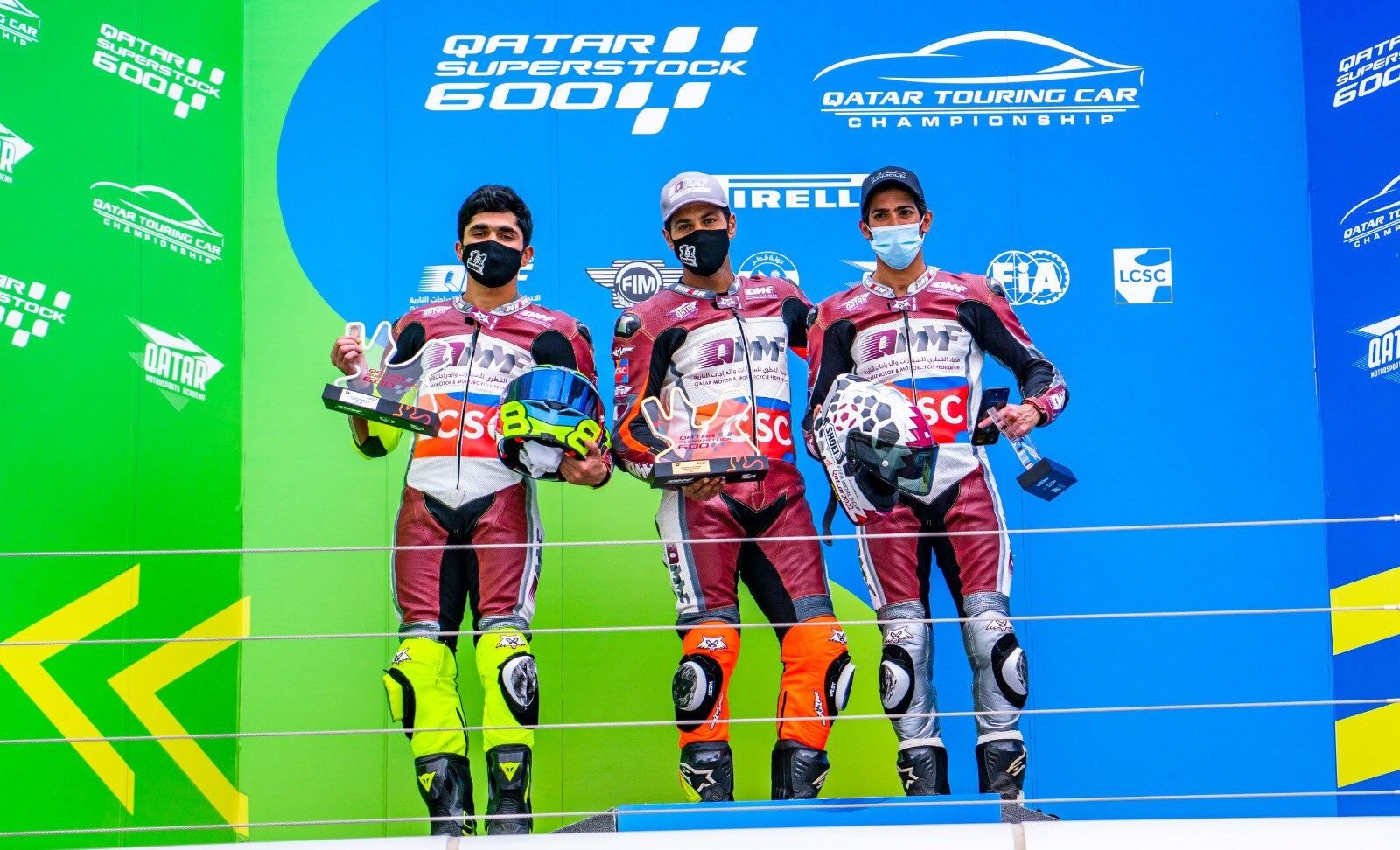 Doha, 21 February 2021 - The veteran Saeed al-Sulaiti used all his experience to narrowly beat Abdullah al-Qubaisi and win Race 1 of the second round in the Qatar Superstock 600 at the Losail International Circuit on Saturday.
Al-Sulaiti, who had won the opening two races of the season, made it three-in-a-row with another brilliant show. The 35-year-old covered the 12-lap race of 64.6 km in a time of 25 minutes 12.849 seconds, a mere 0.100 seconds ahead of his closest competitor and defending champion al-Qubaisi. Meshaal al-Nuaimi finished third in 25:43.119.

l-Sulaiti's hopes of continuing his dominating form were disappointed after the second race was postponed due to rain and extreme wind at the Losail International Circuit. The organising committee of the championship has now decided to hold the race during the third round of the championship.

After three races, al-Sulaiti leads the championship table with a perfect 75 points, 15 ahead of al-Qubaisi, while al-Nuaimi has 48 points.

In the Trophy class category, rookie Youssef al-Darwish took the top honours. The youngster clocked 25:47.350, to comfortably finish ahead of compatriot Sheikh Khaled al-Thani, who timed 26:37.337. Canadian Stephen Turnbull finished third in a time of 26:53.447.

Meanwhile, Khaled al-Rumaihi, Vice President of the Losail Circuit Sports Club (LCSC) was pleased with the performance of the riders in the second round, despite difficult weather conditions at the weekend.

"The youngsters are very keen to participate in the championship, which has led to an increase in the number of contestants. The level of the competition has improved significantly despite the difficult weather conditions during the weekend,” he said.

"Certainly, strong winds do not help riders, but at the same time they gain more experience that will undoubtedly benefit them in the future, especially since every race has its different circumstances and challenges. It is better for our young riders to face all circumstances so that they are ready for any scenario,” al-Rumaihi.

On the success of the championship despite the prevailing pandemic, the LCSC official said: “The success is due to the concerted efforts of state institutions, which have put precautionary measures in place, to which we are fully committed. It is well-known that Qatar organises events in the most difficult circumstances.”

Regarding competition in QSTK, he said: “The competition is very good, although Saeed al-Sulaiti has won three consecutive races thanks to his experience, which had a major role in his superiority over Abdullah al-Qubaisi. However, al-Qubaisi has a natural talent but he does not have the experience of al-Sulaiti. There is also Youssef al-Darwish, who has a good future, especially as he is a fast rider and has high potential.”