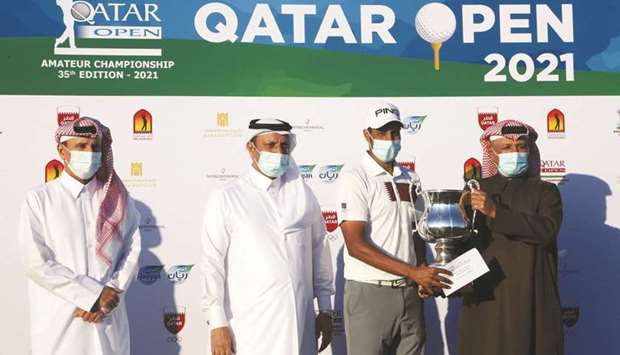 Doha, 28 February 2021 - Ali al-Shahrani became only the second Qatari golfer to win the Qatar Open Amateur Championship in its 35-year history yesterday.
At the Doha Golf Club, al-Shahrani kept the momentum going in the third round as he carded a score of 3-over to clinch the title.
The first Qatari to win the championship was Abdullah al-Bouanain, who had won the inaugural title 35 years back on sand.
Al-Shahrani was understandably pleased with his performance and the victory.
“I am dedicating my win to the QGA (Qatar Golf Association) and as they’ve always been a source of encouragement and support. I’m very happy that I’m the first Qatari to win the Qatar Open (in 34 years),” al-Shahrani said.
Compatriot Saleh al-Kaabi tried to keep the pressure on al-Shahrani in the final round, but only managed to finish six strokes behind him at nine-over overall. Day 1 leader Ruan Jordaan carded a par in the third round to also finish with nine-over.
In fourth place was Jaham al-Kuwari who carded 17-over after the three rounds. Mike Elliott too finished with the same score.
“It wasn’t an easy competition. We played in very tough windy conditions. In the final round, I was under a lot of pressure from my national team member and my friend Saleh al-Kaabi, but thankfully I managed to win the title,” he said.
With the win, al-Shahrani got a direct entry to the European Tour’s Qatar Masters.
QGA Secretary General Fahad al-Naimi lauded al-Shahrani for triumph. “Qatar’s Abdullah al-Bouanain won the inaugural edition in 1983, but that was on a sand course. After over 35 years, we’ve another Qatari golfer winning the tournament. It’s a superb achievement and we are proud of him. Ali is among our top players and I hope he will keep growing and will do well for Qatar,” he said.
“Jaham al-Kuwari is our wild card for Qatar Masters, and we will decide on the second wild-card in the next couple of days,” said al-Naimi.