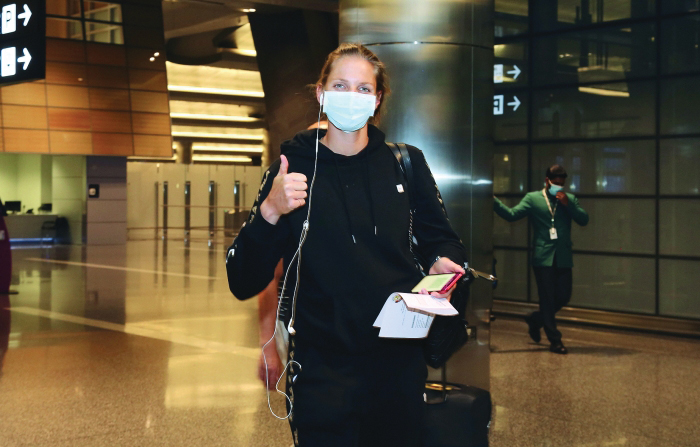 Doha, 28 February 2021 - The draw for Qatar Total Open 2021, held virtually on Saturday, threw up exciting contests with a likely early meeting between defending champion Aryna Sabalenka of Belarus and Garbine Muguruza of Spain.
The main draw begins Monday, March 1 at the Khalifa International Tennis & Squash Complex till March 6.
The world number eight Sabalenka, seeded third, has a bye and will meet the winner of Muguruza and Russian Veronika Kudermetova’s opening round.
The 32-player list of the $565,530 prize-money WTA500 tournament which inlcudes four of the World’s top-ten players led by 2019 Wimbledon Open semi-finalist the World No. 5 Elina Svitolina of Ukraine.
Others on the cards for the 19th edition of the annual tournament are 2018 champion Petra Kvitova, 2017 champion Karolina Pliskova, three-time Grand Slam champions Angelique Kerber of Germany, Belorusian Victoria Azarenka – twice winner in 2011 and 2012 and former world No. 1, and Kiki Bertens – the 2016 French Open semi-finalist.
The 22-year-old Sabalenka, who arrived in Doha on Friday, had clinched the Falcon Trophy in 2020 defeating the two-time Grand Slam champion Kvitova in the final.
She had raced past the world No.11 from the Czech Republic in straight sets to claim her sixth career title and the first to be won by her at any tournament outside of China.
This time though she’s arrived having won the Australian Open doubles crown playing alongside Elise Mertens of Belgium.
Last month, she also won her third straight tour title and 15th consecutive match beating Kudermetova 6-2, 6-2 in the Abu Dhabi Open final. She also won indoor tournaments in Ostrava and Linz at the end of last season.
“I’m happy to be here once again, and I look forward to a wonderful tournament. It’s always been a pleasure coming to Doha,” the Belarusian said on being in Qatar.
Meanwhile, Svitolina, a former semi-finalist and always a fierce competitor in ‘windy’ Doha would be looking for a good start. The top seed has a bye and will await the winner of Saisai Zheng (CHN) and Amanda Anisimova (USA) clash.
Fourth seed Kvitova will await the winner of the match between fifth-placed Kiki Bertens of the Netherlands and 2016 finalist Jelena Ostapenko of Latvia.
Local favourite Ons Jabeur of Tunisa, who will be back at the Khalifa Complex after becoming the first Arab woman to reach the quarter-finals of a Grand Slam at the French Open in 2020.
The 26-year-old Jabeur, who now is world ranked 31, is likely to play Czech Pliskova in the second round.
Speaking via video conference on Saturday, she said, “Doha is a special venue for me. This tournament gives me extra motivation because I have lot of good memories here.
“I am practising here and It feels great,” the Tunisian – one the players affected by Australian Open lockdown, said.
Kerber will take on Turkey’s Cagla Buyukakcay in the opening round while seventh seeded Jennifer Brady of USA will play Anett Kontaveit of Estonia.
Sixth seed Belinda Bencic of Switzerland was drawn to meet Madison keys of US in the first round while Greek Maria Sakkari will face the fast-rising Egyptian Mayar Sherif.
Tournament Director Saad Al Mohannadi welcomed the defending champion and tennis fraternity for Qatar Total Open 2021. “We are glad to have the defending champion Aryna Sabalenka joining us at this year’s tournament again. We are happy to welcome her to Doha – the home of tennis and great hospitality. We have no doubt she, and all the other players, will have a wonderful stay and enjoy themselves as they compete in this week of exciting tennis said,” he said.
About the health measures put in place creasting a secure ‘bio bubble’, he said, “The health and safety of all participants are our top priorities at the Qatar Total Open, and we are not leaving any stone unturned in ensuring that. This year’s draw ceremony was different from the previous for obvious reasons, but the glamour and glitz associated with it remain the same despite that.”
Seedings: 1. Elina Svitolina (UKR), 2. Karolina Pliskova (CZE), 3. Aryna Sabalenka (BLR), 4. Petra Kvitova (CZE), 5. Kiki Bertens (NED), 6. Belinda Bencic (SUI), 7. Jennifer Brady (USA), 8. Victoria Azarenka (BLR).