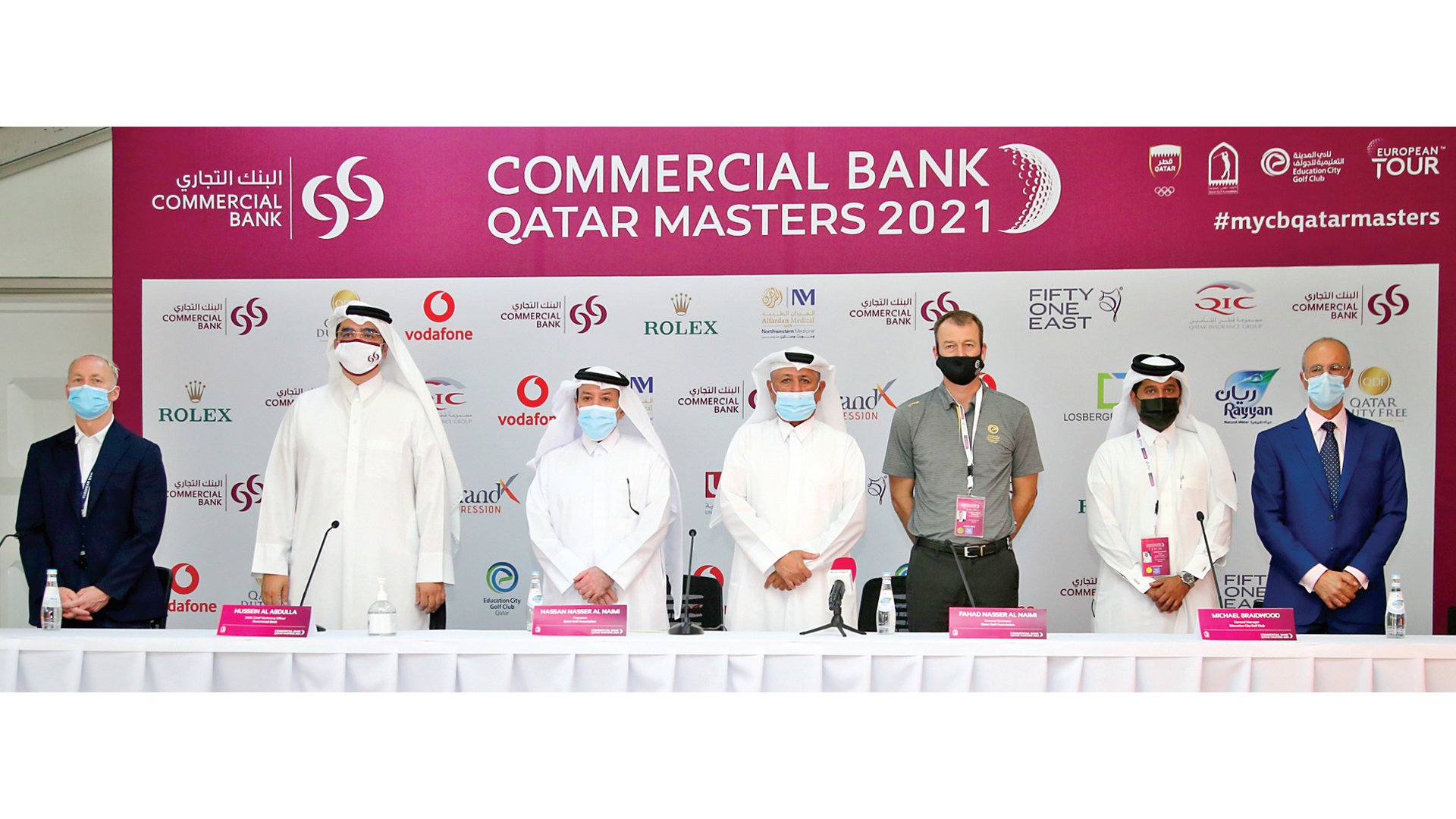 Doha, 10 March 2021 - The 24th edition of Commercial Bank Qatar Masters 2021 will swing into action at the picturesque Education City Golf Club (ECGC) from Thursday (March 11-14) marking the return of the European Tour from its enforced winter hibernation.
A number of tournaments that were due to be played in South Africa were cancelled because of COVID-19, the great efforts of the State of Qatar in ensuring ‘bio-bubbles’ with guidance from the Ministry of Public Health (MOPH) have ensured ‘ideal’ conditions for the players and all those associated to be safe and to be able to enjoy sport.
One of the landmark sporting events of Qatar, the CB Qatar Masters will be held at ECGC for the second time since the the $1.75mn event moved across from the Qatari capital at Doha Golf Club for the first time in its 23-year history to Education City Golf Club.
The Qatar Golf Association and ECGC launched the 24th edition at a press conference presided over by Hassan Nasser Al Naimi, President, QGA, Fahad Nasser Al Naimi, General-Secretary, QGA, Hussein Al Abdulla, EGM, Chief Marketing Officer, Commercial Bank, Michael Braidwood, General Manager, ECGC, and Mike Eriksson, Tournament Director, European Tour.
Thanking Qatar for making the event possible in these challenging times, Erikksson said, “It’s really different from the normal times and we are really thankful to Qatar Golf Association for what they have done to be able to play here this year. Thanks also to Commercial Bank and Education City Golf Club. We are very very proud to be here and be a part of the Qatar Masters.
“It is indeed difficult for the players and everybody has to take a couple of steps and ensure that they stay within the ‘bubble’. But with the support of everybody in this country, it has been easy in a way and we thank everybody. It might look easy from the outside but we are actually 144 players and 144 caddies, staff, televison people etc.. So it is like 500 people so the bubble gets quite big so there has be to be restrictions in place,” he added.
Errikson also appreciated the immaculate condition of the ECGC course.
“Let’s not forget we have a great golf course out there that has been in immaculate condition. It is in outstanding condition. We are looking forward to the golfers to play in the event to be broadcast to over 500 million households this week. Hopefully it’ll go smooth and everybody will be happy,” he said.
QGA President Hassan Al Naimi said that given the MOPH health safety guidelines only 20% spectators will be allowed to attend this year’s event. “The MoPH has approved 20% and so about 2000 spectators would be able to attend,” he said.
Hussein Al Abdulla, EGM Chief Marketing Officer, Commercial Bank, said, “We have been the title sponsors of the tournament for many years. We have been hosting this for many years now. The direction of the leadership of the QGA has been tremendous. We try our best to support and complement the QGA in its pursuit to educate and promote gold to our locals and specially our Qatari golfers. The other side is the Qatar Masters has become a major event as last year we had over 500 million people watch on TV from around the world. Top-notch players are here in Qatar to play in this prestigious event. We look forward to support this amazing tournament as it also serves is Qatar 2030 vision.”
Michael Braidwood, General Manager, ECGC, welcomed the return of the event to the club. “I’m really glad with the development and growth of the sport here in Qatar. Last year we had a number of acquisitions during the event for schoolchildren, initiatives to draw youngsters to the golf course. We’ve seen families coming to the golfcourse at the club, a lot of kids are coming. When we opened ECGC we were keen to draw more people to golf and had the right partner and now with support of Commercial Bank and that has happened,” he said.
Among the stars who will be seen in action in Qatar will be Spain’s Jorge Campillo, who is back to defend his title. The Spaniard overcame David Drysdale of Scotland in a closely-fought play-off to win the 2020 edition and secure his second European Tour title.
He beat Drysdale at the fifth hole of a sudden-death playoff. He’s struggled for much of 2020 but is determined to make a decent fist of his defence in a tournament where he also finished second in 2019.
The CB Qatar Masters is considered an annual ‘must-attend’ sporting and social event, first held in 1998 and widely known for bringing together the world’s best golf talent, the likes of Sergio Garcia, Rory Mcllroy, Adam Scott, Justin Rose, Ernie Els and Henrik Stenson who have all competed in past years.
The Commercial Bank Qatar Masters was attended by thousands of spectators in 2020 and shall continue to have a large global TV audience in 2021.
All eyes will be on Doha as the biggest names in the sport who will vie for the Mother of Pearl Trophy on one of the newest and superbly manicured golf courses on the Tour, designed by two-time Major champion and World Golf Hall of Famer Jose Maria Olazabal offering view of the Doha Skyline and the 2022 Education City World Cup Stadium.