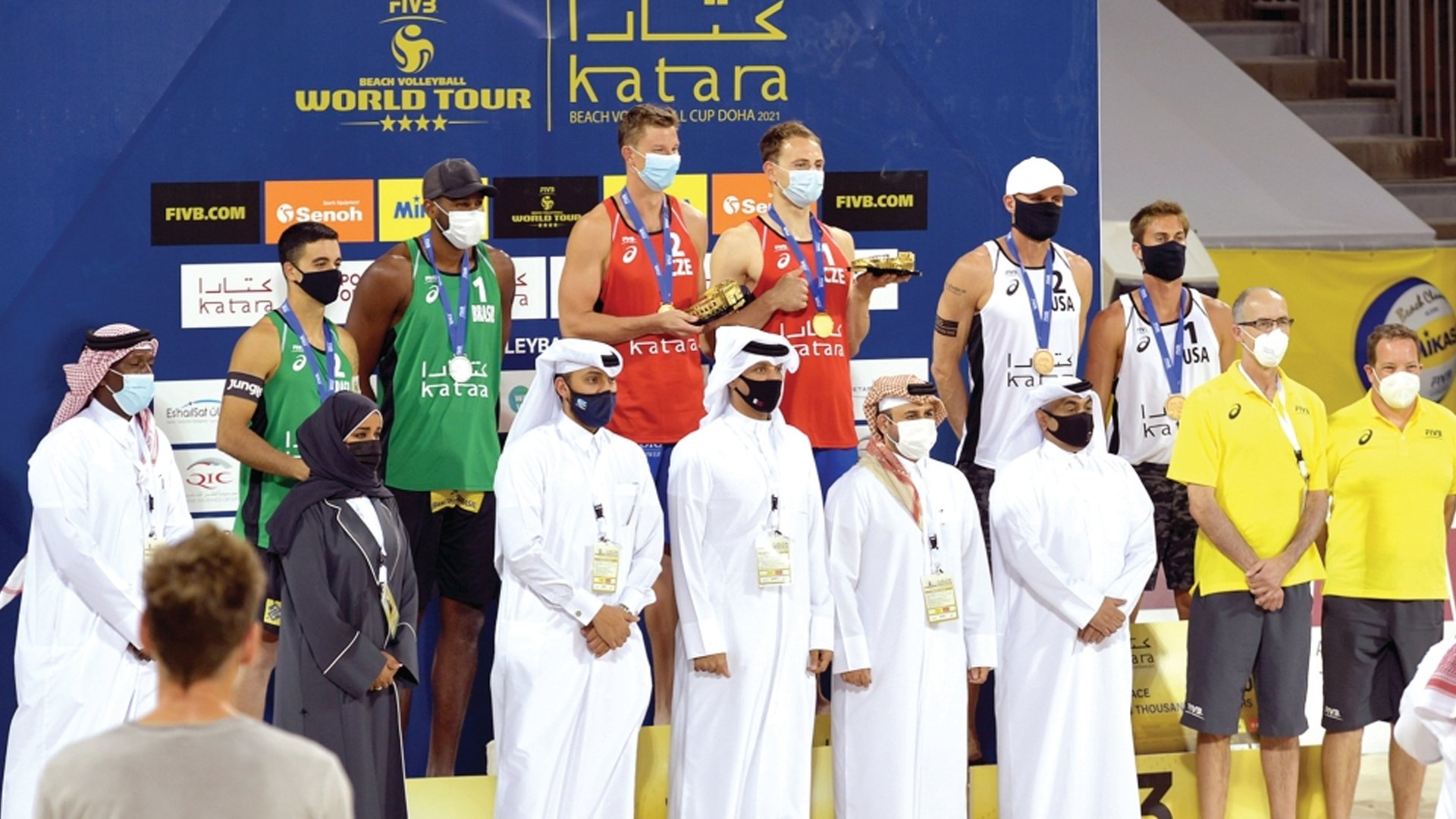 Doha, 13 March 2021 - Ondrej Perusic and David Schweiner continued their winning streak through the men's final of the Katara Beach Volleyball Cup 4-star in Doha and brought their fairy tale to a happy end. The 14th-seeded Czechs won their first ever gold on the FIVB Beach Volleyball World Tour.

In their first World Tour event as a team, Brazil's Evandro Goncalves and Gustavo Carvalhaes (Guto) took the silver medals.

Fourth-seeded Taylor Crabb and Jacob Gibb of USA grabbed the bronze. It was their second World Tour medal, after their Chetumal 4-star gold in 2019.

The first set of the gold medal match was very competitive through 10-10, after which Perusic and Schweiner broke away on a four-point run and never looked back. Some efficient blocking by Schweiner helped them stay in the lead until Perusic hit the set winner. They opened up a wide lead early into the second set and seemed to be cruising comfortably to the victory. However, Evandro and Guto took advantage of some unforced errors to level it at 17-17. The Czechs, however, stayed intact and pushed forward to a 2-0 (21-16, 21-19) win.

“We were not expecting it and I cannot really describe the emotions and feelings that we currently have. I’m really happy with our performance during the whole tournament, because finally it was not ups and downs. We had no downs, apart from my side-out in the second set of the final, and I’m really happy with this,” Schweiner said holding the trophy.

In an all-American classic for the bronze between players at a combined age of 156, Crabb and Gibb totally dominated the first set against Nick Lucena and Phil Dalhausser to win it by a huge margin. The second, however, was a hard-fought battle. In the money time, Crabb and Gibb had to deny two set points for Lucena and Dalhausser before setting foot on a 2-0 (21-9, 23-21) win.

Meanwhile, the second-seeded Alix Klineman and April Ross of USA claimed the women’s title, their fifth on the FIVB Beach Volleyball World Tour so far.

The number one pair in the world, world champions Sarah Pavan and Melissa Humana-Paredes of Canada settled for the silver. They now have 11 World Tour medals on their belt.

Third-seeded Brazilians Agatha Bednarczuk and Eduarda Santos Lisboa claimed third place and the bronze. It was their 16th medal out of 33 participations on the World Tour.

Full of fresh energy and desire for victory, both teams entered the gold medal match engaging in a tough point-for-point battle. Halfway through the first set, Alix and April reacted to a four-point breakaway by Pavan and Melissa with a five-point run of their own. And it was a battle for every point again, with frequent changes in the lead into the money time, when the Americans denied the first set point for the Canadians and April hit the winner for 22-20. The tight fight continued in the second set, but towards the end of it Alix and April put more precision into their game and edged out to a 2-0 (22-20, 21-18) victory.

“It means so much! We are so grateful to be here. We felt so welcome here. It was an amazing tournament, amazingly run, and to come out on top, especially at the first event in so long is so exciting. We worked as hard as we could work and it still feels like there is a lot of room for improvement. Against that team, it’s really tough and I felt like we pushed each other. So we are going to take notes, go back and continue to work hard,” April said right after receiving the trophy.