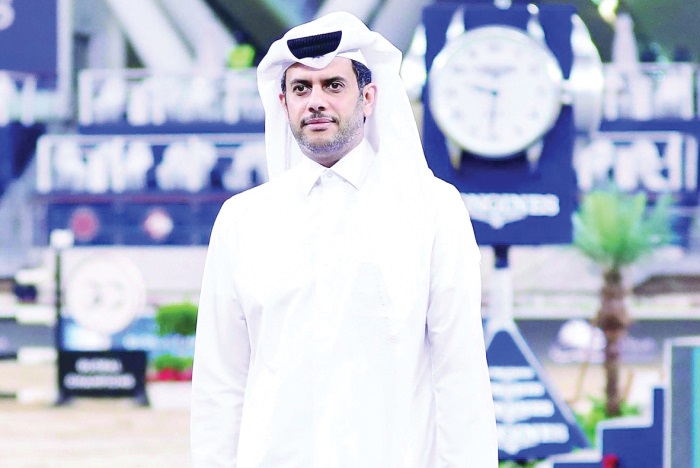 Doha, 25 March 2021 - The countdown for the 12th and final round of the fourth edition of the Longines Qatar Equestrian Tour Hathab is well and truly on with the finale competitions set to be held at the Longines Indoor Arena of Al Shaqab on Friday and Saturday.
Longines Hathab has very soon become a very popular domestic equestrian series with growing number of riders and horses each season. The 4th Hathab (2020-21) season was launched on October 7, 2020, behind closed doors at the Qatar Equestrian Federation and since then the activities have continued successfully till now amid strict health and precautionary measures against coronavirus (COVID-19).
Saturday, March 27th, 2021, will see the conclusion of the final round after which champions in all classes (Small, Medium and Big Tour, and dressage) will be crowned.
Cumulative scores of best seven of the twelve rounds are taken into consideration based on points in determining the overall champions.
The chairman and members of the Organizing Committee from Qatar Equestrian Federation and Al Shaqab (Member, Qatar Foundation) will participate in the coronation of the champions of the season 2020-2021.
In attendance will be Hamad bin Abdulrahman Al Attiyah, Chairman, Organizing Committee Longines Hathab, and President of Qatari and Asian Equestrian Federations, Omar bin Khaled Al Mannai, Vice-Chairman Organizing Committee Longines Hathab, Ali bin Yousef Al Rumaihi, Event Director and Organizing Committee Member Longines Hathab, and Badr Al Darwish, Organizing Committee Member Longines Hathab , and General-Secretary of Qatar and Asian Equestrian Federations.
Appreciating the success of the fourth season of Longines Hathab, Hamad bin Abdulrahman Al Attiyah, said, “Praise be to God, Longines Hathab has achieved success in a way that has impressed us all despite several challenges faced given the spread of the global pandemic.
“This season’s championship has played a vital role in the equestrian community as a series of local equestrian competitions that are very popular in Qatar have inspired and encouraged Qatari riders to become world champions, in addition to raising awareness of equestrian as an integral part of Qatar’s history and ancient tradition,” he added.
Omar Al Mannai has thanked all the committees of Longines Hathab for playing a positive role and ensuring a successful championship.
He stressed that the efforts of the organizers, riders and referees ensured in delivering continued success and that the Qatar Equestrian Tour’s success has led to an increase in the local market for horses as more and more riders and horse-owners are showing keenness to own horses.
He also said that there will be more demand as this market will develop as more GCC riders participate in upcoming new tournaments. “We hope that we will contribute to achieving the desired goals as every season has its own goals, and that the organizing committee will review some of the rules of the tournament’s regulations in line with our needs and requirements in the State of Qatar,” he said.
Al Mannai appreciated the backing of the families and friends of the participating riders given the stressful time of the global pandemic. The backing helped the riders keep up their enthusiasm to focus and excel and to spread the equestrian sport culture that has become widespread and desirable by a large number of young people, especially from the future riders, whose number has substantially increased.
About the 12th and final round, Al Mannai said there will be a comprehensive technical and administrative evaluation of the championship, its rounds, sponsors and its laws, and converting any negatives into positives, especially since the Qatar Equestrian Tour has benefited a lot from the support of The Social & Sport Contribution Fund (Daam), Longines, ExxonMobil and Al Salam International.
The previous season, the list of honour in the third season included Hamad Nasser Al Qadi, who won the Big Tour title, while Mohamed Khalifa Al Baker was the Medium Tour champion while Mohammad Al Ghazali won the Small Tour title. Fahad Abdul Karim emerged best in the Future Tours while Ghanem Nasser Al Qadi won the Dressage competitions (Level 2) title, and Jessica Waldon (Level 1).
The Team Championship was won by ‘The Top’ team.
Keen contests are expected in the 12th and final round this year too, this weekend.