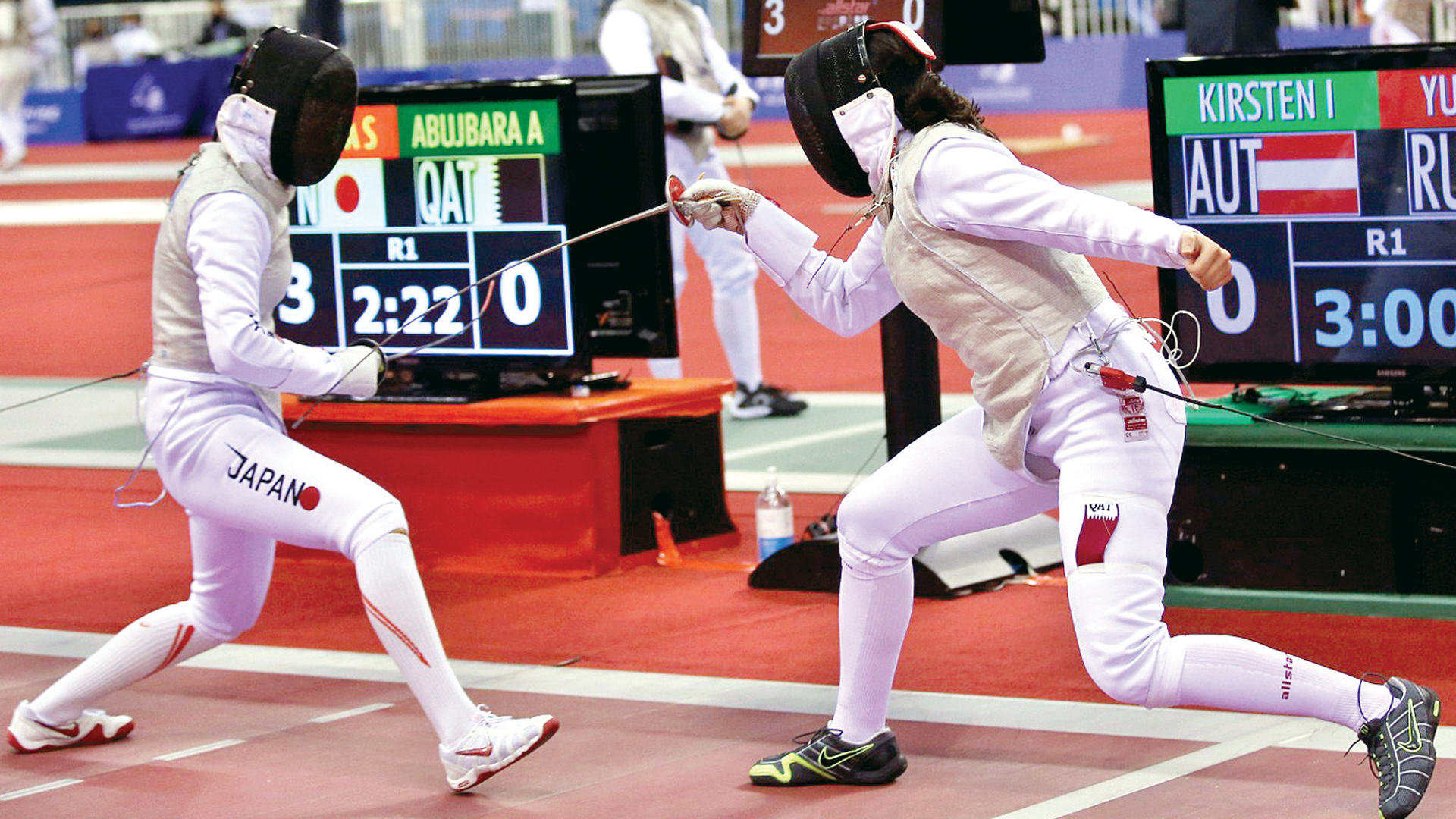 Doha, 28 March 2021 - Tunisia’s Ines Boubakri, the bronze medalist at the 2018 Rio Olympics, and the World No. 30 Julia Walczyk of Poland sensationally failed to make the round of 64 at the end of the preliminary rounds of the women’s event of the International Fencing Federation (FIE) Foil Grand Prix Doha 2021 at the Aspire Dome in Doha on Saturday.
More than 260 fencers from 51 countries are competing for points that help towards qualification for the Tokyo Olympics at the three-day tournament, which ends on Sunday.
Unlike the men’s event on Friday, the first stage of the qualifying rounds (the pool stage) involved 128 female fencers with the top-16 finishers automatically securing their last-64 tickets, where they joined the world’s top-16 ranked athletes who got the preliminary rounds bye. The rest qualifiers from the opening stage slugged it out for the remaining 32 slots.
In the end, Jacqueline Dubrovich (USA), Eleanor Harvey (Canada), Leyla Pirieva (Russia), Valentina From Costanzo (Italy), Fanni Kreiss (Hungary), Erica Cipressa (Italy), Elisa Vardaro (Italy), Maia mei Weintraub (USA), Minami Kano (Japan), Anne Sauer (Germany), Qingyuan Chen (China), Morgan Patru (England), Coralie Brot (England), İrem Karamete (Turkey), Camilla Mancini (Italy) and Anita Blaze (France) all made it straight into the Last-64 from their pools.
While it was a smooth sail for most of the top-ranks, Boubakri and Walczyk failed to make it.
Boubakri, the highest-ranked Arab fencer, succeeded out of her pool, but she later fell 15-7 to South Korea’s Mi Hye Oh in the last round. On the other hand, Walczyk could not make it past the pool stage as she could only manage to secure the fifth position with her 20 points from Pool 10.
Walczyk’s pool, which comprised 53rd-ranked Yana Alborova of Uzbekistan and Brazil’s Ana Beatriz Bulcao, ranked 83, was surprisingly led by 16-year-old Kristina Petrova from Ukraine, ranked 275; who garnered a total of 27 points as against 24 for Alborova and 16 for Bulcao. The 27-year-old Bulcao, a bronze medalist at the 2019 Pan American Games in Lima, also failed to go beyond the pool stage.
Petrova could have qualified directly for the Last-64 from the initial stage if not that she finished joint- fifteenth overall with Mancini and Blaze with the same points, and the subsequent decider went in favour of Blaze.
However, the teen sensation confirmed that her pool stage performance was no fluke as she secured a 15-9 victory over France’s Ilona Henaff in the third round to eventually earn her well-deserved qualification for Sunday’s round of events.
For Boubakri, the first Tunisian fencer ever to win an Olympic medal, the road to Tokyo still remained opened as she could qualify from the African continental qualifiers to be staged later in the year. The 32- year-old left-handed fencer is the defending champion of Africa.
Meanwhile, Egypt’s Noura Mohamed was dumped by Italy’s Elisabetta Bianchin in the second stage, while her compatriot Hany Noha, who defeated Slovakia’s Kitti Bitterova 14-13 in the second stage, was eventually defeated 15-6 in the last stage by Japan’s Sumire Tsuji to put paid to the hopes of the Arab athletes at the competition as the four Qatari representatives - Amira Boujbara, Lina Al Buainain, Ghraiba Dhahi, and Rana Ibrahim – could not make it out of the pool stage.
In the meantime, Feras Btaddini, Head Of Aspire Academy Venues & Facilities, said, “Aspire Academy is accustomed to the challenges associated with hosting a high-profile event of this nature. We are happy that the competition has been going on smoothly considering the challenges of hosting such a large number of contingents in this period of the global pandemic.” “We have successfully hosted 17 editions of the Grand Prix tournaments, though not on this scale, which have continued to receive praises both at the regional and international level. We are happy to extend the partnership with the Qatar Weightlifting and Fencing Federation even further. We look forward to an exciting finale on Sunday,” Btaddini, who is also a member of the Grand Prix Doha 2021 Organizing Committee, added.
The competition ends Sunday with the men and women’s Last 64 to quarter-finals events taking place in the morning, with the semi-finals and finals from 6pm at the same venue.