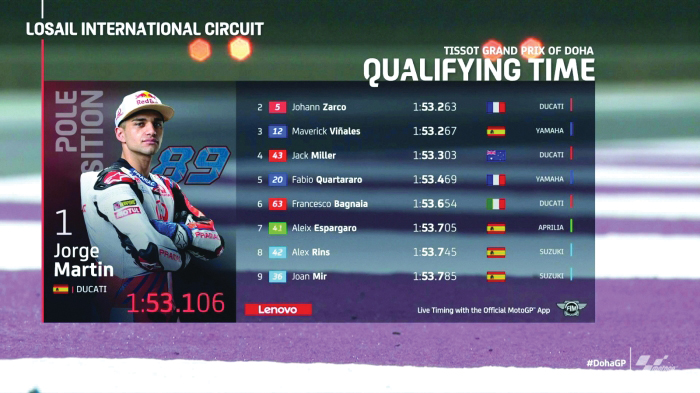 Doha, 4 April 2021 - The Losail International Circuit hosted yet another mesmerising MotoGP qualifying session and coming out on top, in just his second-ever premier class qualifying session, was rookie sensation Jorge Martin (Pramac Racing) on Saturday night.
The Spaniard set a 1:53.106 to beat teammate Johann Zarco by 0.157s who in turn edged third place Maverick Vinales (Monster Energy Yamaha MotoGP) by 0.004s.
Ahead of Q2 in Doha, a nail-biting Q1 session got underway and for the second time in two weeks, reigning World Champion Joan Mir (Team Suzuki Ecstar) was involved. After the first runs, Mir was three tenths clear of Brad Binder (Red Bull KTM Factory Racing), but the second set of flying laps saw some real changes. Luca Marini (SKY VR46 Esponsorama) sat P2 as red splits lit up everywhere, but the Italian would lose out to Miguel Oliveira (Red Bull KTM Factory Racing) by just 0.008s, as Mir improved his time to safely make it through to Q2 by a couple of tenths. Job done by the Suzuki star in a brilliant Q1 session.
The Losail International Circuit then fell silent for a handful of minutes, before the 12 fastest premier class riders so far this weekend rumbled out of pitlane for the eagerly anticipated pole position shootout. A confident rookie Jorge Martin (Pramac Racing) was the fastest rider from the get-go and set a 1:53.892 straight out the traps, immense from the Spaniard. Franco Morbidelli (Petronas Yamaha SRT) leapt up to P1 but once again, shadowing Mir, Martin was back on top of the pile. Now, his time was a 1:53.597 as Fabio Quartararo (Monster Energy Yamaha MotoGP) slotted himself into P2, just 0.017s behind Martin’s early benchmark.
After the first couple of flying laps, Martin, Quartararo and Aleix Espargaro (Aprilia Racing Team Gresini) was the provisional front row. Morbidelli and the Ducati Lenovo Team duo of Francesco Bagnaia and Jack Miller were on the second row with just over five minutes remaining, with World Championship leader Maverick Viñales (Monster Energy Yamaha MotoGP) nine tenths off in P9 – just behind Mir in P8.
Pushing, Vinales came out for his second run with the grit between his teeth. A couple of moments didn’t hamper the number 12’s lap time and Viñales went P9 to P1 with under two minutes to go. And then, Viñales was over a quarter of a second up on his next flying lap. Viñales nailed Sector 2, then nailed Sector 3 and taking the chequered flag, Viñales extended his advantage to 0.330s.
Now, attentions turned to a rookie on fire. Martin was up by 0.015s in Sector 2 on his final flying lap, with every other rider setting orange sectors. What came next was utterly sensational. Out of nowhere, Zarco gained over two tenths in the last split to snatch provisional pole by an absolute whisker – 0.004s.
However, Martin, the MotoGP new boy stormed across the line and went P1 by a tenth and a half. It wasn’t quite over yet though because Miller and Quartararo had clocked red sectors. Firing their way to the chequered flag, neither penetrated the front row but both improved their times to grab P4 and P5 respectively, but the headlines go the way of Martin.