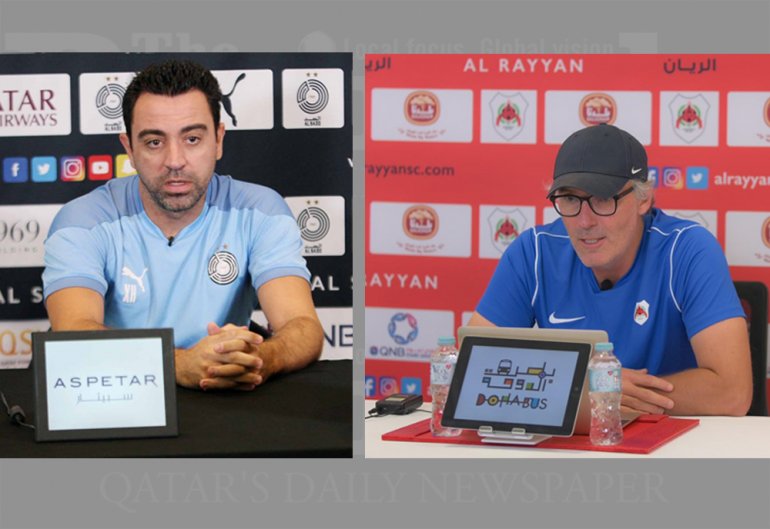 Doha, 6 April 2021 - The QNB Stars League’s (QSL) games between Al Sadd and Al Rayyan - dubbed the ‘Qatar Clasico’ - have always grabbed a lot of attention of fans and players and it will be the same when the two Qatar football giants square off today.

Although, Xavi Hernandez-coached Al Sadd have already sealed the QSL title, there is still plenty at stake for the arch-rivals in their Round 21 clash, which will kick off at 8:30pm at Al Sadd Stadium.

Xavi, whose team is yet to be defeated and have 54 points (17 victories and three draws) so far, wants to stay unbeaten to mark a memorable QSL season. Al Rayyan, coached by Frenchman Laurent Blanc, have to maintain their third position after Al Duhail sealed the second place in the previous round.

The Lions, who suffered a couple of upsets – a loss to Al Sailiya in the Ooredoo Cup and a defeat to Umm Salal in last QSL round – recently are also under pressure to make a strong comeback. They have 34 points with Al Ahli (32 points) and Qatar SC (31 points) threatening to snatch their third spot.

Xavi, meanwhile, ruled out any chance of complacency from the title holders against Al Rayyan.

“We have already won the league but we want to end the season without a loss with two games remaining,” the Barcelona legend told a pre-match press conference yesterday.

“Our mission is very difficult because we play with Al Rayyan first and then Qatar Sports Club. And both of them are still competing for the AFC Champions League positions for the next season so it will be complicated and difficult,” Xavi added.

He expected Al Rayyan to bounce back strongly after a shock defeat to Umm Salal.

“Al Rayyan have a very good team and they have changed a lot better with the new coach. They lost their last match against Umm Salal but we are expecting a lot of difficulties in the next match,” he said.

“They are the best team in the league. Preparing for this match after losing the last two matches will call for a special effort and we have to prepare differently,” the Frenchman said during a press conference.

“I think that playing against Al Sadd is an additional motivation for my team. Everyone knows that Al Sadd are a champion side who have won many games. For me, I am happy when I play against the best team and the best players and I hope that this is a strong motivation for the players. In the last two games, we lost power especially in set balls so I want to see my players doing well in this match,” said Blanc.

In other intriguing match earlier today, Qatar SC will take on Al Ahli at the same venue as both the teams are aiming for a top-four finish. Al Ahli coach Nebojsa Jovovic said yesterday: “The victory over Al Kharaitiyat that helped us get back into the top-four bracket is a strong motivation for us to be on the winning path and end the season in the best way. Now everything is in our hands and we are hopeful of finishing the season in the top four.”

Qatar SC coach Younes Ali said yesterday: “We realise the importance of the match, so our preparations were done with great energy to score a victory and all of us in the team family will fight it out to achieve what we want.”

“We were somewhat affected by the absence of a number of our players in our previous match against Al Sailiya and full-strength squad now will have a positive impact. It is a morale booster ahead of the match,” he added.