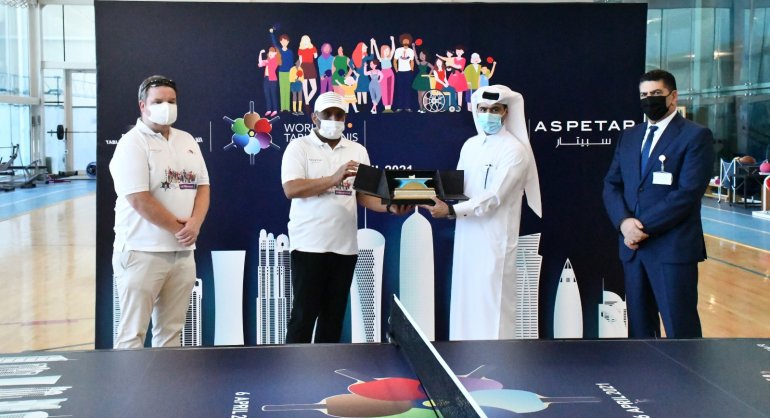 Doha, 8 April 2021 - The Chief Executive Officer of the International Table Tennis Federation (ITTF), Steve Dainton, praised Qatar for the success in organizing a historic version of the Middle East Table Tennis series of championships in very difficult conditions due to the repercussions of the COVID-19 pandemic.

Dainton said in a statement on the sidelines of a ceremony held by the International Federation for honouring Aspetar Orthopedic and Sports Medicine Hospital in Doha that the championship that was organised in Qatar concluded with a huge success and came out in the best technical and organisational way, and no case of infection appeared, and all the participants have returned to their countries in good health.

The CEO of the International Table Tennis Federation thanked Qatar Federation headed by Khalil Al Mohannadi, the CEO of Aspetar Hospital, Dr. Abdulaziz Jaham Al Kuwari, and the hospital officials for the great effort that was made to bring the championship to safety.

For his part, Al Mohannadi said that choosing to hold the World Table Tennis Day in Qatar with the participation of Aspetar Hospital in particular, is an appreciation for the role played by the hospital and the Qatari medical staff in the return to life of the world table tennis game after a year of stoppage and absence of competitions.

Al Mohannadi added: "We found great cooperation from officials of the Ministry of Health and Aspetar Hospital as well as all government agencies during the last tournament, and despite the huge participation that reached 700 players, administrators and technicians from about 71 countries, things passed safely and without any single infection with the Coronavirus after applying the health bubble system and strict adherence to sanitary measures, so we thank all the medical staff who were the first line of defense".

Qatar hosted the World Table Tennis Middle East Hub series, which also included the global and Asian qualifiers for the upcoming Tokyo Olympics, after a long pause in table tennis competitions due to the pandemic.