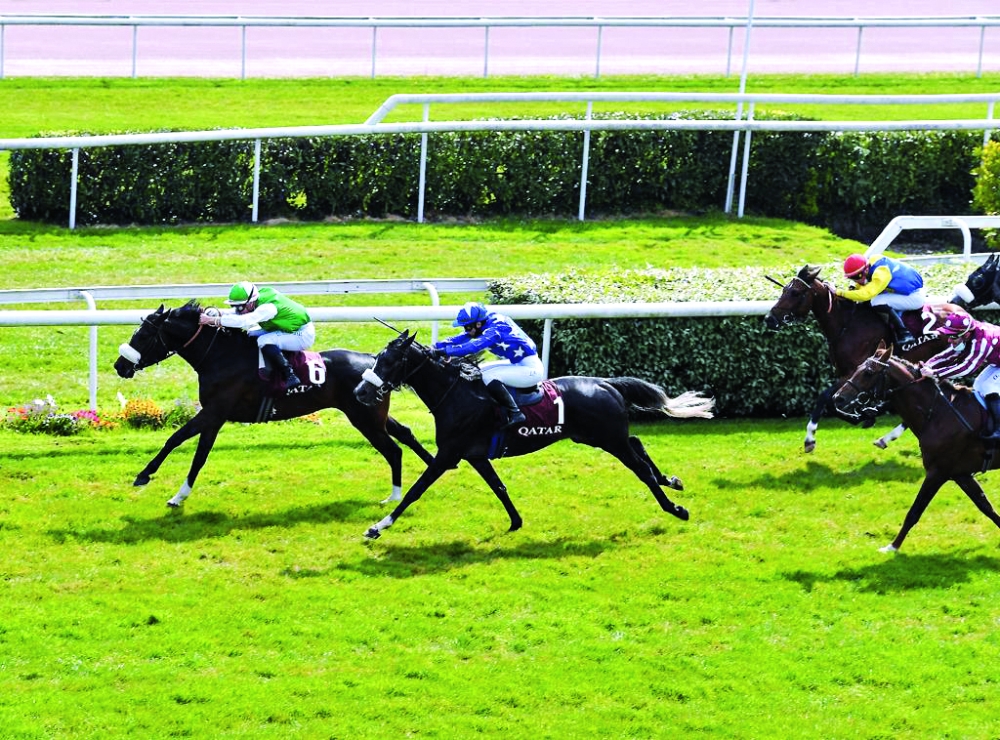 Paris, 18 April 2021 - The race meeting at Bordeaux-le-Bouscat, France, featured two QREC-sponsored exciting Purebred Arabian three-year-old maidens, the Qatar Prix Denouste for colts and geldings, and the Qatar Prix Djebella II for fillies. Both run over 1,400m, these maidens have often played host to the debuts of future Stakes’ performers.

The Qatar Prix Djebella II saw a runaway victory for the representative of Mohamed bin Fahad al-Attiyah, Sahab. Trained by Thomas Fourcy, this filly was one of his four runners, and was not the most fancied prior to the race.

Smartly away, she went straight to the lead and set a decent pace. Steadying in the bend, Ismee De Bozouls moved up to join her. Once in the straight, jockey Jerome Cabre had just to open his hands and she sped away, leaving her rivals standing. She flew down to the rail to the line, professional and untouchable.

Fourcy is also responsible for Al Wakrah, who led the rest of the field home for her owner and breeder Al Shaqab Racing. In third by two lengths was ZF Almuzon, who just denied Nelkiane, the favourite of the race, by a short head.

“She gave me a great feeling,” enthused jockey Jerome Cabre after the race. “She was very professional from the off, and so I took the advantage. She had a look around but breathed well. When I asked her to accelerate, she really showed something special. We will see if she can confirm on this run in the future, but to show that kind of speed is very promising.”

She works well in the mornings and does everything that we ask of her,” said Fourcy. “However, she’s been very impressive today to accelerate like that. Nelkiane and Al Wakrah have both worked well with her. They have a more impressive physique than the winner. To win by seven lengths like that, she must be good. She is still very immature physically, so now that she has won we will give her some time to mature. We won’t rush here – you need to be at you best for the end of the year.”

Sahab comes from one of the oldest and most successful French Purebred Arabian pedigrees from the Haras de Pompadour; her dam Manella is none other than a sister to the Group 1 producers Dormadora, dam of Dahor de Brugeres, Dormah De Brugere, the dam of Mahess du Soleil — Purebred Arabian Derby (Group 1 PA) winner — and Balladore, who produced the top-class Amyr du Soleil.

An hour earlier, in the green and white silks of Waleed Ben Zaied, Zafraan Qardabiyah had won the Qatar Prix Denouste for the young trainer Jean de Mieulle, who took his public training license out just last year. Zafraan Qardabiyah was a little keen in the early stages of this 1,400m race and moved up to sit behind the leaders in fourth position on the outside of GC Runner, under apprentice jockey Gary Sanchez, claiming two-and-a-half kg.

Josko led at a regular pace, with Syam in second. The leaders picked up in the bend, and Zafraan Qardabiyah came to challenge at the beginning of the home straight. Shying from the whip, he drifted slightly towards the center, before finding his balance and accelerating to take the lead just after the 200-meter marker.

Favourite of the race after his second place on debut over this course and distance two weeks previously, Zain El Hala in the colours of His Highness Sheikh Mohamed bin Khalifa al-Thani, had sweated up in the stalls. Coming with a strong challenge at the beginning of the home straight, his inexperience showed, and he lost essential ground as his jockey had to battle to keep him straight in the closing stages.

Despite this, he nonetheless gained on Zafraan Qardabiyah to finish strongly, coming second by half-a-length. Also making his track debut today, His Highness Sheikh Abdullah bin Khalifa al-Thani’s homebred Muntazah came in third two lengths further back, for trainer Didier Guillemin and under an educational ride from Olivier Peslier.

Former assistant to Alban de Mieulle in Qatar, Jean de Mieulle is now in his second season as a licensed trainer in France and commented on his winner: “Zafraan Qardabiyah came here in good condition. I knew that he has a bit of speed – he’s run very well. I’m very pleased with his performance today.”