FIFA Arab Cup to be a celebration of Arab unity, says Infantino 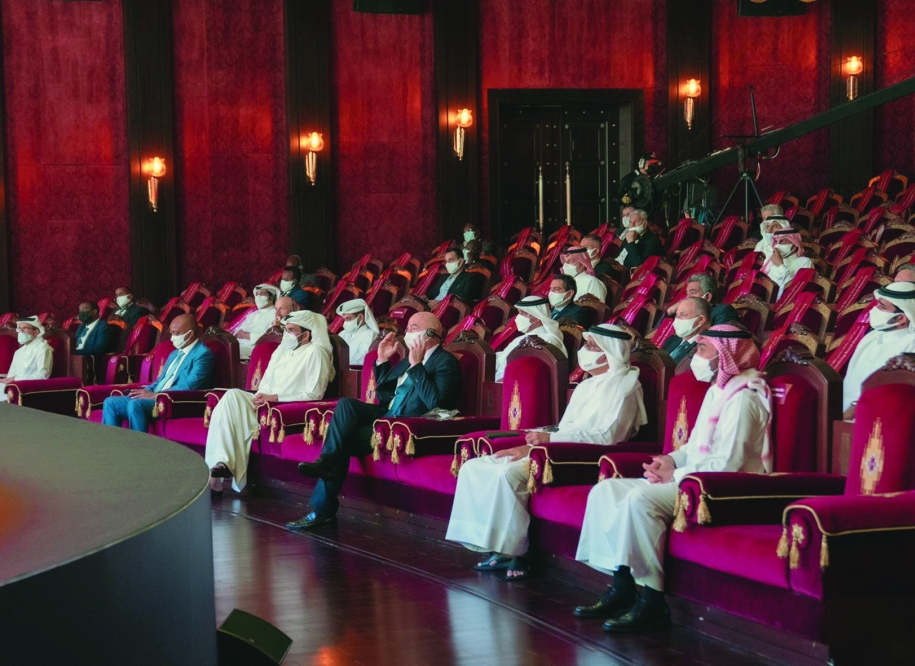 Doha, 28 April 2021 - Swiss President Gianni Infantino confirmed (FIFA) The upcoming Arab Cup, which will be held in Doha next December, will unite the Arab world.

Infantino said in a speech delivered yesterday evening during the draw ceremony for the tenth edition of the Arab Cup that was held yesterday evening at the Opera House in the Cultural Village Katara speaking at its beginning in Arabic Ramadan Karim: I welcome all the attendees to this lottery ceremony, in the forefront of whom is His Excellency Sheikh Joaan bin Hamad Al Thani, President The Qatar Olympic Committee, Sheikh Salman bin Ibrahim, president of the AFC, and all those present are drawing lots. He added: We are happy to be in this beautiful and wonderful place in the Qatar Opera House in the cultural district of Katara, as it is a wonderful place and a wonderful evening for the Arab football family before this draw. He continued: There are 450 million Arabs who will unite during the Arab Cup to watch the big tournament and they will follow the best team that can win the championship cup, which will be a strong tournament.

He added: I expect that the next tournament will be very special and an important event for all football players in the Arab world, and a celebration of unity, brotherhood and football, an event that will lead to the first World Cup in the Middle East at the FIFA World Cup Qatar 2022. The President of the International Federation welcomed everyone and wished all the participating teams success. And an enjoyable watch for the large crowd that will follow this event.

President of the Football Association:

An important station for Annabi

His Excellency Sheikh Hamad bin Khalifa bin Ahmed Al Thani, President of the Qatar Football Association, expressed his happiness at hosting the Arab Cup at the end of this year, indicating that the tournament will represent a golden opportunity for national teams from around the Arab world to compete in a prestigious tournament that will be watched by fans all over the world. Place.

His Excellency stressed the importance of the tournament in Qatar’s preparations to host the 2022 World Cup, pointing out that the Qatari team’s participation in the Arab Cup competitions will constitute an important milestone in the team’s preparation for competition in the upcoming football World Cup on its home soil and among its fans next year..

The Arab Cup is a good experience for the World Cup

About his opinion on the groups, he said: Strong groups and we hope that it will be a successful tournament and that everyone will achieve success in it and provide the best levels during it.

An ideal opportunity for everyone

Iraqi star Yunus Mahmoud expressed his great happiness to participate in the Arab Championship draw ceremony last night, and said: The most beautiful thing about this tournament is that it is an ideal opportunity for these teams to compete with important challenges and strong competitions that raise the technical level of these teams..

Younis Mahmoud said: I have faced many important challenges in Qatari stadiums with many clubs, and the truth is that development is evident in all sporting and non-sporting facilities, and therefore obtaining the honor of organizing the World Cup Finals is the least that Qatar deserves as a result of all these gigantic efforts..

He added: I do not forget my participation in the 2007 AFC Nations Cup. It was a very important tournament for us because it came in a difficult period, and thank God that we succeeded in crowning this title at the time, and my happiness was doubled because I was the one who scored the winning goal in the final match..

He continued: I think that the competition will not be easy for us in the tournament, especially that the Iraqi team came in a purely Gulf group and I consider it a miniature Gulf Cup, but at the same time I admit that it is a good thing that we moved away from the Egyptian, Algerian and Tunisian teams..

His Excellency Mr. Hassan Al-Thawadi, Secretary-General of the Supreme Committee for Delivery and Legacy, said: The Arab Cup will bring together the national teams and fans of 23 teams from the Arab region, which makes it attractive to FIFA (FIFA) For several reasons, the most important of which is that it is the first tournament of its kind that brings together the teams of the Arab region under an umbrella FIFA.

Al-Thawadi added: The tournament comes exactly a year before Qatar will host the 2022 World Cup, and it is an opportunity to test the readiness of the facilities, operational processes and plans to host the Qatar 2022 World Cup, which is scheduled to start less than a year after the conclusion of the Arab Cup competitions. He continued: The tournament itself is an Arab gathering from the ocean to the Gulf for soccer teams, especially as it represents the elite teams from Asia and Africa and has a prominent presence in global football, and the fans have always been eager to see the national teams competing for this title, which confirms the passion of their peoples. Extreme football.

Haitham Mustafa, the former Sudan national team star who participated in the draw ceremony, confirmed that the most important goal for the Sudan team is to overcome the hurdle of the qualifying match with the Libyan national team in the qualifiers, and then think about the main role of the tournament..

He added: We must present a big match against a great team like Libya, and with determination and determination, we will achieve victory and qualify for the Arab Cup Finals, and the current team is distinguished and developed and succeeded in qualifying for the finals of the next African Cup. And about the chances of the Sudan team in the group in which he signed with Egypt and Algeria, he said: The most important thing for us is that we reach the finals and then think about the group and, God willing, we present a distinguished ball that supervises Sudanese football.

Wael Gomaa: The Egyptian national team has all the ingredients for success

Wael Gomaa, the Egyptian soccer legend and former Al-Ahly player, described the Arab championship with an excellent idea and a great experience, and said: The establishment of it at this time will positively affect all participating teams, and thus will have a greater opportunity to compete strongly for all other regional and continental titles. Jumaa recalled the memories of his crowning many continental titles with the Egyptian national team and Al-Ahly club and said: I have succeeded in crowning the Egyptian national team with the African Nations title on 3 occasions, and the Champions League with Al-Ahly on six occasions, and the truth is that we have an audience and people who love football and our constant goal is to please these fans The joy of these fans was the most important to us, so the search for titles did not stop throughout my time in the stadiums. He continued: The Egyptian national team has all the ingredients that help it achieve success in this tournament and has distinguished players in all lines and has a distinguished technical apparatus. The Egyptian star concluded his speech by saying: All we hope for is that the Arab Championship competitions will come out as we all hope in a way that benefits all teams, especially that the African teams will compete in the African Nations Championship next January, and it will also be a great experience for Qatar. Because she will experience the World Cup stadiums through this important tournament.