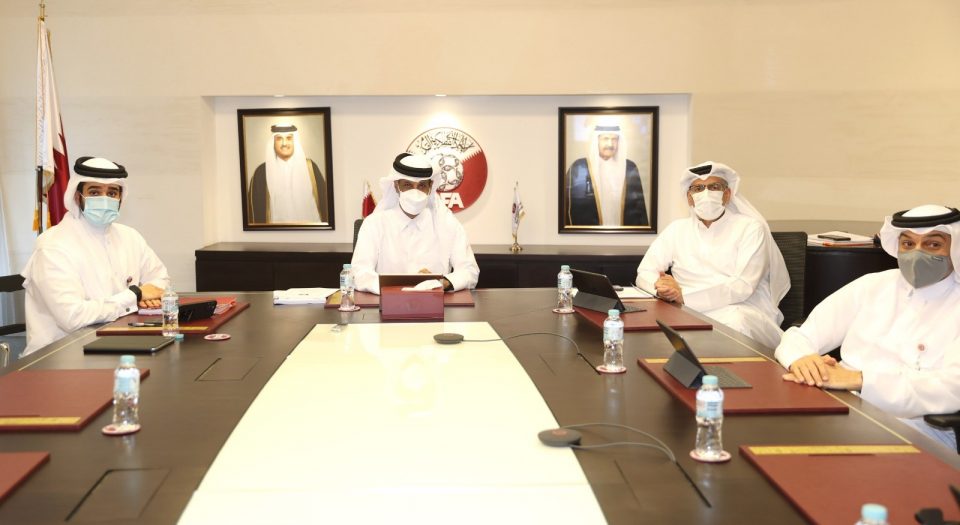 Doha, 25 May 2021 - HE Sheikh Hamad bin Khalifa bin Ahmed al-Thani, President of the Qatar Football Association (QFA), chaired the Ordinary General Assembly of the federation virtually.
The meeting was attended by QFA’s Executive Committee members Saud Abdul al-Aziz al-Mohannadi, Ahmed Abdulaziz al-Buainain, Hani Talib Ballan, Ibrahim Khalil al-Muhannadi, Sheikh Ahmed bin Hamad al-Thani and Abdul Rahman al-Qahtani, in addition to members of the General Assembly from the clubs, directors of departments and heads of the various committees of the federation.
The General Assembly’s agenda included a number of important matters, such as approval of financial statements and review of the budget approved by the Executive Committee besides presentation of the report on various activities of Qatar Stars League.
In addition, election was held for the vacant seat on the QSL Executive Committee, with Mohamed Ali al-Marri, CEO of Al Sailiya football club, and Faisal Ali al-Shuaibi, CEO of Qatar SC, contesting for it. The voting process resulted in the victory of al-Shuaibi as a representative of the clubs on the Executive Committee.
Sheikh Hamad in his opening address emphasised that the vision of the QFA during the past decade was to become a football association characterised by leadership, creativity and victory. “And this vision has inspired us to work hard, persevere and strive to achieve our goals. Our aim was to encourage and expand the football fan base through communication and participation with the local community, improving the football infrastructure and creating a professional football culture through a professional league (Qatar Stars League) and more importantly discovering, developing and preparing young talents for the national teams,” the QFA chief said.
Sheikh Hamad said the QFA has set six strategic goals on which the annual plans and interim goals are based so that “we can measure the progress made objectively and scientifically’
“Our goals for future are as follows: Building and developing successful national teams at all levels; Provide an effective system of governance for the game of football; Technical development for leagues, competitions, clubs and referees; Increase the rate of participation in football activities in the community; Increase revenue ratio to create sustainable growth over the long term; Active communication with the football community at the international level and building strong and fruitful relationships,” he added.
The QFA president addressed several key aspects of the federation’s previous work plan, especially with regards to the national teams’ success. “The youth team won the Asian Cup in 2014 and qualified for the World Cup twice, while the Olympic team won the third in Asia, although the ambition is to play in the Olympic Games. The first team won the AFC Asian Cup title for the first time in 2019 and took a giant leap in the FIFA rankings. Our players too won many individual awards,” he added.
Sheikh Hamad also referred to the national team’s participation in major events such as the Copa America, the European qualifiers and the next appearance in the Golden Cup, calling it as in idea preparation for the 2022 World Cup at home.
On the QNB Stars League, he said: “We will make a plan to develop the league and this will be in co-ordination with the clubs through the presence of experts. We seek to expand the circle of professionalism by joining the second-class clubs of the Qatar Stars League foundation.”