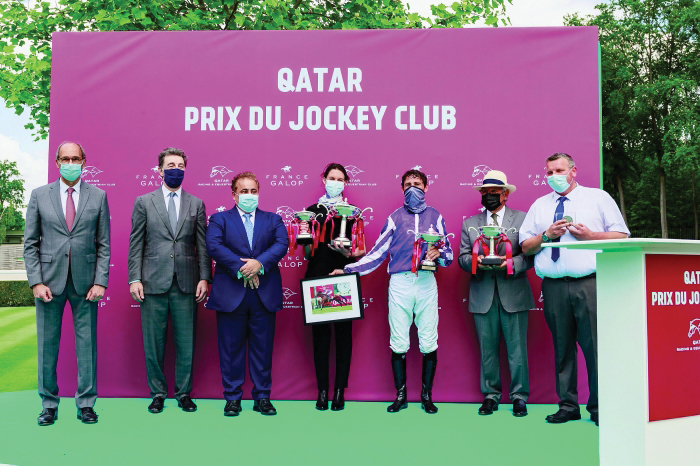 Chantilly/ France, 7 June 2021 - The Qatar Racing and Equestrian Club sponsored the Qatar Prix du Jockey Club, the French Derby, for the first time in 2021. This Classic race reunites the best European 3-year-old colts and is also known as a stallion making race, with the likes of Lope de Vega, Shamardal, Dalakhani and Montjeu all former winners.

His Excellency Sheikh Ali bin Jassim Al Thani, Ambassador of Qatar to France, and Mr Edouard de Rotshchild, President of France Galop, were present at Chantilly and presented the trophies to the winners.

The Irish -rained St Mark’s Basilica, who started favourite, was the clear winner of this year’s exceptional edition, which reunited the cream of the 3-year-old crop, three weeks after his triumph in the Group 1 Emirates Poule d’Essai des Poulains at ParisLongchamp. His was ridden once again by Ioritz Mendizabal, who gave his mount a dream ride on the rail.

By leading French stallion Siyouni (based at the Normandy stud of His Highness the Aga Khan), St Mark’s Basilica, gave his rivals the slip 300 metres from the post. Sealiway, representing the Haras de la Gousserie and Guy Pariente, came in second for trainer Frédéric Rossi. Millebosc was a close third: he runs in the colours of Gérard Augustin-Normand and was ridden by Grégory Benoist.

He is trained in Deauville by the young Stéphanie Nigge, who was having her first runners in this Classic race.

St Mark’s Basilica is trained by Irishman Aidan O’Brien, one of the most successful trainers in Europe (he has won the Epsom Derby eight times), although success in the Qatar Prix du Jockey-Club had eluded him until now! He is owned by the Coolmore, one of the powers of the Thoroughbred industry, and an entity which has forged a reputation as a veritable stallion factory.

“Ioritz rode a very good race, just like he rode in the Poule d’Essai”, commented Aidan O’Brien. “We always thought he would get the 2,100 metres, even if he has got a lot of speed. He had come on a lot since the Poule d’Essai des Poulains. The plan was always to run in the Poule d’Essai and after the Qatar Prix du Jockey Club. You need to have a very good horse to win the Jockey Club. His ability to accelerate where it counts and his temperament have made the difference. He is able to adapt to any type of ground, even if I think that, by looking at his action, he will be better suited by better ground.”