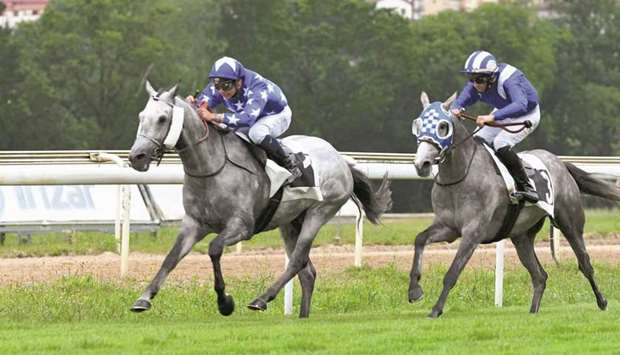 San Sebastian/ Spain, 10 June 2021 - In the colours of His Highness Sheikh Mohamed bin Khalifa al-Thani, Khateer Alkhalediah kept his winning streak when victorious at the Spanish track of San Sebastian in the Wathba Stallions Cup on Wednesday.

This was a third straight win for this five-year-old Purebred Arabian horse, who is trained in France by JF Bernard.

He was ridden to a half-length victory by jockey Gary Sanchez in this 1,600m contest for four-year-old and older Purebred Arabians.
Khateer Alkhalediah debuted his five-race career in France in February at Pau when he finished seventh over 2,000m. He followed that by a second seventh place over 2,300m at Tarbes in April.

His trainer then brought him back to the mile distance in May and since then has been unbeaten over this shorter trip with two wins at Waregem, Belgium in early and mid-May, leading him into yesterday’s victory.