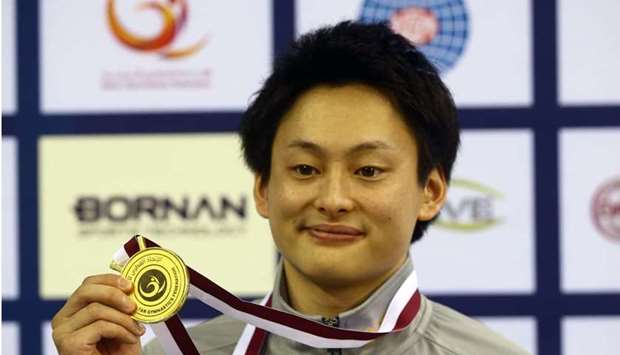 Doha, 27 June 2021 - Japan’s Hidenobu Yonekura on Saturday qualified for the next month’s Tokyo Olympics by winning the men’s vault final during the 13th FIG Artistic Gymnastics World Cup at the Aspire Dome.

The Doha leg was specifically designed by FIG for individual specialists and was applicable to those who couldn’t qualify to the Olympics through the 2018-2019 World Championships.

Before heading into the vault final, South Korea’s Shin Jeahwan led the overall rankings. But Yonekura overtook the Korean with a score of 15.016 in the final on Saturday that earned him a ticket to Tokyo. Igor Radivilov and Andrey Medvedev finished second and third respectively on the podium.

Italy’s 2006 world all-around champion Vanessa Ferrari finally grabbed the opportunity to win the women’s floor final which also earned her a ticket to the Summer Games next month. The floor Olympic qualifying spot was up for grabs, and the race was between her and compatriot Lara Mori.

Mori led the floor rankings ahead of the final, and Ferrari needed to either win the final, or place second but ahead of Mori with a score higher than 13.266 to secure the top floor ranking spot. The 30-year-old collected 14.266 points for her rhythm and acrobatic style on the floor. Mori finished second (13.633) while Brazil’s Lorrane Oliveira (12.633) came third.

Hungarian Zsofia Kovacs, who finished fifth, and Ukrainian Diana Varinska (seventh) have already qualified for the Olympics before the Doha event.

Turkey’s reigning European champion Ferhat Arican was confidence personified on the parallel bars. The 27-year-old combined grace and rhythm to pick up the gold (15.566 points).

Petro Pakhniuk, who won a gold with the Ukraine team at the European Championships last December, finished second followed by Brazil’s Caio Souza.