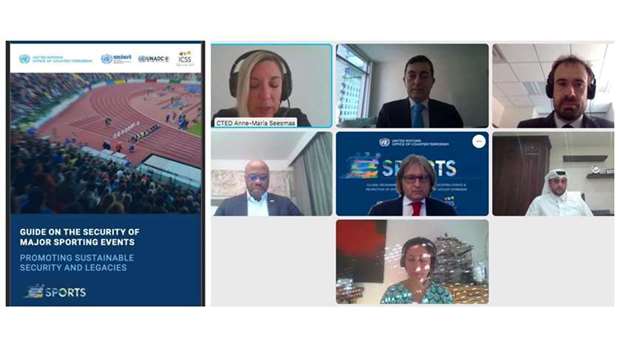 New York, 3 July 2021 - In a major step forward in the fight to keep major sports events (MSEs) safe and secure against constantly evolving threats posed by terrorism and violent extremism, the United Nations Office of Counter Terrorism (UNOCT), United Nations Interregional Crime and Justice Research Institute (UNICRI), United Nations Alliance of Civilisations (UNAOC) and the Doha-based International Centre for Sport Security (ICSS) have launched the 'Global Guide on the Security of Major Sporting Events: Promoting Sustainable Security & Legacies'.
The 195-page guide, which will be available in all six United Nations official languages, represents a "significant step forward in the advancement of policies to mitigate risks to eventual targets in the context of major sporting events", according to a press statement issued in Doha by the ICSS.
The launch took place in the context of the second Counter-Terrorism Week held at the United Nations from June 21 to 30 in the presence of high-level representatives of governments, international and continental sport federations, as well as intergovernmental and non-governmental organisations.
The first-ever guide was developed through a structured process of consultations with experts and representatives from international organisations, sport bodies and UN member states, which started in March this year.
The guide represents one of the milestones of the 'Global Programme on the Security of Major Sporting Events, and Promotion of Sport and its Values as a Tool to Prevent Violent Extremism', an initiative led by the UNOCT, in partnership with UNICRI, UNAOC and the ICSS, in consultation with the United Nations Counter-Terrorism Committee Executive Directorate (CTED), and with the contributions of member states, international and regional organisations such as Interpol and the Council of Europe, sports associations, the business sector and academia.
The programme is supported by Qatar, China through the United Nations Peace and Development Fund (UNPDF) and South Korea.
The guide represents the "most comprehensive in-depth analysis of the political, social and financial dimensions for consideration by key decision-makers for the security elements of major sporting events to date", the statement notes.
Mohamed Hanzab, chairman of the ICSS, said: “This guide crystalises the experience of generations of policy and decision-makers, and their visions on how to plan the security of major sporting events, including with regard to legacy factors, sustainability and co-operation across sectors. It provides an exhaustive overview of all the forms of support and mutual assistance available within the international community to protect such events as a common good across nations, as a catalyst for change and a staging area for global citizens.”
Massimiliano Montanari, CEO of the ICSS, added: “Through the guide, we wanted to deliver a document able to inform and inspire all those who will be responsible for making the main decisions on the policy reforms and structures to be put in place, the legislations to be adopted, the international agreements to be stipulated, and the resources to be allocated to plan a successful major sporting event and its legacy."
Finally, the guide provides hosting nations with a reference document showcasing all the forms of technical assistance available at the international level, as provided by international and regional organisations such as the UN, Interpol, the Council of Europe and World Health Organisation, as well as sport bodies and specialised stakeholders like the ICSS.