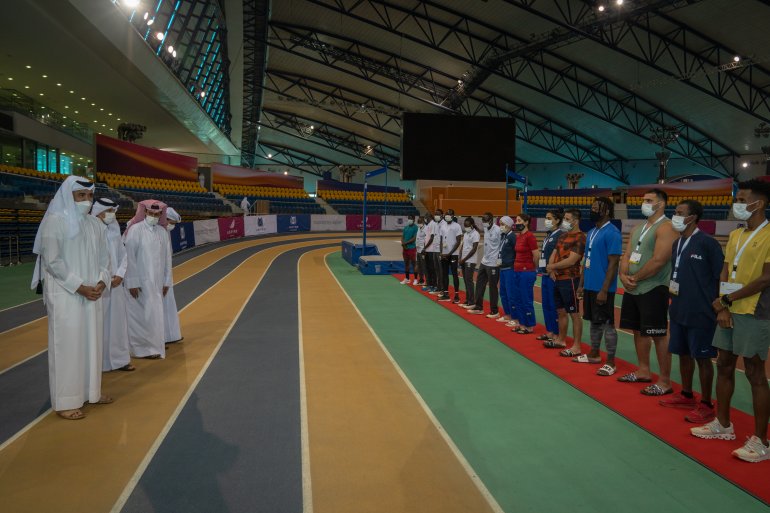 The 29 members of the EOR who will be competing across 12 sports at Tokyo 2020 arrived in Doha on 11 and 12 July. The world-class Hamad International Airport (HIA) received the EOR and provided a dedicated counter for the team. Training sessions at the state-of-the-art Aspire Dome were held yesterday and today. In between training, the athletes took part in Tokyo 2020 workshops with IOC officials.

“We are honoured to have the opportunity to make a small contribution to the inspiring journey of the Refugee Olympic Team. We know how hard they have worked to be able to compete at the Olympic Games and we hope that this training camp at the state-of-the-art Aspire will help them to compete at their best in Tokyo.

“The team’s performances will not just inspire billions of people but will also raise awareness about the scale of the global refugee crisis. At the Qatar Olympic Committee we are passionate about ensuring that refugees and displaced people have access to sport. We believe strongly in the role sport can play in empowering people and bringing hope at times of great hardship. Through our work with the Olympic Refuge Foundation we will continue to support refugees in any way we can.”

The QOC is a founding partner of the Olympic Refuge Foundation (ORF) and QOC President HE Sheikh Joaan is a member of the ORF Board. The ORF aims to create safe, basic and accessible sports facilities in areas where there are refugees, a displaced migrant population or internally displaced people, where all children and young people can play sport and take advantage of sport’s multiple benefits.

“We were pleased to host the Refugee Olympic Team (EOR) in Aspire Zone, and we harnessed all possibilities and means of technical and administrative support to benefit from all our training facilities equipped for several different sports, and it is a great honour for the Qatar Olympic Committee to choose Aspire Zone to host the training camp. I wish them all the best in their participation in the 2020 Tokyo Olympics.”

In addition, Aspire Zone Foundation is always keen to provide outstanding services to local and international teams, by providing all their needs up to the highest standards by the convergence of training, accommodation, and entertainment facilities.

The QOC Secretary General HE Jassim Rashid al-Buenain thanked ministries and governmental and private entities for their cooperation with the QOC and their contribution to the success of Refugee Olympic Team training camp.  In this regard, al-Buenain lauded the efforts made by Ministry of Interior, Supreme Committee for Crisis Management, Hamad International Airport, Qatar Airways and Aspire Zone to help the QOC organize this training camp.