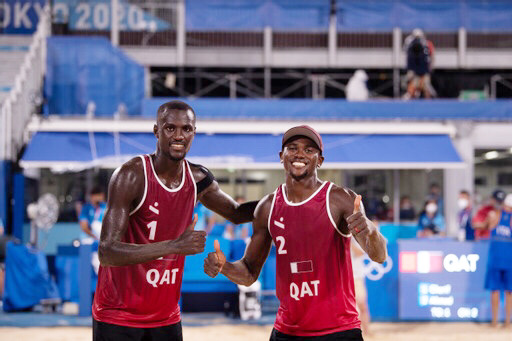 With this victory, Qatar’s Cherif Younousse and Ahmed Tijan secured their spots in the knockout stages of the men’s Olympic beach volleyball tournament.

The new men’s FIVB World Ranking leaders, Cherif and Ahmed began their Olympic campaign with a 21-17, 21-16 victory over Adrian Heidrich and Mirco Gerson of Switzerland on Sunday

To finish on top of the pool, the Qatari pair will have to overcome Jacob Gibb and Tri Bourne of USA on Friday.

For his part, Qatar's Mohamed Al Rumaihi finished the first day of the Men's trap shooting qualifying rounds in the 16th place with 72 points.

The top six qualify for the final with the field being led by Kuwait’s Abdulrahman Al Faihan with 74 points. The last two qualifying rounds to will be held on Thursday.

On the other hand, Team Qatar athletics stars arrived in the Olympic Village in Tokyo on Wednesday after their training camp in Takasaki, Japan.

In a brief statement on Wednesday, Qatar’s middle-distance runner, Abderrahman Samba who will compete in the men’s 400m hurdles said:” I will fight tooth and nail to honour the country in the Tokyo 2020 Olympics”.

“Nothing is easy in these games, but I will put all efforts to run faster, turn my dream into reality and step up the Olympic podium”. he added

Hours away from the kick-off of athletics competition, Mohammed Essa Al Fadalah, Assistant Secretary General of Qatar Athletics Federation has confirmed that the training camp of team Qatar’s athletes at the Japanese city of Takasaki went with the plan and kept the athletes perfectly ready to fight for the best results.

“Despite the tough restrictions being imposed against the pandemic to keep the athletes safe and protected, our athletes are fully satisfied with the outcome they have from Takasaki camp” added Al Fadalah.

On other hand, Qatar’s former sprinter and Athletics Federation’s Assistant Secretary General Talal Mansour has appreciated the standard of Qatar athletes preparations for the competition.

“This training camp met the standards of the plan set up by the federation and we are hopeful that will pay off and push up the Qatar’s athletics to new heights of success”.