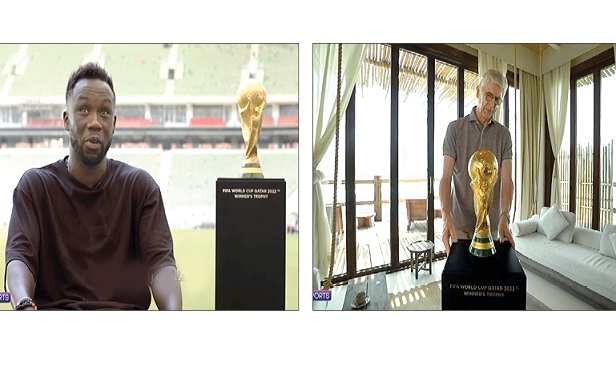 Doha, 20 September 2021 - beIN SPORTS will broadcast the sixth episode of its exclusive programme Welcome to Qatar with football legend and FIFA’s Chief of Global Football Development Arsene Wenger and former Arsenal and Manchester City defender Bacary Sagna on Tuesday.
As the official broadcaster of the FIFA World Cup Qatar 2022 across the Middle East and North Africa (Mena), beIN SPORTS monthly programme takes viewers on an incredible journey across Qatar and its world class stadiums and facilities as the country prepares to host one of the biggest sporting competitions in the world.
In the sixth episode of the series, Arsene Wenger and Bacary Sagna invite viewers on an exclusive tour around Qatar as they visit stunning landmarks in the country including Katara Cultural Village, Al Safliya Island and Al Thumama stadium, one of the eight world class FIFA World Cup Qatar 2022 stadiums.
On the FIFA World Cup Qatar 2022 host nation, Arsene Wenger said: “I am surprised by the quality of the infrastructure, buildings and how clean the country is. There is also a great feeling of security in the country. I always feel that it is less hectic when you come to Qatar, every time I come here I calm down. I must say the country has the money but it is being used in a very intelligent way – they have gone for quality and I like the fact that the sole of the country is preserved”.
Wenger continued: “I would say somebody who really loves football should come to Qatar because you can watch four games per day during the 2022 World Cup – you can physically go to four games during the day, it is possible to do that in Qatar and that is my challenge to actually go to four games in one day during the World Cup. What I like is that everybody in Qatar is focused on making it a successful tournament, there is a feeling of security and the country is already prepared so early!”
Bacary Sagna said: “This FIFA World Cup will probably be the best in the world. The facilities are just crazy, as an athlete you want to be playing and training in the best facilities and I think the stadiums here are the best in the world. I can clearly see the changes in the country and how equipped it is for this tournament. The tournament will also be played during winter time so that is something new that everyone would like to experience”.
Sagna continued: “Unfortunately I won’t be playing in this FIFA World Cup. I wish I was still playing after seeing the facilities and the atmosphere. As a player it is just a dream to be able to come here and play in such a beautiful country like Qatar”.
The sixth episode will be broadcast exclusively on beIN SPORTS Premium 1 at 20:30 Makkah Time (GMT +3).