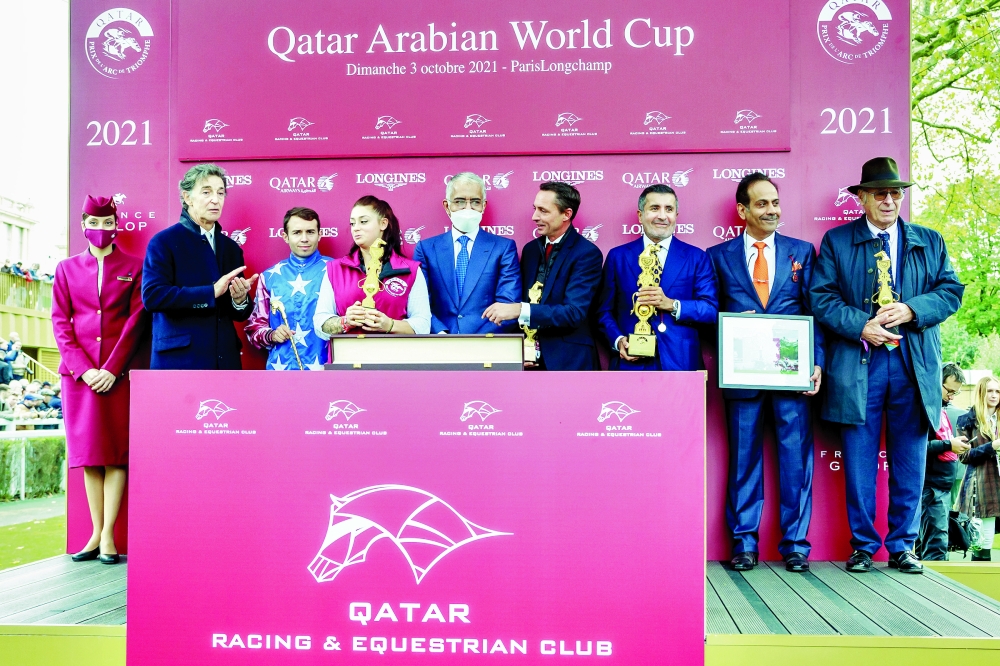 Paris, 4 October 2021 - German outsider Torquator Tasso scored a surprise victory in the 100th running of the Qatar Prix De L’Arc De Triomphe at ParisLongchamp on Sunday.
His Highness Sheikh Abdullah bin Khalifa al-Thani presented the trophies to the winners in the presence of His Highness Sheikh Mohamed bin Khalifa al-Thani and Her Royal Highness Princess Anne as the curtains fell on the events of the 100th edition of the Qatar Prix de l’Arc de Triomphe.
The racing weekend was sponsored by Qatar through the cooperation between the Qatar Racing and Equestrian Club (QREC) and France Galop, the horseracing authority in France.
It was a fitting finale with Qatari victories on the final day as HE Sheikha Reem Bint Mohamed bin Khalifa al-Thani owned Hoggar De L'ardus won the Qatar Arabian World Cup and earlier on the day Ali bin Hamad al-Attiya’s Zellie won the Qatar Prix Marcel Boussac (Gr.1)
However, it was Torquator Tasso’s victory in France's most iconic race that was one of the biggest shocks in its history.
Trained in Germany by Marcel Weiss, the four-year-old was one of the outsiders of the field. Only beaten by three quarters of a length in the 2020 German Derby by last year’s Arc second In Swoop (Alderflug), Torquator Tasso produced a career best to win under an excellent ride from jockey Rene Piechulek.
Drawn wide, Torquator Tasso slotted into mid-division of the field. Travelling three-wide, the colt always looked comfortable as Adayar (Frankel) cut out the early running. With little change to the order and a relatively steady pace being set, the field was tightly grouped. Favourite Tarnawa (Shamardal) travelled well but was boxed in against the rail.
On entering the home straight, Torquator Tasso took closer order on the outside and was ridden confidently. Adayar stole a couple of lengths on the field 400m from home but was chased hard by Hurricane Lane (Frankel), Torquator Tasso and also, Tarnawa. Staying on strongly, Torquator Tasso swept over the top in the closing stages and got up to win by three quarters of a length from Tarnawa. Hurricane lane finished third, while early leader Adayar took fourth.
Jockey Rene Piechulek said: “That is the first time I have ridden in the Arc and I would like to thank everyone involved for giving me the chance. I wanted to ride him handy and I know how good he can be. When I asked him for an effort in the straight, he gave me everything. I think I will only realise tomorrow what has actually happened”
Earlier, winner of the Qatar Derby Des Pur-Sang Des Arabes De 4ans in at Chantilly, the four-year old pure-bred Arabian Hoggar De L’ardus (Mister Ginoux x Alfa De L’Ardus) carried the colours of his owner HE Sheikha Reem Bint Mohamed bin Khalifa al-Thani in the Qatar Arabian World Cup (Group 1 PA)
His Highness Sheikh Abdullah bin Khalifa al-Thani presented the World Cup to His Highness Sheikh Mohamed bin Khalifa al-Thani.

Trained by Thomas Fourcy, the colt stormed clear of his rivals under a confident ride from jockey Mickael Barzalona and at four years of age, is already a dual Group 1 winner.
Held up in towards the rear, Hoggar De l’Ardus travelled with plenty of zest. Maxr (Jaffer Asf) took the field along through the early stages and set a good tempo. Favourite Ebraz (Amer) was ridden to his usual tactics and was help up in rear. The pace slackened on the turn for home and there were plenty of horses still travelling well. Lady Princess (General) looked like the winner as she kicked for home inside the final 400m. Hoggar De l’Ardus was switched towards the inside by Barzalona and stayed on strongly through the field. Inside the final 200m Lady Princess started to hang towards the inside. Running on strongly, Hoggar De L’Ardus battled hard and pulled himself to the lead in the finl strides and went on to win by a short head from Lady Princess. Last year’s winner Tayf (Amer) finished third.
Meanwhile, Ali Hamad al-Attiya owned filly Zellie (Wotton Bassett x Sarai) took the Qatar Prix Marcel Boussac - Criterium Des Pouliches (Group 1). Qatar Racing and Equestrian Club's Chairman Issa bin Mohamed al-Mohannadi.
Trained by Andre Fabre and ridden for the first time by Irish-born jockey Oisin Murphy, Zellie was having her sixth career. A winner of her first three races, where she carried the colours of Ms. Lavinia Fabre, Zellie was then purchased by her current owner before going on to finish second in a pair of Group Three races.
The Marc Chan-owned colt Angel Bleu (Dark Angel x Cercle De La Vie) prevailed with a strong determined run to win the Qatar Prix Jean-Luc Lagardere - Grand Criterium (Group 1). Hamad bin Abdulrahman al-Attiya, QREC Vice Chairman and President of the Asian and the Qatar Equestrian Federations presented the trophies to the winners.
Haras de la Gousserie’s Rougir (Territories x Summer Moon) secured a well-deserved top-flight success when landing the Prix de l’Opera Longines (Group 1). Trained by Cedric Rossi and ridden by Maxime Guyon, Rougir finished third in last season’s Qatar Prix Marcel Boussac (Group 1). This was a first Group 1 success for her trainer Cedric Rossi. Matthieu Baumgartner, Vice Chairman of Longines, presented the trophies to the winners.
The British-trained Space Blues, representing the Godolphin silks, flew to a convincing win in the Qatar Prix de la Forêt. The five-year-old, who trained by Charlie Appleby, floored his rivals in the final stages of this Group 1 prize in what has been incredible weekend of racing at ParisLongchamp. QREC Acting CEO Bader Mohamed al-Darwish presented the trophies to the winners.
Gary Devlin-owned A Case Of You (Hot Streak x Karjera) prevailed in the Qatar Prix de l’Abbaye (Gr.1) Irish trainer Ado McGuinness was landinhg his first Group 1 success, along with A Case Of You’s owner Gary Devlin. The four-year-old was given an excellent ride by his jockey Ronan Whelan.