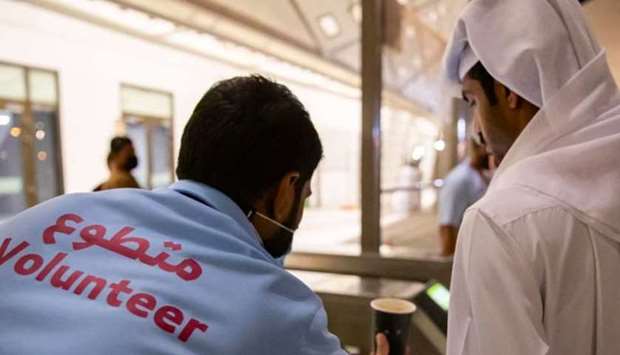 Volunteers supported 12 functional areas, including Fan ID distribution, spectator services, media and others. Most of the volunteers came from the Al Thumama area and were predominantly Arabic speakers. In total, 49 nationalities were represented among the volunteers, with participants coming from five continents.

Rasha Al Qarni, Workforce and Volunteer Director, Amir Cup 2021 Local Organising Committee, said: “Our volunteers played a vital role in delivering the successful inauguration of Al Thumama Stadium. Their enthusiasm and passion for supporting Qatar’s delivery of this event shone through yet again. I would like to thank each and every volunteer for their hard work and commitment.”

Al Qarni continued: “We look forward to working with more people during the upcoming FIFA Arab Cup that will witness the participation of around 5,000 volunteers, while continuing our preparations for the FIFA World Cup in just over a year’s time.”

During the inauguration, qatar2022.qa caught up with a selection of volunteers to discuss their experiences.

Qatari Habeeb Khalfan, 35, volunteered to support the media team during the match; a role which included photographing the volunteers in action. He spoke about the benefits of volunteering.

“I learned a lot and gained more self-confidence,” said Khalfan. “I encourage everyone to become a volunteer, as it’s a great experience and you learn a variety of skills in different fields.”

Khalfan, who works at Al Ahly Bank, continued: “I am very proud that Qatar will be the first Arab country to host a World Cup and I am honoured to be a part of the build-up to this event as a volunteer.”

Another Qatari volunteer, 25-year-old Hamad Mohammed Ali, is a public law student at Lusail University. He was part of the spectator services team during the Al Thumama inauguration.

“Through volunteering, I have learned organisational skills and how to give back to my country, which has given me everything I can ask for. I am proud to have been part of the Al Thumama inauguration and would encourage anyone to sign up to become a volunteer. It is a great opportunity to learn new skills and create new relationships and experiences.”

Irene Theodoropoulou, 39, from Greece, has lived in Qatar for 11 years and works as a linguistics professor at Qatar University. She helped fans get to their seats and answered any questions they had.

“I wanted to be part of the history that Qatar is making with football,” said Theodoropoulou. “The stadium is a jewel – I’m really impressed by it – and volunteering during the first match has been a great experience.”

Theodoropoulou continued: “Volunteering is a good opportunity to meet people from different walks of life. This was an eye-opening experience for me and helped me to become more flexible and adaptable. You have to be very patient as a volunteer – but it is a valuable experience and offers something different to your everyday routine.”

Indian national Belvin Benny Thomas, 19, has lived in Qatar since he was two years old. He helped fans scan their tickets as they entered the stadium.

“Being a volunteer is all about meeting new people, along with the experiences and exposure you get,” said Thomas. “I love football but normally we only see the matches – you don’t see what goes on behind the scenes. Now I have seen everything and appreciate the amount of work involved.”

Thomas added: “I would encourage anyone to volunteer, as it’s an amazing experience and will help you in different areas of your life. It’s also great to work as part of a team.”