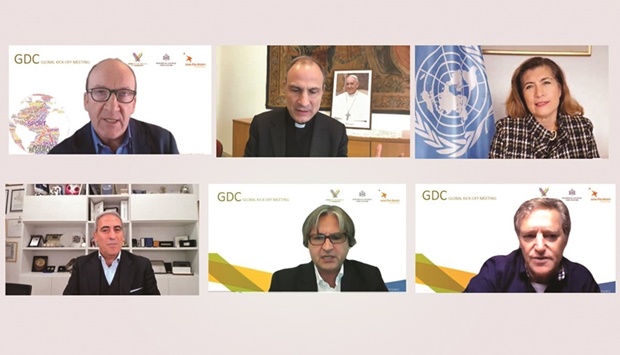 Under the aegis of the Vatican Pontifical Council for Culture, Sport at the Service of Humanity and Save the Dream, launched on Thursday the Global Digital Community (GDC), a joint initiative with the aim to serve as a global technology platform, to support the practice of inclusive sport and promotion of its educational and societal values in faith-based communities.
The launch took place through a virtual GDC kick-off meeting and working group sessions, bringing together experts from a range of institutions, international organisations, NGOs, representatives from the world of sport, religious institutions, grassroots initiatives, and the business sector, to undertake a wide-ranging mapping process, pooling knowledge, expertise, and networking potential to meet the needs of the community.
Initially for the benefit of over 60 million children across nations, namely the number of children reached by the eco-system comprised of parishes, orphanages, and schools already in place in the Catholic community, the GDC was conceived, from the outset, to take an inter-faith approach and to involve institutions representing other faiths and religions. Building on Pope Francis’ call during the 2016 First Global Conference on Faith and Sport to leverage the power of faith and sport to serve humanity, GDC has been established to support and empower local faith communities to use sport as a tool for the education of youth, social inclusion, and the promotion of healthy lifestyles.
Save the Dream and Sport for Humanity have identified a need and an opportunity to provide local faith communities with a global digital platform where they can access and learn from tools, best practices, case studies, and other resources to support their programmes using the practice of sport and exposure to its educational and societal values.
The event was opened by the GDC initiative partners along with its first benefactor, the Solow Art and Architecture Foundation who welcomed all participants. The meeting also featured keynote messages by Gabriela Ramos, Assistant Director General for Social and Human Sciences, United Nations Educational, Scientific and Cultural Organization (Unesco), Raffaele Chiulli, President, Association of IOC Recognised International Sports Federations (ARISF) and Lorenzo Bernardi, World Champion and Volleyball Player of the Century.
Fifty experts and practitioners from international organisations, sport bodies and civil society took part in five thematic sessions, including but not limited to Unesco, the International Labour Organization (ILO), the United Nations Office of Counter-Terrorism (UNOCT), United Nations Institute for Training and Research (UNITAR), European Education and Culture Executive Agency (EACEA), Sport and Dev, Peace and Sport, Harvard University Global Sports Initiative, Education Above All, Generation Amazing, Confederation of African Football (CAF), Confederation of North, Central America and Caribbean Association Football (Concacaf), Big East Conference, representatives of the Olympic Movement, Religions for Peace, Maccabi World Union, and the Pontifical Council for Interreligious Dialogue (PCID), to name a few.
Following the virtual kick-off meeting, GDC will hold a high-level meeting in Vatican City on December 14 involving a select group of supporters and philanthropists who will meet to review the initial recommendations and more importantly, discuss the required resources for the realisation of the initial objectives of the joint initiative.
“GDC was conceived as a platform to support the practice of sport and the exposure to its educational and societal values, initially to benefit over 60 million children within the Catholic community,” said Msgr. Melchor Sanchez, Undersecretary at the Pontifical Council for Culture.
“Importantly, the GDC’s intent is to have a multi-faith approach and the long-term vision is to include a higher number of beneficiaries through the involvement of other faith-based organisations and groups.”
“I believe that the main strength of this initiative lies in its simplicity, but at the same time, in its capacity to apply in the field the important policy frameworks developed at the international level, frameworks such as the Kazan Action Plan,” explained Massimiliano Montanari, CEO of Save the Dream. “It is also instrumental to put into practice Pope Francis’ call to action, when he urged all of us back in 2016 to bring a ball to the outskirts of the world, wherever these are. So, hopefully, in a few years, this ball will finally reach its destination,” he added.
“As our world continues to face unprecedented challenges, Sport for Humanity reinforces its commitment to using the power of faith and sport to transform attitudes and actions – now, more than ever,” said David Eades, Sport for Humanity Foundation Chairman.
“This work is important and the idea of being able to provide a central, user-friendly, global digital platform where tools, templates and resources can be accessed by sport and development practitioners, from different cultures and faiths in local communities worldwide, would be an absolute game changer.”