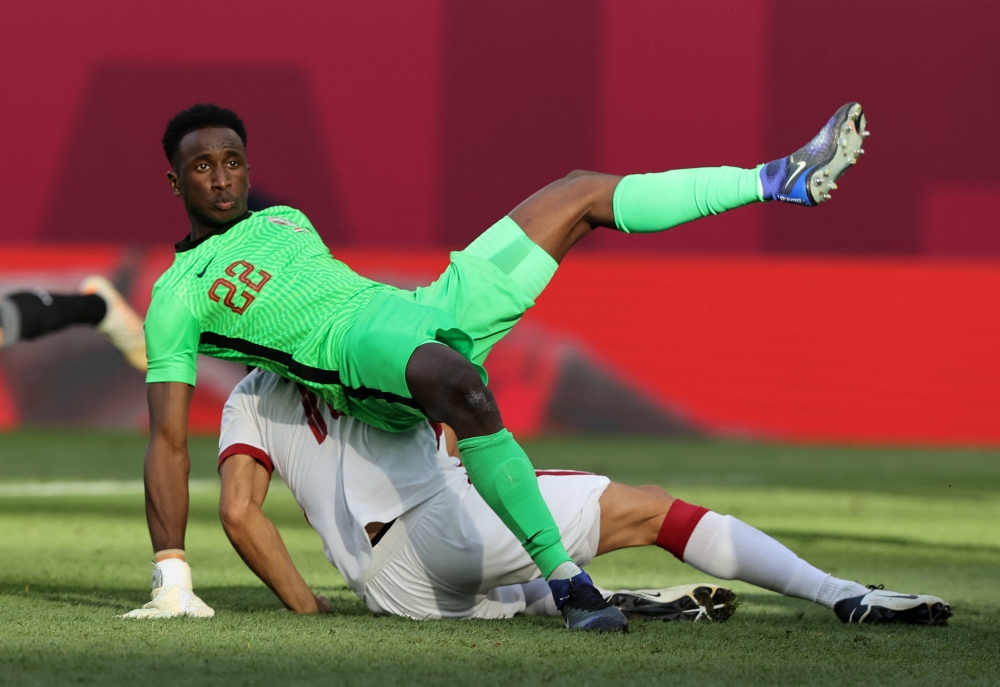 Doha, 18 December 2021 - Meshaal Basham’s heroics from the spot ensured Qatar beat Egypt 5-4 on penalties after a goalless 120 minutes at Stadium 974 to secure third place in the FIFA Arab Cup Qatar 2021.

Both teams had chances to win the game in regulation time, with Almoez Ali missing a glorious opportunity and Qatar’s goalkeeper producing a stunning Man of the Match performance. The Al Sadd youth graduate in his first match in the competition made several vital saves capped by a clutch performance in the shootout to seal Al Annabi’s place as the third-best team in the competition.

Captain Hassan al Haydos missed the first kick as Mohamed El Shenawy parried, but he was off his line before the kick was taken. The captain, however, blazed his second attempt wide off the left post. However, Ahmed Hegazy’s miss and Barsham’s save from Mohamed Sherif’s strike sent Stadium 974 into a frenzy.

“An indescribable feeling to get the third place,” the 23-year-old Barsham said after the match. “The victory did not come in vain; we made great efforts. We congratulate everyone on the occasion of the National Day.”

The Asian champions made a fast start to the third-place match as two of the youngest squads in the competition battled to finish the tournament on a high after disappointing late defeats in the semifinals.

Felix Sanchez made some changes to the startling line-up with Haydos on the bench, but the influential Akram Afif was at the heart of Qatar’s attack.

Homam Ahmed, who has grown into his role in the squad, once again justified his addition to Al Annabi’s defence with two back-to-back clearances as Egypt tried for the opener from a corner and a long-range effort.

Egypt’s Mohamed Sherif almost latched onto a loose back pass from Abdullah Alahrak, but Barsham was quickly off his line to sweep to safety.

Homan could have put Qatar ahead in the 15th minute, but the Al Gharafa defender somehow failed to connect after Mohammed Waad’s flick-on from a corner.

Afif tested Mohamed El Shenawy in goal, but his effort with his weaker left foot was easily gathered by the Pyramids shot-stopper. On the other end, Amr El Soulia’s shot flew wide as Egypt ended the half in search of the opener.

However, the second half started with Qatar’s best opportunity in the match, but the usually productive Almoez Ali had arguably the miss of the tournament. The Al Duhail man, just two goals shy of the national goalscoring record of 41, somehow sent an easy tap in high off the post after Boualem Khoukhi’s header across goal found him unmarked.

Egypt soon found their way into the game, and Hamdy Fathi tested Barsham from long range, but the goalkeeper parried as the ball took a deceptive bounce. Barsham showed strong hands to palm away Fathi’s goal-bound header just past the hour mark before Afif fired wide.

Egypt enjoyed more possession down the stretch, and Sherif could have won the game for Egypt after Fathi picked up a loose ball in the midfield and sent the striker on his way, but Barsham again held his nerve to punch out to safety.

Barsham produced another save in stoppage time, pushing away a low shot from Zizo as the game went to extra time.

Egypt created more chances in extra time, but Barsham stood up to the challenge saving from substitutes Mostafa Fathi and Akram Tawfik.

With several players down due to cramps, Egypt exploited the tired defense. Meshaal was again called into action with consecutive saves to deny Marwan Hamdy and Mostafa Fathi’s rebound effort as Qatar held on for penalties.

Also, midfielder Abdulaziz Hatem said, “Congratulations to everyone who participated and everyone who supported us. We wanted to win the Cup. We worked hard for it, but in the end, we were lucky to be in third place, and that’s a good thing.”

The Al Rayyan star noted that the team has grown in the last three years and will prepare well for the FIFA World Cup Qatar 2022.