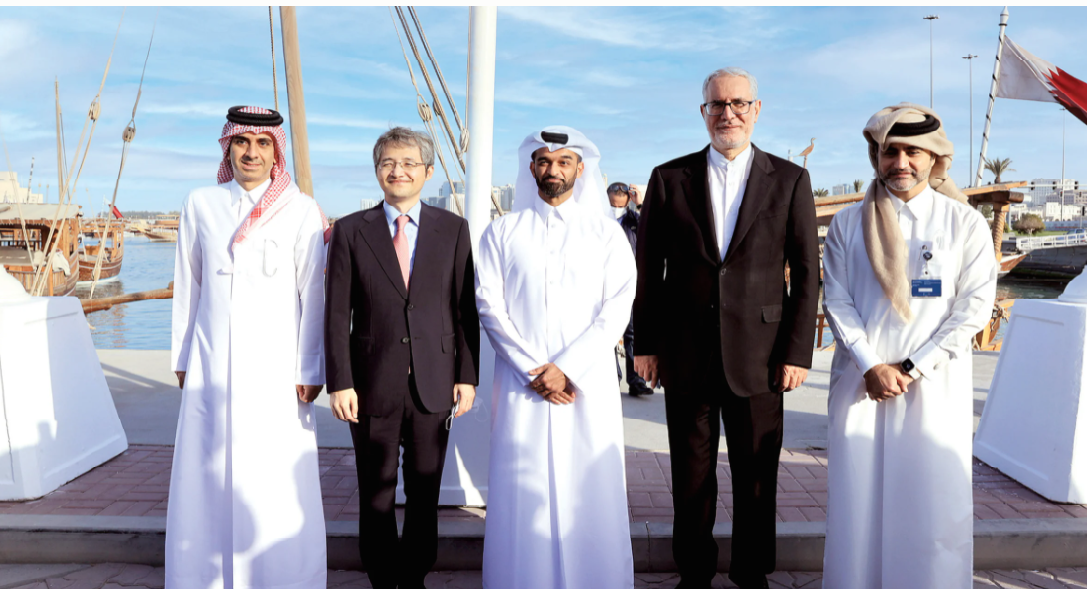 Doha, 4 February 2022 - Hassan Al Thawadi, Secretary-General of the Supreme Committee for Delivery and Legacy, welcomed South Korean and Iranian ambassadors after their national teams qualified for Qatar 2022, and as their flags were raised at Doha Corniche on Thursday.
The Supreme Committee for Delivery and Legacy (SC) and Local Organizing Committee had raised flags of earlier qualifiers and will carry out the flag hoisting initiative with all teams that will qualify for the FIFA 2022 World Cup.
Speaking at the ceremony, South Korean Ambassador to Qatar HE Joon-ho Lee said: “I am very pleased our national team have qualified for the 2022 World Cup in Qatar. This is our tenth successive World Cup qualification, we are the first in Asia to achieve this feat of ten qualification. Our team has so many distinguished players like Hung Son who is great performance in the English Premier League. So I am looking forward to our team’s practice here and many of the Korean football fans too.”
Iran’s Ambassador HE Hamidreza Dehghani, expressed delight at Team Mehli’s qualification as the first from Asia. “We are proud that the Iranian people once again are able to qualify for the global football event especially in our neighbouring country Qatar. I can’t say how happy and proud I am on this occasion.”
The ceremony was also attended by Khalid Ali Al Mawlawi, Deputy Director General, SC. He said, “Today, we celebrate the qualification of the first two Asian teams to the World Cup. This is not just a flag-raising ceremony but rather a sincere invitation from us as organising committee on behalf of Qatari people. Not only for these teams, but for their fans as well.
Meanwhile, the iconic National Museum of Qatar building was lit up with the flag of Korea Republic on Wednesday to celebrate their berth at the FIFA World Cup Qatar 2022 and a record appearance for the Taegeuk Warriors.
Iran and South Korea qualified with three and two games to spare, respectively, with 11 points separating second and third place in their Group A Asian World Cup qualification series. South Korea won its tenth World Cup in a row on Tuesday, defeating Syria 2-0 in Dubai. With a 1-0 victory over Iraq last Thursday, Iran became the first Asian team to qualify for the 2022 World Cup finals.
So far, Including the hosts, 15 teams have qualified for the 32-team World Cup so far: Qatar, Argentina, Belgium, Brazil, Croatia, Denmark, England, France, Germany, Iran, The Netherlands, Serbia, South Korea, Spain, Switzerland
The draw for the World Cup will take place in Qatar’s capital Doha on April 1.