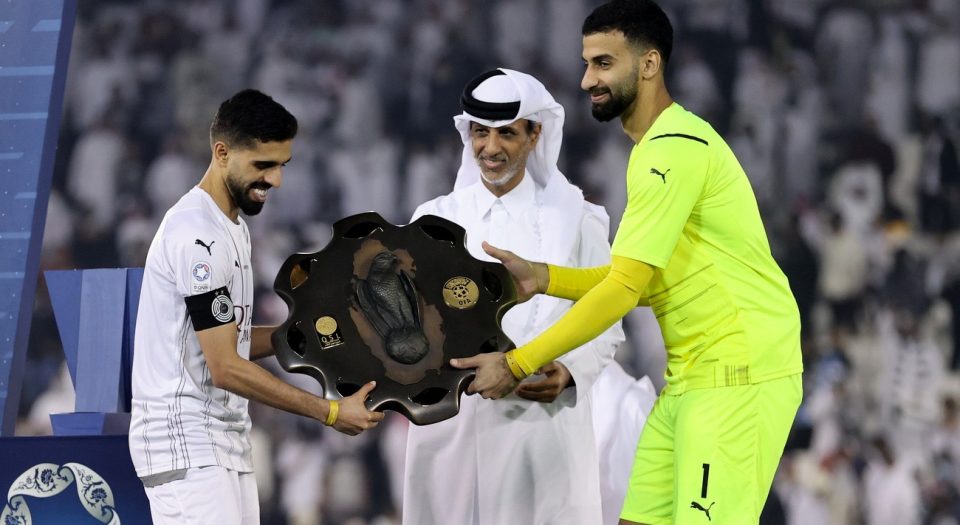 Doha, 26 February 2022 - His Excellency Sheikh Hamad bin Khalifa bin Ahmed Al Thani, President of Qatar Football Association and Qatar Stars League, crowned Al Sadd as the champions of 2021-2022 season QNB Stars League on Friday at the Jassim bin Hamad Stadium of Al Sadd Club at the end of their match against Al Duhail in Week 20, which finished in a 1-1 draw.

Al Sadd had officially won the league after their 8-2 victory over Al Ahli in Week 19 to retain the title.

Al Duhail’s Paulo Edmilson Junior scored from a penalty kick in the 38th minute and Akram Afif scored the equaliser for Al Sadd in the 59th minute.

Al Sadd thus raised their tally to 53 points, with a postponed match against Al Rayyan in hand, while Al Duhail climbed to 43 points in second place.

The match witnessed a remarkable gesture by Al Sadd, who honoured their former captain Abdullah Kone with whom they won the 2011 AFC Champions League.

The start of the match, which was attended by a large number of Al Sadd fans, was strong and exciting and the first minutes witnessed a strong clash between the players.

Santi Cazorla fired a powerful shot from the edge of the penalty area and it was saved by Al Duhail goalkeeper Salah Zakaria with difficulty.

The match became equal between the two teams and the game was mostly limited to the midfield.

Edmilson opened the scoring from a penalty kick, which was awarded through VAR decision after he was fouled by Al Sadd defender Boualem Khoukhi.

Al Sadd pressed hard at the beginning of second half and Andre Ayew almost scored the equaliser in the 51st minute.

The excitement between the two teams continued until Al Sadd managed to draw parity through Akram, who took advantage of Cazorla’s pass and beat the goalkeeper.

In the 80th minute, Al Duhail were awarded another penalty for an offence by Al Sadd defender Tarek Salman, but it was cancelled with VAR decision.