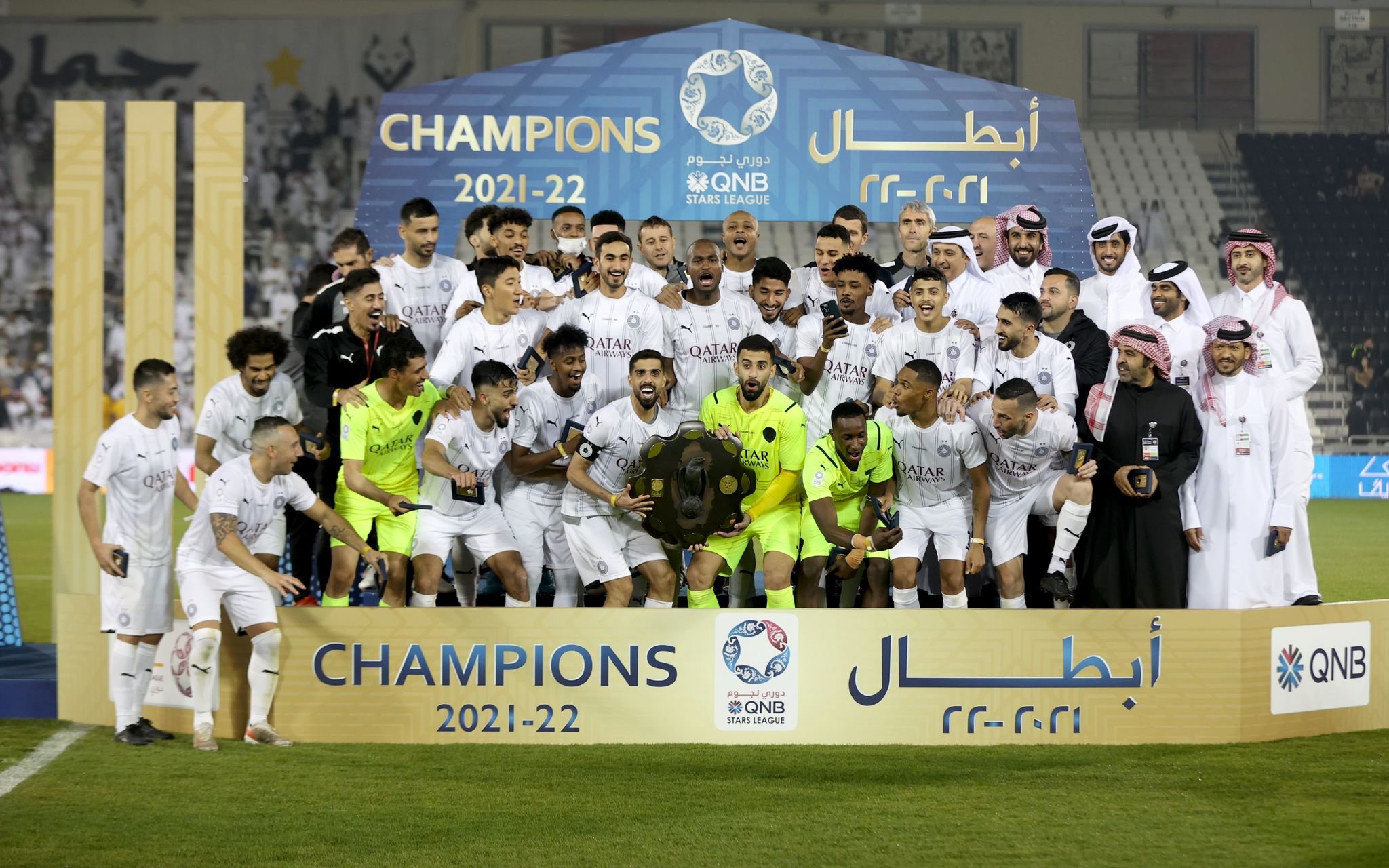 Doha, 26 February 2022 - A number of Al Sadd players and coach Javi Gracia spoke after winning the QNB Stars League shield for the 2021-2022 season, following their match against Al Duhail in Week 20 at the Jassim bin Hamad Stadium of Al Sadd club on Friday evening, 25th February, 2022.

Everyone expressed their happiness for winning the championship after great efforts throughout the journey. They expressed their thanks and appreciation to the club management, technical as well as administrative staff and the club’s fans.

Javi Gracia: Thank you everyone for this great achievement

Gracia expressed his great happiness on winning the QNB Stars League with the team. “I thank the players for the efforts they made throughout the season and also the technical, administrative and medical staff. Now is a very wonderful moment for the fans to share the joy of winning the league title and we would like to tell them that the players are still thirsty to achieve more. We’ll continue the same approach to win more titles.

“I had won a second-class title with one of the teams previously, but it does not match the feeling that I feel today, which is winning the QNB Stars League. These are special moments for me. Since my arrival, we have won many matches and presented great performances, and I can’ describe how I feel right now.”

Baghdad Bounedjah: Winning the league is one of the best moments

Ace Algerian striker Baghdad Bounedjah said league crowning is among the most beautiful moments because the player got rewarded for the efforts and toil throughout the season.

He congratulated team-mates, technical staff and the club management for this achievement, another great addition to Al Sadd’s trophy cabinet.

“Everyone contributed to this achievement, including the administrative, technical and medical staff, players and fans who stood by the team, and the fact is that winning the league has a different feeling. For anyone who makes great efforts for an achievement, it is natural to feel great happiness when he sees the result of his work and effort being in the first place.”

Hassan Al Haydous: This season was a big challenge for us

He said, “It’s a great joy and every team member is happy today after winning the league title. Praise be to God, this season we achieved it with three rounds to spare and also with our postponed match against Al Rayyan yet to play.

“Getting the league this season was a challenge for us and we, as players, were determined from the beginning of the season to retain the title. Obtaining the shield wasn’t an easy thing. We went into each match to win it and I think our results and statistics confirm we’re the best and deserved the championship.

“This season was long and hard, where we faced difficulties and challenges and overcame them. Praise be to God for the crowning and victory. We promise the fans more championships and the focus will be on the AFC Champions League and Amir Cup, and winning more titles.

Akram Afif: Winning the title is an effort that counts for everyone with Al Sadd

Al Sadd star Akram Afif said winning the league was the result of the efforts throughout the entire season, where the team presented a high level and broke records through the goals that were scored.

Praise be to God for winning our 16th league shield.

“We had competition from the rest of the teams, but we always demonstrated our ability and strength in all matches. It is a different season and has a special taste. When you win the league title, you feel that you have made a great achievement because this coronation is the reward for a whole season’s work.

“All thanks to my fellow players for their great efforts. It was a challenging season for us. Everyone worked hard and, in the end, everyone’s efforts got rewarded. We also thank former coach Xavi (Hernandez) and current coach Gracia, and his assistant and administrative staff.

Pedro Miguel: We’re proud of what we’ve achieved and look forward to more

Al Sadd player Pedro Miguel said, “We’re very happy with winning the shield deservedly and we look forward to more. We managed to achieve our goal of lifting the league shield and the players showed fighting spirit in all matches. There was a great desire by everyone to achieve the title.

“Without the desire and fighting spirit, the team can’t achieve this feat.

“We thank the Al Sadd fans for their presence and support for the team, and we are happy that we were able to make this huge crowd happy. We’ve the motivation to do the best in the remaining tournaments this season.

“We played big and strong matches until the title was decided in the Al Ahli match in Week 19. It was followed by the coronation after the Al Duhail game in Week 20. The fans played a major role by supporting the team.

“From the beginning of the season, we were thinking about winning the title. We knew how to play in all matches and do what was required to win the shield, which will be an additional motivation for us for more achievements in future.

Abdelkarim Hassan: I congratulate Al Sadd management and all fans

Abdelkarim Hassan expressed his great happiness on winning the league shield for the second season in a row.

“We congratulate the Al Sadd management and all fans on this achievement. Our fans deserved it for coming to the stadium and supporting the team.

“All our focus from the beginning was on winning the shield and the team played in a high spirit and exhibited teamwork. This was what we sought because we knew the strength of the opponents who have standout players capable of making the difference.

“We also have important upcoming challenges ahead, locally and at the Asian level, and all players rose up to expectations during the season. It was a collective effort on the part of everyone.”