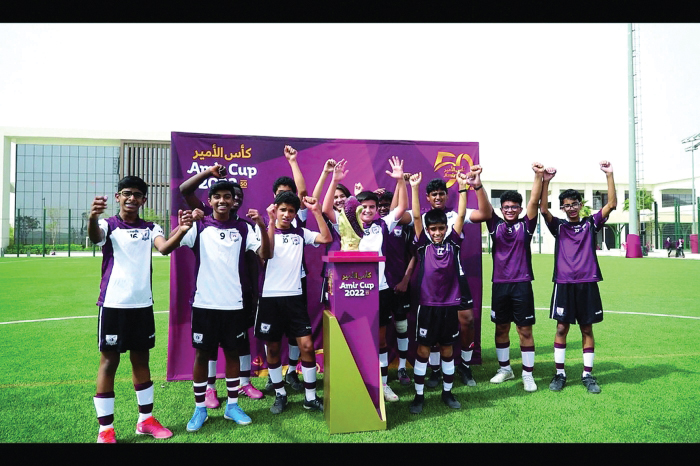 Doha, 8 March 2022 - Qatar Airways (QA), the Official Airline Sponsor of Qatar Football Association (QFA), organised a special match for students at the Oryx International School (OIS) ahead of the upcoming 50th Amir Cup final.
With teachers and media in attendance, students were able to experience the thrill of the prestigious 50th Amir Cup final ahead of the event, which will take place at Khalifa International Stadium on Friday March 18.
Qatar Airways Group Chief Executive Akbar Al Baker said, “One of our key missions at Qatar Airways is to bring our communities together through sport. Our longstanding partnership with Qatar Football Association gives us both the opportunity to inspire the youth to take up sport, while paying homage to Qatar’s highest profile football cup competition.
“Today, the children experienced what it feels like to be a champion with the celebrated Amir Cup trophy. We hope this initiative further nurtures key values, including discipline, team-work, perseverance and respect, among the students at Oryx International School.”
Oryx International School Executive Principal Derek Laidlaw said, “We are delighted to be part of this historic 50th anniversary of the Amir Cup and to support the QFA and sport in Qatar. The children were thrilled to take part in this event and are always ready to demonstrate their skills.”
OIS is an independent educational institution exclusively for the children of employees of the Qatar Airways Group. The state-of-the-art school was initially located near the airline’s headquarters in Old Airport area, and has operated in partnership with Orbital Education since 2016.
The school then inaugurated its new Mesaimeer campus in September 2018.
The Amir Cup is an annual knockout competition featuring teams from the first and second divisions of domestic football in Qatar. In November 2021, Qatar Airways signed a partnership extension with QFA, making it the Official Airline Sponsor of the national team - the 2019 AFC Asian Cup champions.