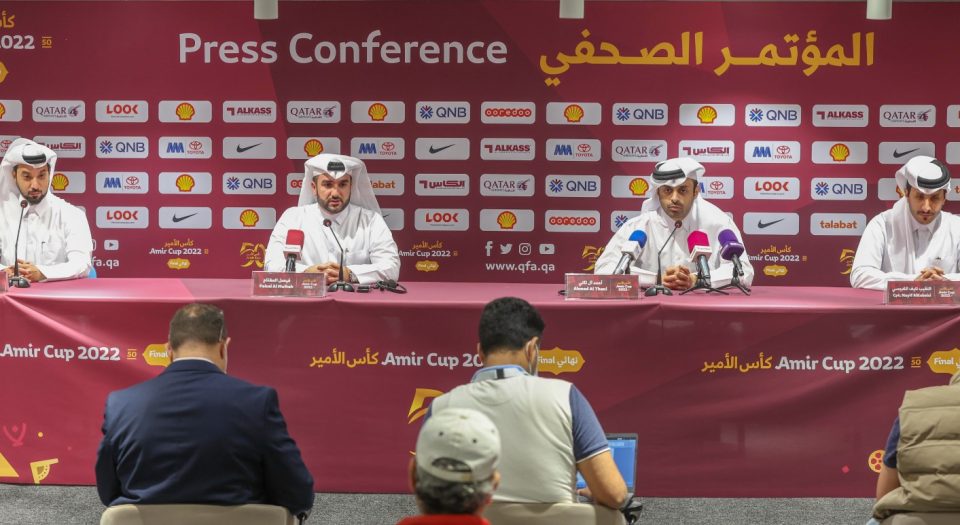 Doha, 16 March 2022 - The Qatar Football Association (QFA) held a press conference . It announced the arrangements regarding the staging of the final of the Amir Cup 2022 between Al Gharafa and Al Duhail.

Ali Al-Salat, the spokesman for the Marketing and Communications Department of the QFA, opened the press conference and offered his congratulations to the two finalists, Al Gharafa and Al Duhail.

Captain Nayef Ghanem Al Kubaisi, commander of the security operations, said: “Our tasks include securing and facilitating access to the stadium and the area surrounding the Khalifa International Stadium before and after the final of the Emir Cup 2022 and ensuring easy access for the public in the best possible way. We also have to provide the necessary instructions in the area to ensure the smooth use of the roads leading to the stadium and to ensure the comfort of the fans.”

Sheikh Ahmed Al Thani, director of the Khalifa Stadium, said: “There is no doubt that the safety and security of the fans is one of our top priorities, so the necessary arrangements have been made in coordination with the competent authorities to facilitate procedures for the fans. The stadium doors will be open from four in the afternoon, and the match will start at 7 pm, and as usual,  fans should arrive early.”

Faisal Al-Muftah, Director of Transport Operations, said: “Preparations for the Amir Cup final have been made with great interest in preparation for the final match on the 18th of this month, where there will be more than one way to reach Khalifa Stadium through public transportation and the metro at a rate of every two and a half minutes. Parking spaces will be available with a capacity of 11,000 cars.”

For his part, Ali Al-Salat explained that ticket sales for the final match reached 65%. He pointed out that ticket prices are 50 riyals and 10 riyals, and they are available on club websites from four o’clock to 10 pm. He said fans can also QFA’s media channels for more information.