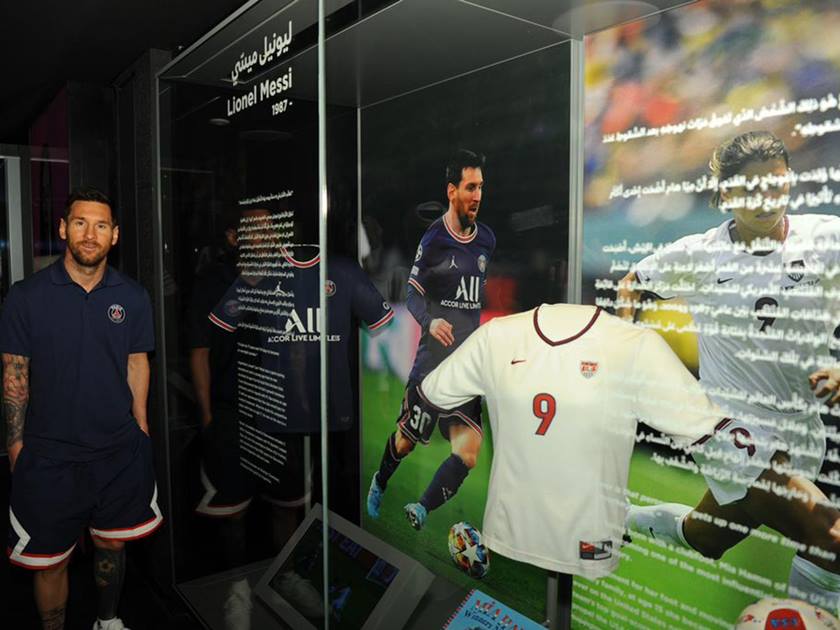 Doha, 17 May 2022 - The French Football League crowned Paris Saint-Germain team concluded its promotional tour in Qatar, which included many activities and events with the club's sponsors, including a visit to the Education City Stadium, which will host the FIFA World Cup Qatar 2022.

A number of the French team's stars visited the World Cup stadium in the presence of former English football star David Beckham, in addition to the club's academy in Doha, which was established as a result of a partnership between the club and Qatar Foundation, where many fans were keen to take pictures with the stars.

Over 100 children gathered at Awsaj Academy part of Qatar Foundations Pre-University Education, the session saw the players speak about everything from when they started playing football to how it feels to be global stars and what it takes to be a top player, before taking pictures with the young fans and signing autographs.

The players were also given an overview of QFs programs and initiatives in the fields of education, science and research, and community development during their time at Education City, which included a balcony tour at the 2015 building (QF Headquarters). The PSG Academy in Qatar has been established through a partnership between the club and QF.

The team moved to the Aspire Academy during which they met the students of the Academy and conducted a skills challenge and an exhibition match.

The French team was also keen to be present in the Qatar Olympic and Sports Museum, one of the most innovative and technologically advanced museums dedicated to sports in the world and the largest in terms of space.

The players toured the museums wings and got acquainted with the most prominent corners of the museum, especially the exhibition hall, which includes nearly 100 original collectibles and copies, dating from the eighth century BC to the early twentieth century, accompanied by graphics, audio-visual and interactive digital elements.

The French club delegation left back towards the French capital, Paris, to prepare for the final confrontation within the thirty-eighth and final round of the French League against Metz Club at the Parc des Princes, where the team will receive the French League shield.

The Paris Saint-Germain delegation landed in Doha on Sunday morning, May 15, 2022, as part of its promotional tour in Qatar, this is the first visit to the French capital club since 2019, as it was the last visit within its winter camp, after which the Corona (Covid-19) pandemic canceled many promotional tours that the management of Paris Saint-Germain had planned to make to the capital, Doha.