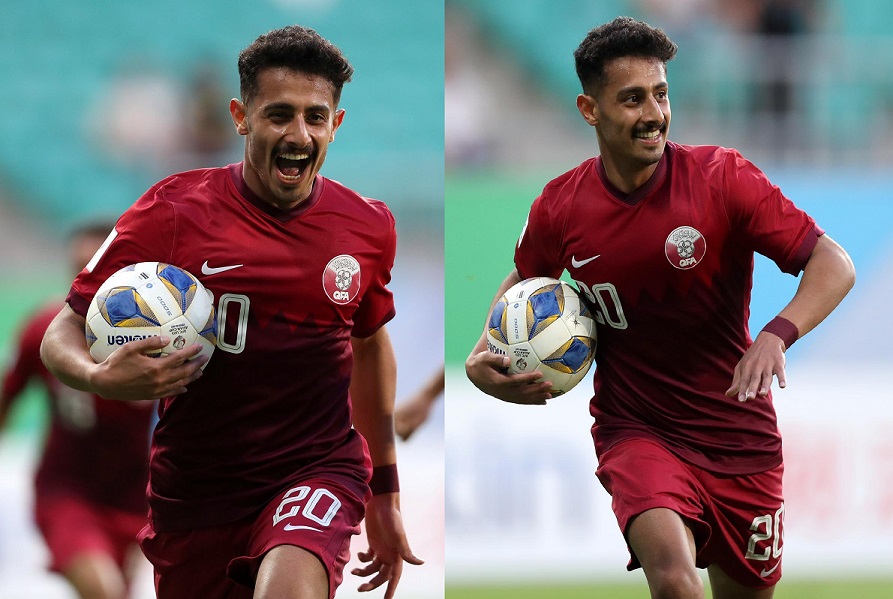 Tashkent, 2 June 2022 - Qatar and Iran settled for a 1-1 draw following late drama in Group A of the AFC U23 Asian Cup Uzbekistan 2022 at the Bunyodkor Stadium yesterday.

Qatar looked to have sealed the points through Ahmed Al Ganehi’s 87th minute effort, only for Erfan Shahriari to salvage a point for Iran with his strike in stoppage time.

Determined to redeem themselves after their group stage exit in 2020, Qatar were the first to have a sight on goal when Osamah Al Tairi beat the offside trap in the third minute, before pulling back for Moustafa Tarek who, however, struck directly at goalkeeper Parsa Jafari.

Iran, who had scored nine goals in the Qualifiers, responded immediately with captain Yasin Salmani collecting Ahmad Shariatzadeh’s through ball into the box before beating two defenders only to see his shot deflect off Ahmed Suhail’s back heel.

That was to be the turning point as Team Melli Omid controlled possession and had a handful of opportunities through crosses into the area, but Salmani and Shariatzadeh were unable to lay the finishing touch.

Qatar’s best chances of the opening half came through corner kicks, none more so than in the 43rd minute when Hashim Ali was left unmarked near the post but failed to keep his volley on target as both sides went into the halftime break level.

Shahriari, who replaced Arya Yousefi at the start of the second half, came close to connecting to Mohammad Khodabandelho’s chipped effort into the box six minutes in before heading wide moments later.

While Qatar were pegged back in their own half for the most part, the young Maroons had a chance in the 62nd minute following a swift counter-attacking move with Yusuf Abdurisag threatening the Iranian back-line, but his twist-and-turn effort lacked precision.

In an effort to bolster their midfield presence, Qatar head coach Nicolas Cordova sent on Al Ganehi and Andri Syahputra in the 72nd minute, which proved successful in not only pushing the Iranians back but also paving the way for the opening goal with Al Ganehi collecting Tarek’s pass in the box and slotting past Jafari in the 87th minute.

However, Qatar’s celebration only lasted three minutes as an unmanned Shahriari latched onto a stray ball in the box, before slamming home from close range.

Iran will face fellow Turkmenistan next on Saturday, while Qatar take on Uzbekistan in the day’s later kick-off at the Pakhtakor Stadium in Tashkent.