‘Tunisian fans will bring passion and excitement to the stands’ 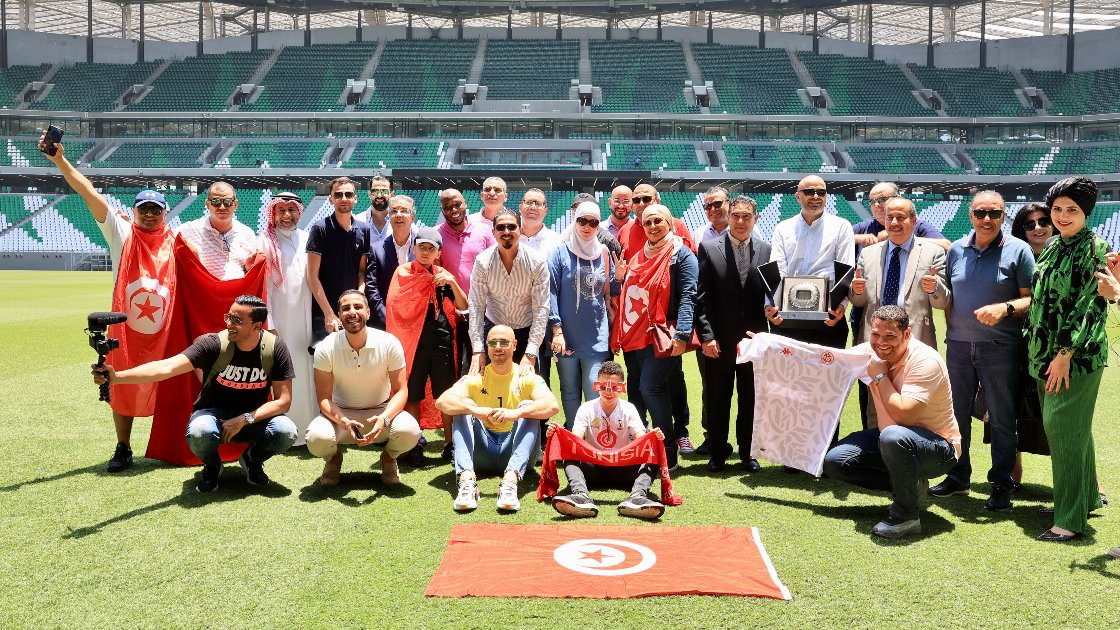 Doha, 8 June 2022 - For Tunisian fans, qualifying for the Middle East and Arab world’s first FIFA World Cup™ holds special significance. Thousands will journey to Qatar for the tournament – bringing colour and passion to the stands – as their nation aims to make history at the 22nd hosting of the event.

“We will be among our own people, among our own family in Qatar. Not only is there a sizeable Tunisian community in Qatar already, but many fans will come for the tournament to cheer on the Tunisian national team, while also supporting all Arab teams and celebrating this momentous achievement by Qatar,” said Nehru Al Arabi, the Tunisian Ambassador to Qatar.

The Eagles of Carthage will be making their sixth appearance at a FIFA World Cup™. In 1978, they became the first African and Arab team to win a match at the tournament after defeating Mexico 3-1 in the group stage. Starting in midfield that afternoon was Tarek Dhiab, a dynamic playmaker who is regarded as one of Tunisia’s best players in history. Now a popular TV pundit, Dhiab can’t wait for Qatar 2022.

“Every player dreams of playing in the World Cup, but having the privilege to play in this edition of the tournament is even more special for Tunisians as it’s the first in an Arab country. I really hope the players step up for this momentous occasion,” said Dhiab.

“When we played in Argentina in the 1978 World Cup, we had no support in the stands. We were playing alone. But now, here in Qatar, we will have tens of thousands of fans cheering on Tunisia. It will be like playing at home and that should give the players a tremendous boost,” he added.

Tunisia have been drawn into Group D alongside reigning champions France, Denmark and the winner of the inter-continental play-off between Peru and Australia. The Tunisians will kick off their World Cup campaign on Tuesday 22 November at Education City Stadium against Denmark.

A group of Tunisian fans and community leaders were recently invited by the Supreme Committee for Delivery & Legacy (SC) to visit Education City Stadium and get a closer look at the 40,000-capacity venue. Ayman Sassi, a Tunisian fan leader based in Qatar, led the visit and told the SC about the various initiatives being planned to unite the community.

“Through the fan leader programme, we are able to connect with our fan base, here in Qatar and around the world, to provide them with all the necessary information ahead of the tournament and with support while they are here. Tunisian supporters will have a big impact on the tournament, and will bring a lot of passion and excitement to the stands. We want to make sure that our players get all the support they deserve,” said Sassi.

“For Tunisians living abroad, our national team is something we hold close to our hearts. It is much more than a football team to us,” added Sassi.

Although the Tunisians have participated in five previous FIFA World Cup™ tournaments, they have failed to make it past the group stage in each edition – something they want to change this time around. One player who represented Tunisia at three previous tournaments is Hatem Trabelsi, a dynamic right-back who played for Ajax and Manchester City. For him, this tournament can be a pivotal moment for the progression of the Tunisian team – a side that boasts a large crop of exciting young players.

“Our players may not get the chance to win the tournament – so simply qualifying is an achievement in its own right. This is an experience the players will celebrate for the rest of their lives. Representing your country on the world stage is an honour that will outlive players and be talked about long after they’re gone,” said Trabelsi.