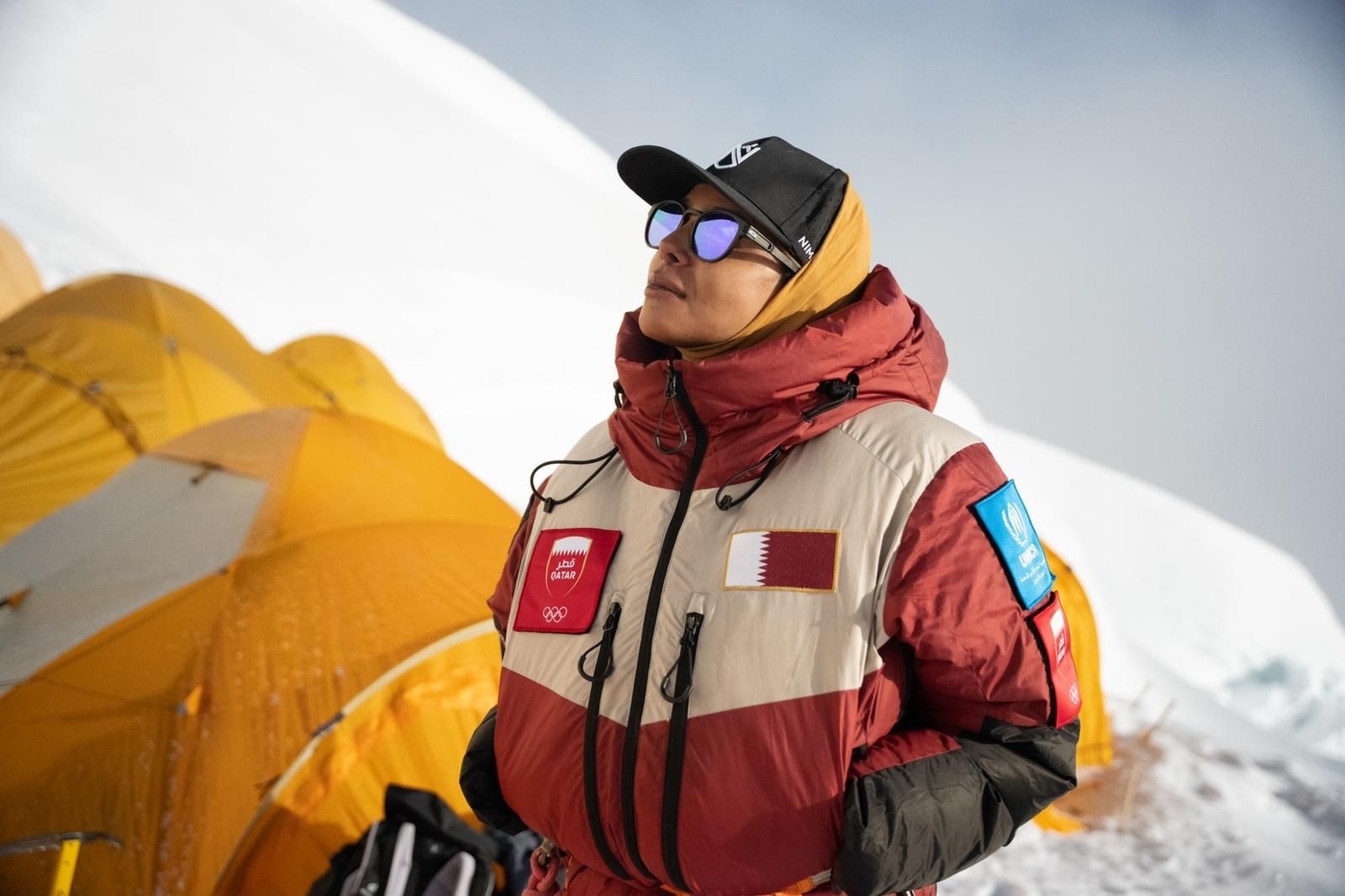 Doha, 26 July 2022 - Sheikha Asma Al-Thani has continued to shatter records in her ground-breaking Beyond Boundaries journey to inspire others to unlock their own potential, as her latest K2 ascent adds to a growing tally of historic achievements during the current mountaineering season.
Beyond Boundaries is Sheikha Asmas journey to complete the Explorers Grand Slam and summit the worlds 14 eight-thousanders in the Himalayan and Karakoram mountain ranges. By undertaking this ground-breaking challenge and sharing her journey, Sheikha Asma aims to inspire others while championing womens empowerment and building bridges between communities.
"Beyond Boundaries is more than just climbing mountains. Its about inspiring others and showing how the impossible is possible if you move forward with conviction and passion. I hope that women and young people across the Middle East and beyond will see how dreams can be achieved through hard work and determination," said Sheikha Asma Al-Thani.
Having become the first Qatari to ski the North Pole, and first Qatari woman to reach the South Pole, in addition to climbing six of the worlds Seven Summits, Sheikha Asma is now only one mountain away (Puncak Jaya) from realizing the Explorers Grand Slam. She is the first Arab woman to have reached this stage, and many more records have already been broken along the way.
These records include becoming the only Arab to have climbed six of the worlds 8000m peaks, as well as the first Arab to have climbed Kanchenjunga and Dhaulagiri. Sheikha Asma is also the first Arab to summit three 8,000m peaks within one month, and the first woman in the world to climb the true summit of Manaslu without oxygen.
Meanwhile, Sheikha Asma is also the first Qatari woman to have summitted the following mountains: Everest, Lhotse, K2, Manaslu, Dhaulagiri and Kanchenjunga. In a series of firsts, she also carried the official match ball of the Qatar 2022 FIFA World Cup, Al Rihla, on her ascent, marking the first time a World Cup match ball has reached the summit of Everest.
Sheikha Asma is also partnered with the UN Refugee Agency (UNHCR) as a high-profile supporter, and she is using her journey to raise awareness of the plight of refugees and forcibly displaced people globally. This season, she has raised the UNHCR flag atop some of the worlds highest mountains for the first time in history, including: Everest, Lhotse, Kanchenjunga, Vinson and K2.
"I am truly honored to have my name in the history books, but I am climbing for something so much bigger than me, I am climbing for the tens of millions of refugees and forcibly displaced people around the world. The challenges they face are far greater than my own, but I hope that by raising the UNHCR flag on top of mountains I can help raise awareness and advocate for the rights of those forced to flee due to conflict and persecution," Sheikha Asma Said.
"I would also like to thank the incredible team behind me and Elite Exped, particularly Nims Dai, Mingma David Sherpa, Mingma Tenzi Sherpa and all the Elite Exped guides for making this journey possible. I couldnt have done this without their support and guidance every step of the way." Sheikha Asma Added.
33-year-old Sheikha Asma Al-Thani is on a journey to become the first Qatari woman to complete the Explorers Grand Slam (climbing the Seven Summits and reaching the North Pole and South Pole) and climb the worlds 14 highest peaks.
Sheikha Asma is a major advocate of female empowerment in the Middle East and has significant influence within the Qatari, regional and international sports world. As a senior female official in the Qatar Olympic Committee, she is heavily involved in, and a key driving force behind, major Qatari sports projects.
Beyond Boundaries is Sheikha Asmas journey to go where few have gone before in the harshest of environments to champion womens empowerment and inspire others to unlock their potential. Sheikha Asma also aims to shed light on the importance of being a responsible global citizen, building bridges between communities and leaving a positive impact on our planet.