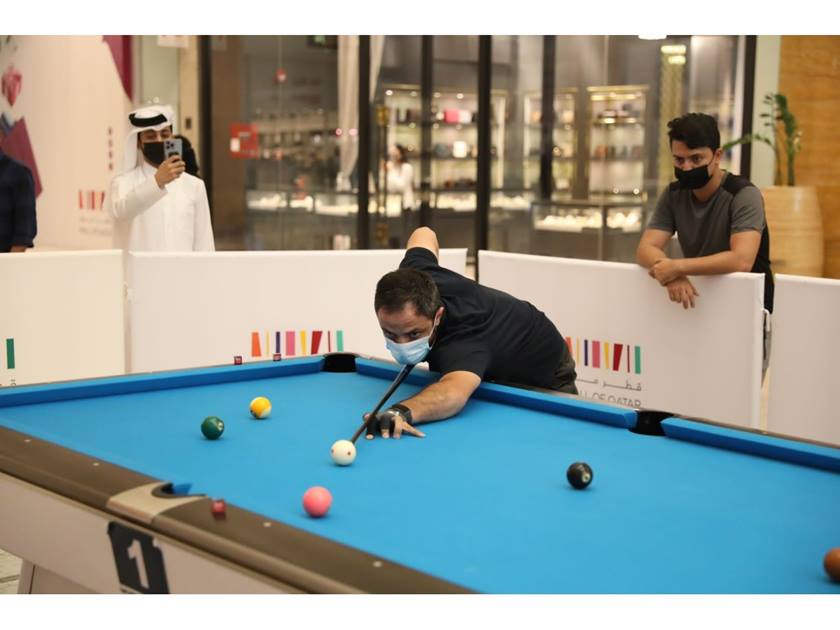 Doha, 2 August 2022 - Qatar Sports for All Federation (QSAF) wrapped up the second edition of the billiards local tournament that was held at the Mall of Qatar in collaboration with the Qatar Billiards & Snooker Federation (QBSF).
Mohamed Ahmed Nasser Al Yafei came first after defeating Tarek Ibrahim in the final match, and Mohamed Nasser Al Haddad captured third place after winning the third-place playoff against Ahmed Suleiman.
The tournament saw wide participation from billiard players as well as a large turnout of fans with the championship being held at a mall for the first time.
Following the final game, the Manager of Activities and Events at the QSAF Abdullah Al Dossary and QBSF member Yaqub Fakhro handed over medals and financial awards to the winners.
Al Dossary said he was delighted for the success the tournament achieved in terms of wide turnout and big participation from Qatar Mall goers, particularly children, adding the championship was not only competitive but educational as well to spread the game among the mall goers, especially children to make them practice the game themselves as well as being educated about principles and basics of the game under the supervision of specialized trainers.
He thanked the Mall of Qatar management for backing the tournament since beginning and providing all prerequisites for success. He added the tournament saw a big turnout due to the great popularity of billiards in Qatar as well as the QBSF's great endeavors to disseminate the game through holding a slew of international, continental, Arab and Gulf championships.
The QSAF is keen on organizing various championships and sports activities to fulfill the individuals of the Qatari society and urge them to do sports regularly a lifestyle coping with the QSAF's agenda and targets that paved the way for the biggest almanac for 2022 containing 575 tournaments, activities and sports events, said Al Dossary.
QBSF member Yaqub Fakhro commended the QSAF for holding the championship and hailed the Qatar Mall Administration for hosting it allowing spreading the game among the mall goers, seniors and juniors, and educating them about its laws and tactics.
Earlier, the QSAF announced it would hold 124 sports activities within the framework of the summer activity program which runs until Aug. 12 to promote sports as a lifestyle.