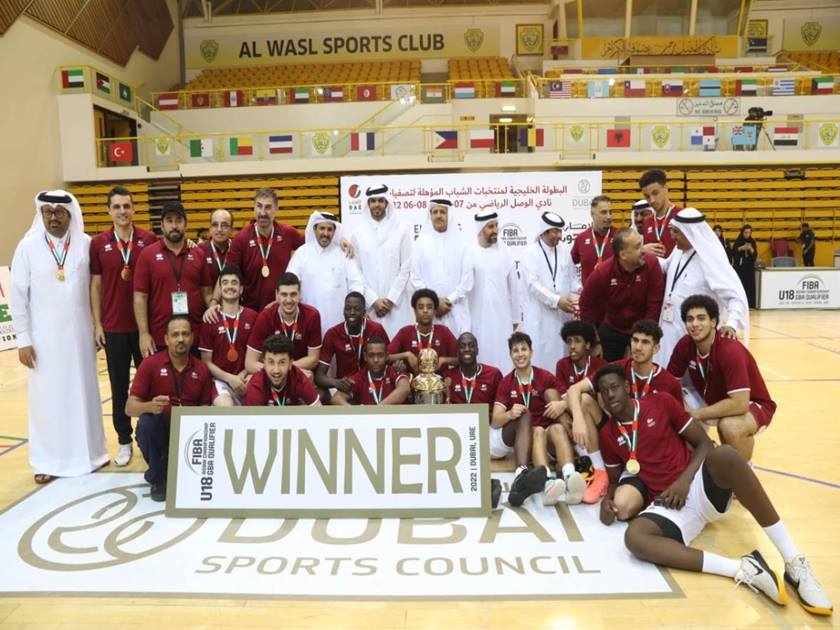 Dubai, 7 August 2022- The Qatari team won the GCC Mens U18 Basketball Championship, which was hosted by the United Arab Emirates at Al Wasl Sports Club in Dubai, after defeating its Saudi counterpart (75-51) in the final match.

Both teams showed strong performances, however it was the Qatari team who dominated the decisive moments of the first half, and after having increased the difference between both teams scores, the Qatari team entered the second half with ease, and only had to maintain this difference throughout in order to achieve victory.

Moreover, Qatars players starred in counter attacks and three-pointers, with more than one player getting under the spot light due to their impressive playing, especially in crucial moments through which the team maintained a comfortable lead of points, such as Mohammed Hashem, Hamad Yassin and Mohammed Nadu, who competed for the title of best player in the match, but with the title going to Sultan Abu Issa instead, who excelled in attacks, scoring 12 points, as well as in defense thwarting several attacks, achieving the best in follow-up.

The Qatari team deservedly won the championship after winning all seven matches it played throughout the tournament. In the group stage, it won five consecutive victories over Kuwait (64-51) in the first round, and the UAE (61-45) in the second round, Bahrain (63 - 47) in the third round, Saudi Arabia (79 - 55) in the fourth round, and Oman (82 - 32) in the fifth and final round.

Moreover, Qatar qualified for the semi-finals after taking first place in the general standings of the group, to face off Bahrain, who finished fourth in the group. However the Qatari team continued its conquest achieving victory over Bahrain with a score of (85-48), to finally qualified for the final match.

In the match to determine the third place, the Bahraini team managed to beat its Kuwaiti counterpart (55-45), by 10 points.

President of the Qatar Basketball Federation  Mohammed Saad Al Mughaiseeb expressed his joy for the national team’s winning of the GCC Men’s U18 Basketball Championship, and qualifying for the FIBA U18 Asian Championship end of this month.

In a press statement following the winning Al Mughaiseeb said that the Qatar team deserved being crown Champion of the GCC cup, due to its winning of all of its rounds with very good scores, as well as presenting high skilled performances demonstrating its deserving through the championship.

He added that the winning of the GCC Youth Championship title is the child of the cooperation between everyone in the basketball family, and the recent advancements in the various teams, which was evident when the youth team achieved the bronze of the Arab championship that was held in Egypt weeks ago.

For his part the Federation’s General-Secretary Saadoun Sabah Al Kuwari remarked the Qatari team players’ distinctive performance during all of the championship’s rounds, congratulating the players for their great achievement, as well as to all who associate with Qatari Basketball.

Al Kuwari considered that the team succeeded in providing high levels after benefiting greatly from its recent participation in the Arab championship obtaining the bronze medal.

The Secretary-General also stressed that the federation expects more achievements during the coming period, specifically in the Asian championship, which will start on the twenty-first of this month, pointing out that the team will receive a negative rest after returning from Dubai, after which preparations for the Asian Championship will begin.

On the other hand, the Assistance Secretary-General Nasser Ajlan Al Kaabi praised the distinguished playing of the Qatari team players as well as their technical and administrative staff in the GCC championship, thanking the players for their performance in the tournament, and hoping that they continue with the same effort and spirit during the Asian championship.