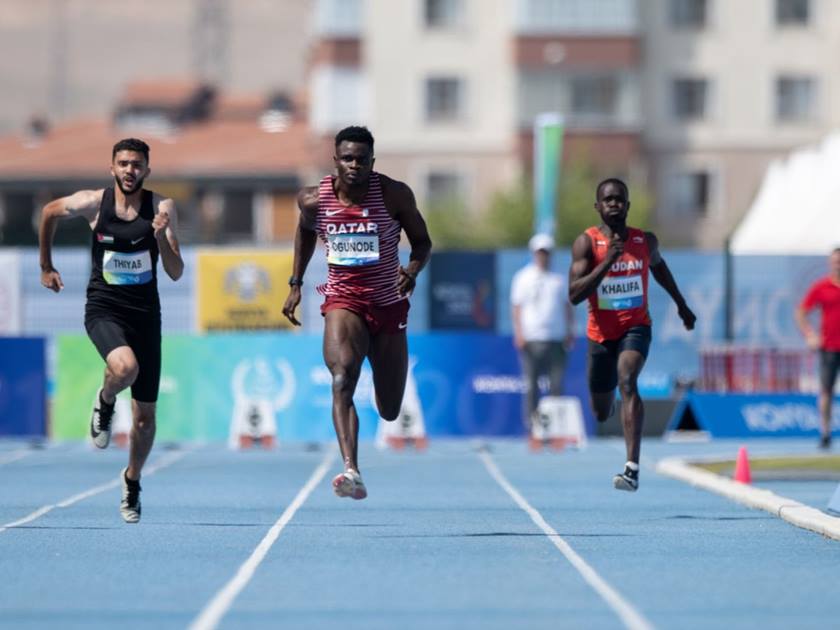 Konya /Turkey, 9 August 2022 - The Qatari teams made a strong start within their participation in the competitions of the 5th Islamic Solidarity Games, which will officially start in Konya, Turkey, Tuesday and continue until August 18.
In the athletics competitions, Tosin Ogunode, the Qatari player, qualified for the final round in the 100-meter race, after coming in first place in the qualifying race with a time of 9:98 seconds.
Another Qatari player, Bassem Hemeida, qualified for the final round in the 400-meter hurdles, after coming in first place in the qualifying race with a time of 49:70 seconds.
The Qatari player, Samar Mansouri, came fifth in the pole vault final, while Mohamad Algarni could not complete the 5000-meter race because of the injury he sustained during the competition.
On the other hand, Qatar handball team defeated its Moroccan counterpart, 22-20, today at the "Selcuklu" hall, in the first group competitions.
The competitions continue Tuesday with Qatari participation, as Saeed Alabsi and Omar Abkar compete in the 110-meter hurdles, Tosin Ogunode competes in the 100-meter final, Bassem Hemeida competes in the 400-meter hurdles final, and Ammar Ibrahim competes in the 400-meter semi-final.
Tuesday will also witness the first participation of the Qatari taekwondo team, with the participation of Abdulqader Asfoor, in the 58-kg weight category, Selcuk University 19 May Sports Hall.
For its part, Qatar volleyball team will start its matches tomorrow in the Islamic Solidarity Games by facing its Iranian counterpart, at the Karatay Congress and Sport Center, after finishing its preparations on Monday for this match.
The Qatar national team seeks to win its first official match in this tournament, especially as it is one of the strong candidates for the gold medal in the tournament.
On the other hand, Qatar women's team in 3x3 basketball, swimming, basketball, fencing and judo, arrived Monday to participate in the competitions, where exciting confrontations await them, given the strength of the competitions and the number of participating countries that target the first places.