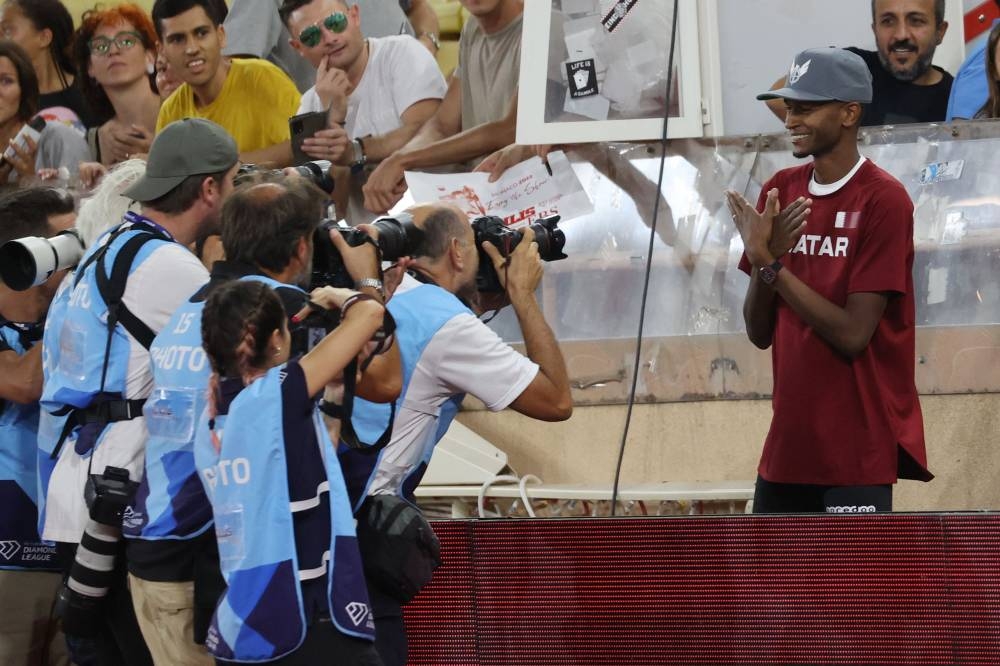 Monaco, 11 August 2022 - Qatar’s sterling high jump star Mutaz Essa Barshim won the Wanda Diamond League Meeting in Monaco. The three-time world champion and also Olympic gold medalist cleared 2.30m to triumph in a thrilling battle against world championship silver medallist Woo Sanghyeok of South Korea.Being the last men standing after the rest of the field failed in their respective attempts to go beyond 2.25m, both Barshim and Sanghyeok failed at 2.32m after clearing 2.30m. Then the bar was lowered once again to 2.30m as the Qatari star prevailed by clearing in his first attempt while the South Korean failed, giving the reigning world champion the victory at the Stade Louis II stadium.“I feel good about the winning, however I think I feel a bit tired because of the last couple of weeks with a lot of travels and fast moving, I think I need to rest and to have a good recovery,” he said later.“Today was like a marathon with too many jumps. I’m tired. I need to recover well now but it’s fun, it’s always fun to fight among the best. It’s really hard to stay focus all the time it’s a challenge but it is part of the sport and you need to take that challenge. For this competition my goal was to win and I did it,” Barshim added.The Qatari superstar said he will return home to train and improve his shortcomings. “Now we will look at the videos with my coach and see what are the technical aspects to improve for the next competition. This season was a bit special because it was rythmed with ups and downs so it was not easy but you know the most difficult the season is, the win tastes better. My goal until the end of the season is to keep winning,” Barshim added.Meanwhile, Shelly-Ann Fraser-Pryce and Noah Lyles underlined their dominant sprint seasons with victories at the Monaco Diamond League, as Faith Kipyegon narrowly missed a sensational world record in the 1500m. Jamaica’s Fraser-Pryce, fresh from a fifth world 100m title in Eugene last month, clocked a world leading 10.62 seconds for the win.The Jamaican’s victory in Monaco was her third sub-10.70 run within a week and saw her become the first woman in history to break 10.70 six times in the same season. Her time also smashed the previous meet best of 10.72sec set by disgraced American Marion Jones in 1998. “I did what I needed to do and we had fun and let the clock do the talking,” said Fraser-Pryce.Lyles, who won the world 200m title last month, also set a meet record, clocking 19.46sec to improve on his previous mark of 19.65 set back in 2018. The American ran a powerful bend in a US cleansweep, getting the better of teenager Erriyon Knighton and world 400m champion Michael Norman.World and Olympic 1500m champion Kipyegon arguably produced the stand-out performance of an amazing night of track and field. The Kenyan ran the second fastest ever time over the distance as she won in 3:50.37, falling just half a second short of Ethiopian Genezebe Dibaba’s world record set in 2015, also in Monaco.“I have been chasing the time for quite some time but I am happy with the personal best,” said Kipyegon, who was left to bolt home alone after both pacesetters had done their jobs. “I knew this was the best place to get the world record but I am so disappointed I lost it in the last metres.”